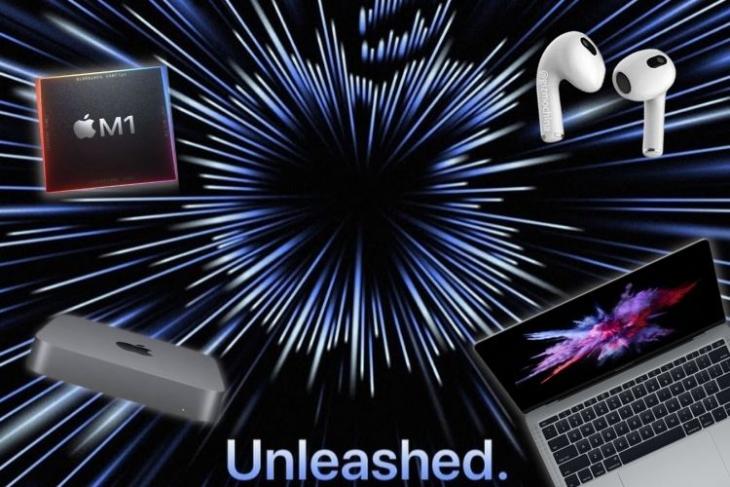 The first Apple fall hardware event saw the launch of the much-anticipated iPhone 13 lineup with a 120Hz ProMotion display and upgraded cameras. The Cupertino giant even surprised us with the unveiling of the revamped iPad mini 6. However, Apple is not done with hardware launches yet and recently announced a second fall hardware event. Dubbed the Apple ‘Unleashed’ event, the company is expected to take the wraps off its latest silicon, new Macs, and more on October 18. While the new MacBook Pro models are tipped to be the highlight of the event, the company most likely has other equally exciting announcements up its sleeve. Here is everything you should expect from Apple’s upcoming October 18 hardware event.

Faced with cut-throat competition from rivals and the growing discontent about the lack of innovative new features, Apple wants to reinvigorate the Mac lineup. While the desire to wrest the initiative on the back of the good showing by the M1-powered Macs appears to be on the track, will the 2021 Macs live up to the expectation? Though the actual revelation of the key specs is merely a day away, go and check out the leaked specifications and feature set of the upcoming M1X-powered MacBook Pros. We will also talk about the possible launch of a new Mac Mini and AirPods 3 at the event. So without further ado, let’s dive in:

Before we talk about all the products we expect Apple to unveil at its hardware event tomorrow, let’s quickly detail how you can watch the ‘Unleashed’ event. Just like other recent Apple events, this will also be a virtual launch and will be livestreamed on Apple’s official event page and YouTube channel on 18th October (Monday) at 10:00 AM PDT (1:00 PM EST, 10:30 PM IST, or 6:00 PM BST).

You can bookmark the official livestream links to watch the Apple hardware event tomorrow. We will also be covering the event in real-time on our website, so return back for more information on the upcoming products, which we will talk about below:

Rumors about the redesigned 14 and 16-inch MacBook Pro models have been floating around for a while now. And if some reliable reports are to be believed, we are likely to see Apple announce two new high-end MacBook Pro models at the upcoming event. Considering that the notebooks have been due for a new design for several years, all eyes are set on this major announcement.

Going by the leaked images, the 14-inch and 16-inch MacBook Pro will feature a flat-edged design in tune with the recently launched iPhone 13 series and iPad mini 6. Moreover, the notebooks will feature slimmer bezels for a modern look.

Another design element that might catch plenty of attention is the removal of the “MacBook Pro” branding from the bottom of the display. The reasoning behind this decision is simple. Apple wants to achieve an impressive bezel-free design and deliver more screen real-estate to its users.

Before we detail this rumor, we would suggest you take this with a pinch of salt. According to a rumor from Weibo, the upcoming 14-inch and 16-inch MacBook Pro models will sport a notch that houses the webcam. As per the report, the notch will be similar in size to the one found on the iPhone 12 series. Though I’m not sure how it will work with Apple’s existing desktop OS, I don’t think it’s out of the question.

Also, if you have been active on Twitter recently, macOS Monterey users have spotted that the Menu bar at the top is now thicker than it was in macOS Big Sur. They speculate that the increased thickness could be a hint for this upcoming design change – to accommodate the notch.

Knowing the fact that Apple is aiming for an edge-to-edge display, the inclusion of a tiny notch at the top with a better webcam appears to be in the realm of possibility. Rumors suggest that the 2021 MacBook Pros unveiling at the October 18 Apple event will sport an updated 1080p webcam, which would be a significant improvement. Currently, MacBooks come with a below-par 720p webcam.

After introducing a mini-LED display on the 2021 12.9-inch iPad Pro, Apple is now rumored to equip the upcoming MacBook Pro models with the same display technology. With the mini-LED technology, the laptops will have a thinner and lighter design. Moreover, it will also bring along many OLED-like benefits, including the high contrast, dynamic range, truer blacks, and wider color gamut support.

In an attempt to take on gaming laptops, Apple is expected to introduce 120Hz ProMotion refresh rate support on the new MacBook Pro models as well. With a higher refresh rate, the MacBook Pros will bring smooth scrolling and an enhanced gaming experience. Thanks to the variable refresh rate, it would also help conserve some precious battery life.

Based on display details leaked in a recent macOS Monterey update, True 2x retina resolutions seem to be on the cards for the upcoming models. The 14-inch and 16-inch MacBook Pros are likely to feature a display resolution of 3024 x 1964 and 3456 x 2234, respectively.

Without undermining the usefulness of Touch Bar, I would go so far as to say that it has remained by and large a “gimmick” that has failed to make the cut for most pros right from day one. So, if expert Apple analyst Ming-Chi Kuo is to be believed, Apple has decided to get rid of the Touch Bar in favor of the classic yet more user-friendly design.

“Touch Bars continue to be the #3 application with an 18% unit share and 1.2% revenue share in Q1’21. We expect Touch Bars to be exceeded by tablets when Apple starts the adoption of the 10.9” AMOLED iPad. Further, our sources suggest that Apple may cancel the Touch Bar in the future,” says a recent report from Supply Chain Consultants (DSCC).

Instead of the interactive OLED Touch Bar, the 2021 MacBook Pro models unveiling at the October 18 Apple event will feature a standard row of function keys. While it does sound like going back in time, it’s a wise move to get rid of the OLED touch strip and opt for physical keys to let you control certain functionalities.

With the introduction of 14-inch and 16-inch MacBook Pro models, Apple will completely ditch Intel chips. That means both the high-end MacBooks will boast the faster and more powerful Apple M1X chip. It has been rumored to be coming for a long time and will be a successor to the original M1 chip.

Equipped with a 10-core CPU that has eight high-performance cores and two energy-efficient cores as well as 16-core/ 32-core GPU, the M1X chip will put the MacBook Pro ahead of the competition in terms of speed and efficiency. Moreover, the base models for 14-inch and 16-inch MacBook Pros will have 16GB RAM, but they will have support for up to 64GB RAM. As for the storage, 512GB SSD storage will be standard across the board, with upgrades available at higher price points.

In what could be great news for creators who have been complaining about the lack of an SD card slot and an HDMI port on the MacBook Pro models since 2016, the tech giant is likely to add more ports to the upcoming notebooks. Yeah, it was back in 2016 when Apple radically ditched most ports in favor of just USB-C ports on the MacBook.

Additionally, the 2021 MacBook Pro models are also expected to bring back MagSafe magnetic charging in a more efficient iteration. The 14-inch and 16-inch Pro models that launch at the Apple event tomorrow could feature a MagSafe charging port that will deliver faster charging speed than is offered by the existing USB-C port.

With a refreshed design and the same Apple M1X chip that’s expected to power the new MacBook Pros, the 2021 Mac mini seems ready for a major upgrade. Going by the reports, the updated Mac mini will also be unveiled at Apple’s October 18 event.

Featuring a smaller form factor and a plexiglass-like top over the aluminum enclosure, the Mac mini will be more portable. It will have four Thunderbolt ports, an Ethernet port, an HDMI port, and two USB-A ports, as per reports. Also, the new Mac mini will use the same magnetic power connector as the recently launched 24-inch M1 iMac.

The shorter stems and a redesigned charging case will make the wireless earphones look modern. However, AirPods 3 will be available at a more affordable price point and won’t come with high-end features like Active Noise Cancellation. We will have to wait for the official event for more information.

Even though iOS 15, iPadOS 15, watchOS 8, and tvOS 15 were launched to the public in September, there is no word yet about the release of Apple’s latest desktop OS – macOS 12 Monterey. Since the new version of macOS generally comes later than the other software updates, the release date of macOS Monterey could be announced at the October 18 Apple event.

Since it’s touted to be a major event for Macs, it would be befitting to announce the release date of macOS 12 during the event. The latest 14-inch and 16-inch MacBook Pro models will likely be the first to ship with the latest macOS 12 update.

So that’s all we expect Apple to announce at the upcoming Unleashed hardware event on Monday. Personally, we are most excited to take a close look at the 14-inch and 16-inch MacBook Pro models. With a modern-looking design complete with all the essential ports, they look in line with our liking. That aside, we would also keep tabs on the AirPods 3 just to see whether or not they offer better audio quality and value than their predecessors. What are you most excited to see at the Apple Event tomorrow? Do let us know your expectations in the comments below.

AirPods 3 vs AirPods 2: Should You Upgrade?

Apple Might Launch the AirPods 3, Apple Music Hi-Fi Tier on May 18