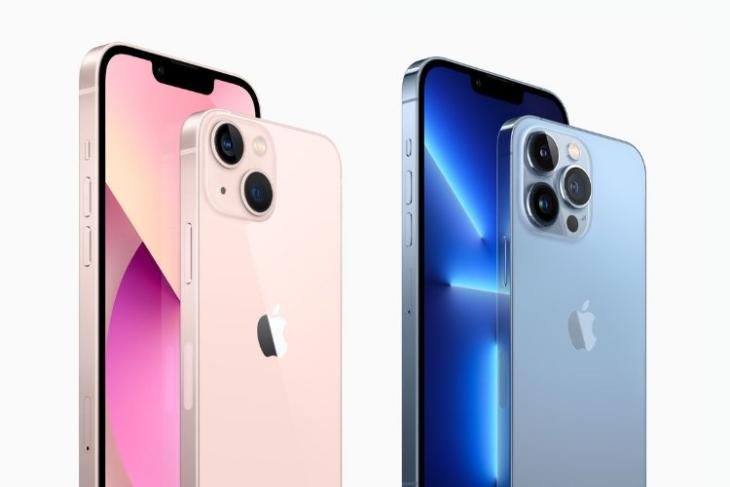 At its much-awaited California Streaming virtual event, Apple has taken the wraps off its next-gen iPhone lineup. Putting an end to the mystery, the company has dubbed it the iPhone 13 series. This new lineup includes fours models just like last year. The company hasn’t nixed the “mini” model just yet and brought substantial upgrades across the board. All the iPhone 13 models now have a smaller notch (finally!), Pro variants boast a ProMotion display, and much more.

Starting with the design, the iPhone 13 series boasts the same flat edge design as last year’s iPhone 12. You have an aerospace-grade aluminum alloy frame to offer sturdy construction aboard the iPhone 13 mini and iPhone 13. The iPhone 13 Pro and 13 Pro Max, on the other hand, boasts a surgical-grade stainless steel frame. These devices also have Ceramic Shield protection onboard to safeguard the display against cracks and scratches.

As many of you can already guess, the highlight of the iPhone 13 design is the new smaller notch at the front. Yeah, nearly four years after first debuting the Face ID-laden notch on the iPhone X back in 2017, the company has finally shrunk its size. How did Apple achieve this feat, you ask? Well, it managed to fit in all the Face ID components and selfie camera into a 20% smaller notch as compared to its predecessor.

While the iPhone notch may have gotten smaller, it’s nowhere close to the unintrusive experience offered by a punch-hole cutout (which is expected to be present in iPhone 14, as per leaks) offered by most Android phones out there. Heck, some phones like the Xiaomi Mix 4 and Galaxy Z Fold 3 include an under-display selfie camera to provide an even cleaner and immersive display.

A15 Bionic Chip & Other Internals

Under the hood, the iPhone 13 series is powered by the new A15 Bionic chipset. It is based on the 5nm architecture and includes a 6-core CPU, which includes 2 high-performance and 4 efficiency cores. You also have a 4-core GPU aboard the standard iPhone 13 models, which enable more intensive and power-hungry gaming experiences. The Pro variants include a 5-core GPU. Moreover, the chipset also includes a new ISP (image signal processor), new display engine, and faster neural engine and ML accelerators to enable the many AI features in iOS 15.

The standard iPhone 13 and iPhone 13 mini have dual cameras on the rear, with a new wide-angle sensor and a custom-designed ultra-wide camera with a new sensor. The primary camera supports sensor-shift OIS, which was first introduced in iPhone 12 Pro Max. Also, both the cameras now support up to 4K @ 60FPS video recording, which is great.

The iPhone 13 Pro and 13 Pro Max, on the other hand, feature a triple camera system on the rear. It now has a new primary camera with a larger f/1.5 aperture and 1.9 µm pixels, a new wide-angle camera with a wider f/1.8 aperture and macro photography support (up to 2cm), and a new 77 mm telephoto camera with 3x optical zoom. All three cameras here support Night mode, the primary camera has sensor-shift OIS support, and the camera app offers new photographic styles to capture even better pictures.

The iPhone 13 series supports a new Cinematic video mode, enabling users to shoot high-res videos on their devices. Apple also announced that it will roll out support for ProRes video on iPhone 13 series in the coming months.

By now, you would know that Apple does not like to share the exact battery capacity of iPhones. It simply talks in terms of battery life gains to make it easier for users to understand.