Skip to content
Home Internet What is a Chromebook? Everything You Need to Know

In the US, Chromebook has a 60% market share among students from kindergarten to the 12th grade. That’s quite a significant number, to begin with. Further, Google is bringing huge improvements to Chrome OS to make it a viable alternative against Windows and macOS. So if you are wondering what is a Chromebook exactly, well you have landed at the right place. In this article, we are taking a look at every aspect of Chromebooks beginning with its very definition. We have also discussed its operating system, headline features, the target users, whether you should switch from a Windows PC or not, and more. So having said all of that, let’s begin the article and learn more about Chromebooks thoroughly.

Everything You Need to Know About Chromebook and Chrome OS 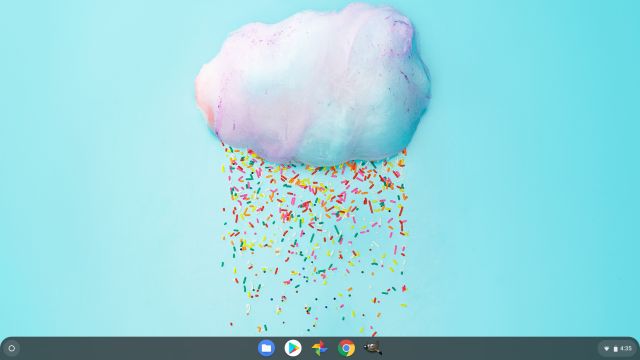 During its conception in 2009, Chrome OS was touted to bring a new era of consumer computing where applications and user data will remain in the cloud. However lately, we are seeing that Chrome OS is slightly moving away from that. We will discuss all these aspects of Chromebooks and Chrome OS in detail below, but in simple words, we can say that Chromebook is a lightweight computer that holds a lot of promise for the general consumers.

2. What are the Best Chromebook Features?

I would say the best feature of a Chromebook is that it’s not a demanding machine in terms of hardware resources which translates to exceptional performance and battery efficiency. Again, all of this is possible because of the lightweight operating system it’s running. As I mentioned above, Chrome OS intrinsically supports web apps only. So there are no system frameworks hardwired to the kernel except the Chrome browser. A Chromebook boots up in seconds and is ready to be used the moment you log in, unlike the laggy mess that is Windows OS. 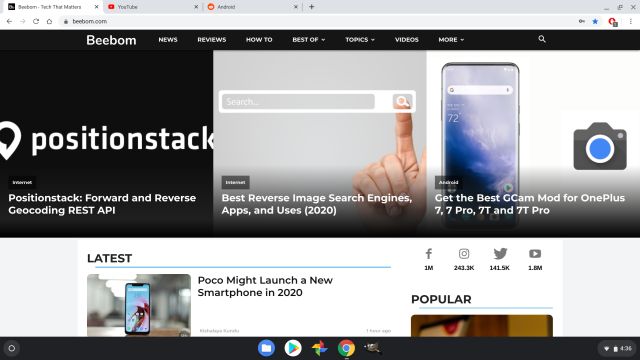 Since the operating system is so lightweight, it does not require much horsepower. You can easily do a bunch of tasks like watching videos, writing documents, sending an email on an inexpensive Intel Core M3 processor (for comparison, M3 is ranked much below the Intel Core i3). At the same time, the battery life remains stellar and you can comfortably get two days of medium usage in a single charge. Generally, you don’t need a powerful processor on Chrome OS unless you are compiling thousands of lines of code or creating CAD renders in the browser. Simply put, if you are moving from a Windows PC to a Chromebook, be ready to be surprised on these two fronts at least.

Contrary to popular opinion, you can now use Chromebooks offline. You might be thinking how is it possible to access a website, say for instance Google Docs without the internet? Well, Google has developed something called a PWA (Progressive Web App) standard that creates an offline wrapper of a website. It works and feels very much like a native app, but it’s essentially a web app created using the browser components. You can comfortably access and use web apps to the full advantage while being completely offline. As and when, you will be connected to the internet, all your files will be synced via Google Drive. 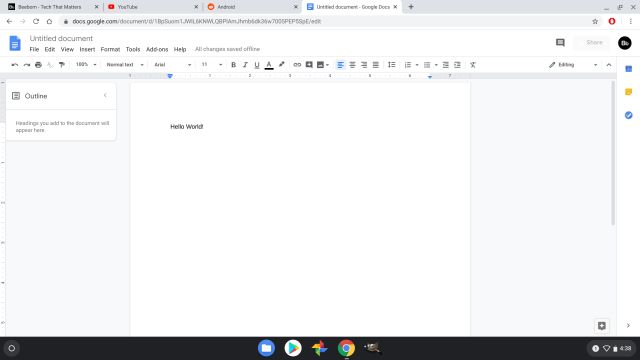 In the above section, I mentioned that Chrome OS is moving away from its foundational principle and this is what I was talking about. Now, you can use millions of Android apps on your Chromebook through the Google Play Store. While Android apps are far from being perfect on Chromebooks, it shows that Google is trying to bring native app support on Chrome OS. In case, you are wondering how it’s done, Google has baked in Android Runtime (ART) compiler on Chrome OS. It’s a layer that allows Chrome OS and Android apps to communicate with each other. 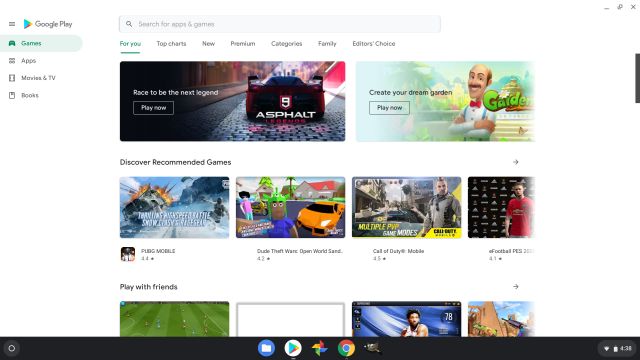 In simple words, an Android subsystem is installed on your Chrome OS which allows you to access Android apps without much friction. Also, there is support for Google Assistant which is part of the core OS and not a mere add-on. So, it becomes much easier to search using voice commands throughout your Chromebook and the web.

Similar to Microsoft, Google is also bringing support for Linux on Chromebooks. The project is still in beta, but the results are quite promising. You can virtually run any Linux apps on Chrome OS and that is a huge development. In my testing, the Linux Terminal worked flawlessly and it took only 0.25 seconds to download the Google homepage through the curl command. If you compare it with a Windows laptop running the Linux Shell (almost the same config), it took 1.04 seconds which is 4x more than Chromebook’s download time. Other than that, I also installed GIMP through Linux on Chrome OS and it went through flawlessly. However, the performance was not up to the mark as it was running in a container. Nevertheless, Linux support on Chromebooks is a great step for bringing students and developers into the Chrome OS fold and I hope it improves over time. 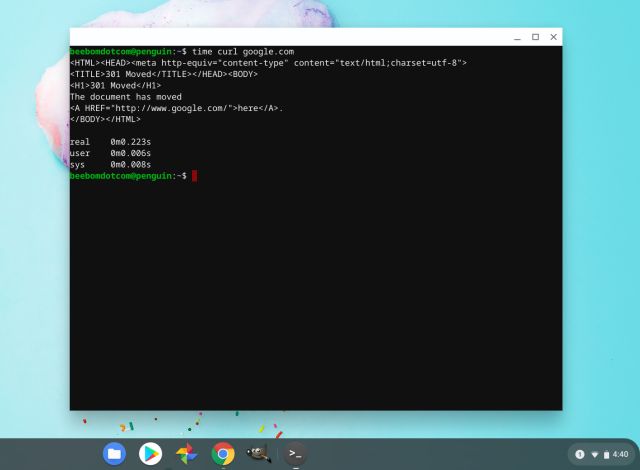 Security and seamless updates are one of the main aspects of Chrome OS. From the very beginning, Google has made it clear that users will not have to worry about security updates on Chromebooks. It’s because Chrome OS has something called a Seamless Update Mechanism where users don’t have to manually update the operating system or wait for the updates to be installed, unlike the horrendous Windows update system. As and when Google pushes the update and security patches, Chrome OS will automatically download it and install it on another partition. Now, whenever you restart your Chromebook, the boot slots are switched to the new partition and you get an updated OS without even realizing it. That is for me, one of the best features of Chromebooks. 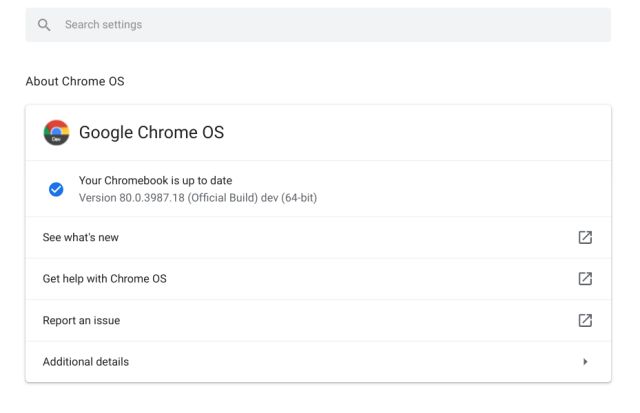 If you are considering to move from a Windows PC to a Chromebook, this section will help you make the decision. First of all, the difference between both the operating system is mainly in its objective. While Chrome OS is for a specific set of users with limited use-case, Windows is a matured desktop OS with support for innumerable native applications for all kinds of users. Further, Windows is compatible with both native and web apps and enjoys massive developer support from all over the world. Not to mention, Windows OS has almost become the de-facto platform for gaming. Simply put, Windows is for everyone irrespective of whether you are an average or a professional user. 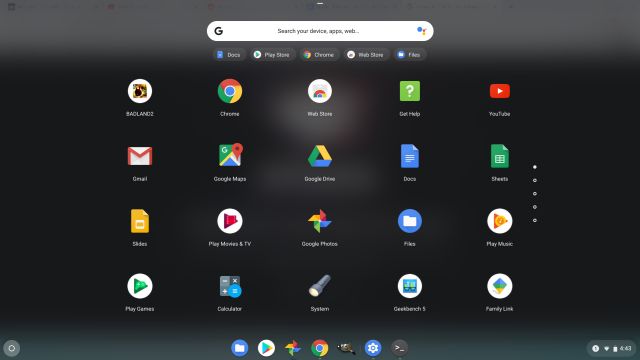 However, Chrome OS’s silver lining is that it’s great at delivering performance (even on a significantly slower processor) while maintaining stellar battery life. On both these counts, Windows does not match up with Chrome OS and that’s why Chromebooks have carved out a space for itself in the desktop market. Apart from that, you are not missing on the gaming front if you subscribe to Google’s game-streaming service Stadia. You can play desktop-class games on your Chromebook irrespective of the hardware and that is awesome. Not to mention, we are slowly seeing that Microsoft is following Google’s footsteps and decoupling Windows (e.g. Windows 10S, Windows 10X) to make it flexible and modular like Chrome OS. 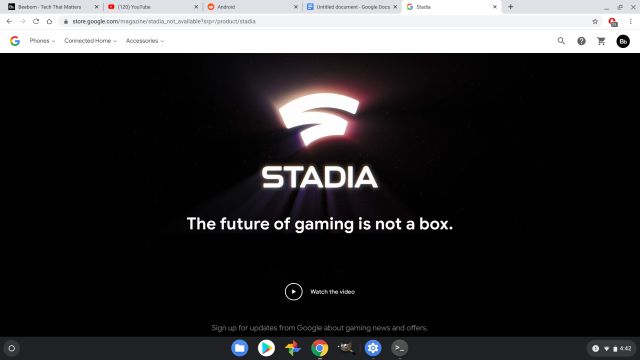 All this indicates that both the operating systems have their shortcomings and the companies are trying to improve their platform. However, at this point, Chrome OS is still nowhere near Windows as a full-fledged, desktop-class OS.

Each Chromebook has a specific end-of-life (EOL) date which generally lasts for 5-6 years. It means that you will get updates and security patches directly from Google only within the EOL period. Also, keep in mind, the EOL period does not start when you buy the Chromebook, but it gets activated when the product is certified by Google, much before the actual release date by OEM.

In contrast, Windows update is not tied to specific computer models. As long as Microsoft continues to support an operating system, you will get the update no matter what. This is where Google’s policy on Chromebook updates gets murkier and it’s really disappointing. Basically, after the EOL, you will not get any security patches on your Chromebook making your computer vulnerable to security threats. And you can’t even install Windows on your Chromebook because the process is extremely complex and out of the way for any average user. So, if you are going to buy a Chromebook, make sure to check the EOL date.

4. Is Chromebook For You?

To put it simply, if most of your work is done on a web browser then Chromebook is the best piece of hardware that you can opt for. It’s miles ahead of Windows laptops in terms of both performance and battery life. You can use it for writing, creating presentations, watching movies and videos and basically every general task that most people do on their computer. Also, with the addition of Linux, students can do programming (supports Vim) and a lot more. And in case, you are an Android developer, there is native support for ADB (Android Debugging Bridge) as well. 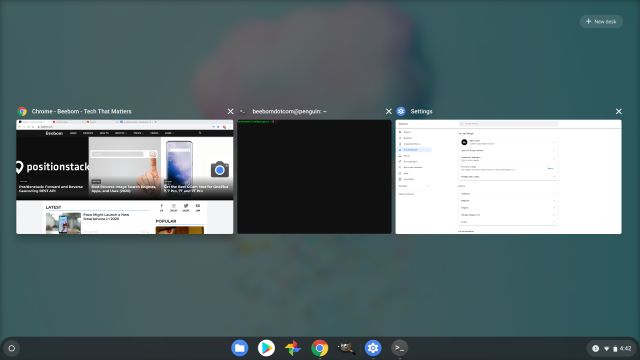 Having said that, if you have a dedicated use-case like graphic designing, CAD rendering or video editing, etc. which requires a powerful native application then Chromebook is not for you. It has a limited scope and Chromebook is broadly targeted at general users, students, and developers. If you are one of them, you can definitely pick a Chromebook without any hesitation.

Are You Getting a Chromebook?

So that was our deep dive into the current state of Chromebooks. We have tried to include each and every aspect of Chromebooks so you can take an informed decision. As a user of both Windows and Chrome OS, I feel Chrome OS is not tightly put together which makes it an immature desktop-class OS. However, if you are a casual user, you can easily pick one of the inexpensive Chromebooks from the market. It will not disappoint you for sure. So that is all from us. If you found the article informative, do comment down below and let us know.