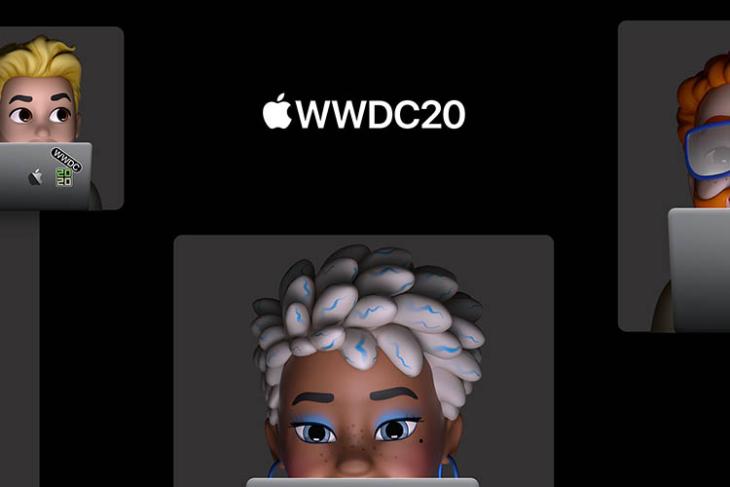 We are just two days away from Apple’s annual developer conference. WWDC 2020 is all set to happen in a first ever online-only format this year. However, that doesn’t mean there’s less to look forward to. If anything, we have quite a bit to see this year at WWDC. So, here’s everything we expect to hear from Apple at this year’s WWDC keynote.

This won’t be the first announcement by any means, but I’m putting this here because it is one of the most exciting ones. Apple will show off new features that will make their way to iPhones later this fall with iOS 14. We are expecting a whole bunch of new stuff. That includes new iMessage features, an AR app called ‘Gobi’, home screen changes, support for widgets, and much more.

iMessage is probably getting a bunch of interesting features this year. This includes a new typing indicator for group chats. So you will be able to see who is typing in a group. Right now, this doesn’t exist, so you can never know if someone is responding to a message you sent on a group.

It’s also rumoured that iMessage will get support for mentions. This is similar to the WhatsApp feature and will let you mention specific people in group chats to grab their attention to a message.

There are also reports that the Find My app will get a new, highly useful feature. You will now be able to set alerts if a person doesn’t reach a specified place at a set time. This can be used to ensure that kids are reaching school on time, among a bunch of other use-cases.

Apple is also making improvements to the iCloud Keychain. For those who don’t know, this is the built-in password manager that syncs across Apple devices. With iOS (iPhoneOS) 14, iCloud Keychain will start warning you if you are reusing your passwords across websites.

This way you can ensure that your passwords aren’t being reused. After all, reusing passwords isn’t a good security practice.

For iPads, the Apple Pencil will be getting some updates it seems. Majorly, you will now be able to use the Apple Pencil to write text in any text field. This means you can fill up forms by simply writing in them. Your iPad will automatically convert handwritten text into standard text before sending the form on its way.

This is going to prove really handy, for everything from emails, notes, messages, to calendar entries, and web-forms.

There are also rumours floating around that Apple will rename iOS 14 to iPhoneOS 14. I don’t know how true that is, but it sounds plausible. Especially considering that last year we got iPadOS as well. Anyway, you can check out our article to learn more about our iOS 14 expectations including all the features and changes we hope to see this year.

Apple will release a developer beta of iOS 14 post the event, and a public beta should follow soon. However, the stable release for iOS 14 will only happen in the fall.

Last year, Apple released macOS 10.15 Catalina with a bunch of new features and changes. This year, the company will launch macOS 10.16. Not a lot is known about the upcoming version of macOS.

However, expect some puns and jokes from Craig Federighi at the name reveal, and the feature walkthrough. That part is always my favourite.

While there haven’t been many leaks or reports about macOS 10.16, we do expect some improvements to iMessage to make their way to macOS. There have been reports that Apple will replace the Messages app on the Mac with a Catalyst version of iOS’ Messages app. This means you should get all the iMessage features on the Mac as well. Including message effects, mentions, and all the changes coming to iMessage with iOS 14.

Similar to iOS 14, we will get a developer beta for macOS 10.16 post the event, with a stable release in the fall.

Normally I’m not that excited about watchOS updates. However, since I have now started using an Apple Watch, I am rather hyped to see what Apple brings to the table for the Apple Watch.

More importantly, watchOS 7 will bring a new kids-mode. This will include a new Activity app that measures movement time instead of calorie burn. There are also reports of a new SchoolTime feature. This will allow parents to decide what apps are available to the kid during specified school hours.

As is the case every year, watchOS 7 will also have new watch faces in tow. Reports suggest a new ‘Infograph Pro’ face with a built-in tachymeter. I’m not sure how I feel about that, but considering the Infograph and Infograph Modular are two of my favourite faces on the Apple Watch, I’m inclined to give it a try.

Also, watchOS 7 will likely have some features that the Apple Watch Series 6 will make use of later this year. These might include blood pressure monitoring, and measuring blood oxygen levels. If you’re interested, check out our article on watchOS 7 features we are most excited about.

As far as operating systems are concerned, this is the last one on the list. tvOS 14 will be announced on stage at WWDC 2020. Similar to macOS 10.16, we don’t know much about this either. However, we do know that the Apple TV will get a Fitness app, similar to the one on iOS 14.

There are also rumors of a new ‘permanent audio’ option which will let you set a HomePod or another speaker as the permanent output device for your Apple TV. The Apple TV might also get Screen Time this year, so you can track your TV watching habits. Apart from that, we can expect some more screensavers from Apple.

As I mentioned before, details around tvOS 14 are scarce, so there may be a lot that we don’t know yet that could be announced at the keynote, so stay tuned.

There are many rumours floating around the internet suggesting an iMac redesign. The iMac has not seen a design refresh since 2012, so it’s definitely in the cards. Reports suggest that Apple will move the iMac to a more bezel-less design, similar to the iPhone and iPad Pro. The new iMac is also rumoured to feature Face ID.

Reports suggest the new iMac will come with a T2 security chip, along with AMD Navi graphics, and SSD storage. That’s actually a good idea because the Fusion drives in current iMacs are not that great.

Other rumors suggest that Apple will use Intel’s new Comet Lake chipsets in the iMac. The computer might be launched in at least one 23-inch model. However, thanks to the reduced bezels, the size of this iMac will be almost the same as the current gen 21.5-inch iMac.

We don’t know when the new iMac will be available to purchase, if Apple launches it at all. However, rumours suggest a launch in the second half of 2020.

Apple has long been rumoured to start using its own ARM-based chips in Macs. Recent reports suggest that the company will finally announce a roadmap for the switch at WWDC 2020. Bloomberg is reporting that the company will unveil an ARM-chip for the Mac at the conference. However, that doesn’t mean we will get to see a Mac powered by the processor at the event. Apple is expected to launch the first ARM-based Mac sometime in 2021.

Rumours around the chip suggest that the company’s first ARM chips for the Mac will be 12-core processors. These will likely have 8 high performance cores and 4 efficiency cores.

Using its own chips inside the Mac will prove advantageous for Apple. It will allow the company to release Mac updates without being tethered to Intel’s chip release schedule. Moreover, ARM chips will offer better efficiency, which should result in battery life improvements on MacBooks.

While WWDC 2020 is all about software and developers, there are a lot of rumours suggesting hardware announcements as well.

The company might unveil the Tile-like AirTags at the event. Images found in the source code for iOS 13 suggest that AirTags will be small and round, and will be integrated with the Find My app. They will also use the Ultrawide Band chip on the iPhone 11 series for better location tracking. There are also rumours of an AR component to AirTags that will help you find lost objects using AR.

The AirPods Studio may come with Active Noise Cancellation, equaliser settings, and more. There are also reports that the AirPods Studio will use head/neck detection to automatically play/pause music.

While we don’t know the price of the upcoming headphones, they are rumoured to be priced at $349. Clearly, a high-end price point. However, reports also suggest that the company will launch a slightly more affordable version of the AirPods Studio aimed at fitness use-cases.

I know what you’re thinking, AirPower was scrapped. That’s right. However, there are reports that the company is still working on a smaller charging mat that’s similar to the AirPower. Noted tipster Jon Prosser recently tweeted that ‘AirPower isn’t dead’. What’s more, reports coming out today suggest that the company has tested Apple Watch charging with the AirPower.

There are also rumours of a refreshed Apple TV in the works. The new Apple TV will likely feature the A12X Bionic chipset, new storage options, and a redesigned remote.

Get Ready for the First Ever Online WWDC 2020

WWDC 2020 is the biggest developer event for Apple. The company almost always has something exciting to showcase at the event other than the usual software updates. Moreover, with this year’s event being completely online, the company might try some new tricks to make it more attractive for viewers and attendees. While the Keynote is always also streamed live, this year all the developer sessions are also being held in an online-only format. Let’s see what else Apple has planned for us at the event. We will be covering everything as it happens, so stay tuned.