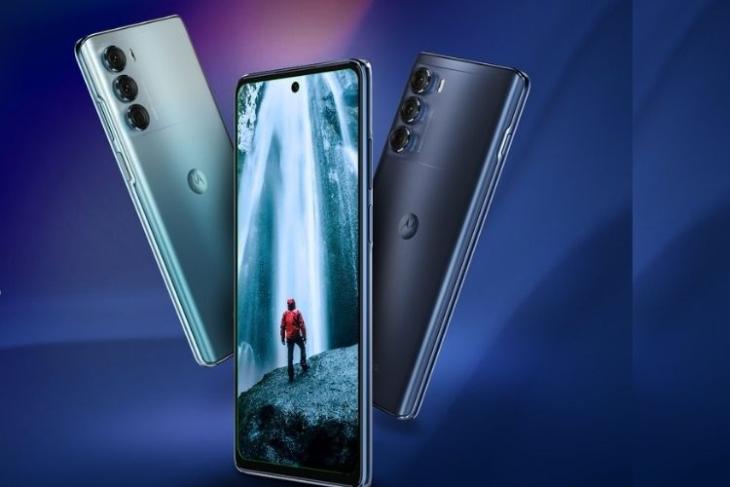 Motorola has introduced a new flagship smartphone in its Moto G series — the Moto G200, in addition to 4 more phones. The smartphone succeeds last year’s Moto G100 and is a mixture of high-end and attractive specifications, including 108MP cameras, a 144Hz display, and the Snapdragon 888+ 5G chipset. Speaking of, it is the first Motorola phone to come with Qualcomm’s current flagship mobile platform. Here are all the details.

The new Motorola smartphone looks similar to the recent Motorola Edge 20 phones, except the rear camera bump is more identical to the Oppo Reno 6 series.

The smartphone comes with a 6.8-inch Full HD+ display with support for a 144Hz refresh rate. But, it has an LCD display type. As mentioned earlier, it is powered by a Qualcomm Snapdragon 888+ SoC, coupled with 8GB of RAM. There are two storage options to choose from: 128GB and 256GB.

The camera department gets a 108MP main camera, a 13MP ultra-wide-macro camera, and a depth sensor. There is a 16MP front camera. The phone supports 8K video, 960 fps slow-motion video, and other video recording options. It is backed by a 5,000mAh battery with 33W fast charging capabilities.

Additionally, it comes with 5G support and IP52 water resistance. The Moto G200 starts at 450 Euros (around Rs 37,900) and is now available in Latin America. It will soon reach Europe too.

Besides a flagship offering, Motorola has also launched 4 mid-range and budget phones in the form of the Moto G71 5G, the Moto G51, the Moto G41, and the Moto G31.

The Moto G51 comes with a 6.8-inch LCD 120Hz screen, a Snapdragon 480+ SoC, 50MP triple rear cameras (much like the Moto G71), a 5,000mAh battery, Dolby Atmos, IP52 certification, and more. It will launch in Europe first and will eventually reach India, the Middle East, Latin America, and Asia.

The Moto G41 includes a 6.4-inch OLED display, a MediaTek Helio G85 chip, 48MP triple rear cameras with OIS, a 5,000mAh battery with 30W fast charging, IPX2 water resistance, and more. The Moto G31 is similar to the Moto G41, except it gets 50MP triple rear cameras and 10W fast charging. It is priced at 200 Euros (around Rs 16,800) and will launch in Europe in the few weeks, followed by a launch in India, Latin America, Asia, and the Middle East.