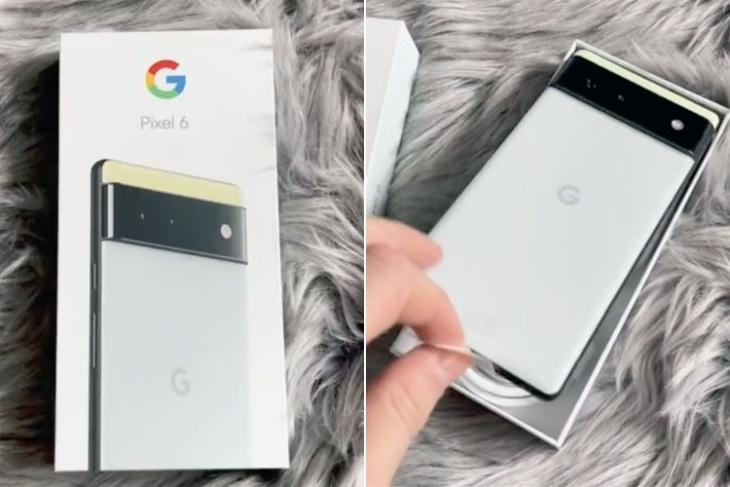 After officially unveiling the Pixel 6 series earlier this year, Google has been pretty transparent with its upcoming flagship devices. Plus, we have seen the Pixel 6 and Pixel 6 Pro in a myriad of leaks and reports ahead of its official launch. Now, hours before the official launch, someone has unboxed a retail unit of a Pixel 6 in a now-deleted video. However, the person did not turn on the device for the viewers to see the screen. Other than this, the official prices of the Google Pixel 6 series have leaked over the past weekend, thanks to a US retailer.

Starting with the unboxing of the Google Pixel 6, a person named Christian Dimboiu recently shared a video of himself unboxing a retail unit of the Pixel 6 on TikTok. He unboxed the “Sorta Seafoam” green-colored Pixel 6 and took it out of the box. However, he did not turn on the screen of the device.

Now, after the video was posted on TikTok, it was deleted soon after. Moreover, it was later uploaded on Twitter, although it was later taken down from there as well. However, since the video was available on Twitter for quite a while before being deleted, it has been reuploaded by several users on Twitter. So, feast your eyes on the first Pixel 6 unboxing right here!

As per reports, the unboxing experience of the Pixel 6 was just like any other smartphone. However, one notable thing about the unboxing is that the smartphone was placed upside-down inside the box to showcase the rear cameras at first glance. Plus, as confirmed by Google previously, there is no charging adapter included in the Pixel 6 box.

Meanwhile, there has been a lot of speculation about the prices of the Pixel 6 and the Pixel 6 Pro. However, ahead of the official launch of the devices today, M. Brandon Lee from This is Tech Today has spotted the official prices of the Google Pixel 6 series in Target’s (US retail store) inventory system recently. You can check out the tweet from the tipster attached below.

Although these prices seem to be legit, we recommend you wait for Google to unveil the devices at its Pixel Fall Launch event today to know the official pricing and availability details. We will cover the event in real-time, so stay tuned for the latest updates.