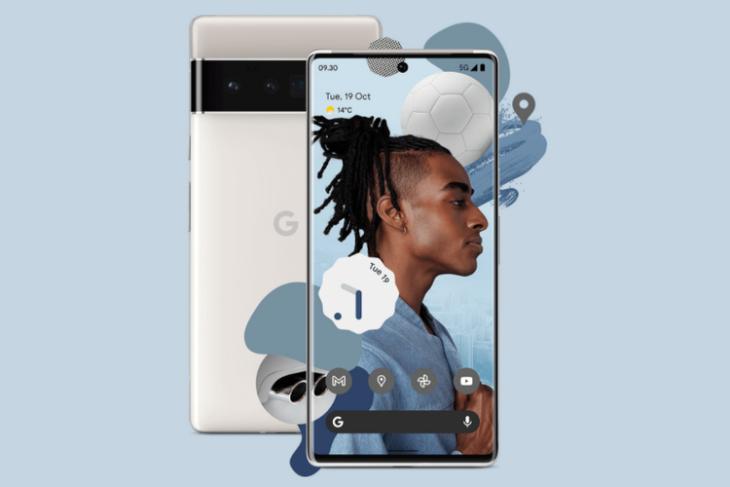 If we were to give an award for the most leaked tech product of 2021, Pixel 6 will emerge as the undefeated champion. After an extensive round of leaks and rumors, Google has finally unveiled the Pixel 6 and Pixel 6 Pro at its Fall launch event today. The Pixel 6 series is the first phone from the tech giant to feature an in-house chipset — Google Tensor, instead of Qualcomm’s Snapdragon chips. With Tensor chip, flagship camera sensors, and Android 12, the Pixel 6 and 6 Pro are the most significant Pixel phones in years. Read on to know the complete specifications, pricing, and availability of Google’s flagship Pixel phone.

As Google confirmed earlier this year in its announcement preview, Google is dropping the XL moniker with Pixel 6 phones and will use ‘Pro’ branding for the bigger variant. As a result, we have Pixel 6 and Pixel 6 Pro in this year’s lineup of flagship Pixels.

Starting off with the design, the major visual difference is the presence of a new camera bar reminiscent of the classic Nexus 6P. The new camera bar houses the camera modules and the rear LED flash. With its distinct camera bar, you’ll have no trouble distinguishing the Pixel 6 from the myriad of Android phones out there.

At the front, Pixel 6 sports a flat display while the Pixel 6 Pro flaunts a curved display. Google has used a polished aluminum frame on the Pixel 6 Pro. The regular Pixel 6, on the other hand, will feature a matte aluminum finish. Google says both of these finishes feel great in hand, but we will have to test that out ourselves.

The Pixel 6 series also equips Titan M2 security chip to keep your personal data safe. With the Titan M2 chip, Google says Pixel 6 series has the most hardware security layers in any phone. Speaking of security, you finally get an in-display fingerprint scanner for unlocking the Pixel 6 and 6 Pro.

If there’s one aspect in Pixel hardware Google was reluctant to change over the years, that’s the rear camera. The company has been using the same 12.2MP Sony IMX363 sensor since 2018 when it launched the Pixel 3. And that’s for the good reason. By sticking to the camera module, Google was able to leverage computational photography to offer flagship-grade camera outputs. However, things are changing for the better in the Pixel 6 series, with Google adopting larger camera sensors.

So, what do these sensors truly mean for the Pixel 6 series? Well, they unlock a bunch of cool new camera features here. The new camera features included in the Pixel 6 series are Face Unblur, Magic Eraser, Motion mode, and improved Night Sight & Portrait mode. While Face Unblur attempts to deblur faces in images to make them sharper and usable, Magic Eraser helps you remove unwanted objects and people from your image. Motion mode is a feature to add more depth to action shots involving moving subjects.

Apart from these, Night Sight now captures 150% more light than the Pixel 5. You also get improvements to Portrait mode that better detects different skin tones.

Pixel 6 Software: Android 12 with Material You

Although Google released Android 12 on AOSP earlier this month, the company has now started rolling out the update to all compatible Pixel phones. That changes with the Pixel 6 launch as Pixel 6 and 6 Pro are the first to launch with Android 12 out of the box.

Android 12 brings noteworthy additions to the OS, including Material You wallpaper-based system, the privacy dashboard & indicators, redesigned Quick Settings and notifications panel, and more. You can check our coverage of the best Android 12 features to know all the exciting changes Android 12 brings.

Google is promising three years of Android updates and five years of security updates for the Pixel 6 series. Since the device ships with Android 12, you could expect to receive updates up to Android 15 and two extra years of security patches if you’re planning to purchase the phone.

The Pixel 6 packs a 4,600 mAh battery, while you get a larger 5,000mAh battery pack on the 6 Pro. Both devices support 30W wired fast charging and 23W wireless charging. It’s worth mentioning that Google has decided not to include the charger in Pixel 6’s box following Apple’s lead.

Pixel 6 is priced at $599 for the base variant. If you are interested in the Pixel 6 Pro instead, it is available at a starting price of $899. You can pre-order the Pixel 6 series today and it will start shipping on October 28. Second-gen Pixel Stand is sold separately and is coming soon at $79. Check out the exact prices below:

Pixel 6 and 6 Pro will be available to buy in the following nine countries on October 28th:

The Pixel 6 series will make its way to three additional countries, including Spain, Italy, and Singapore, early next year. So yeah, as we had expected, Google’s latest flagship phones won’t be launched in India.

The Much-awaited Revival of Flagship Pixels!

This year’s Pixel phones mark an important milestone for Pixel phones. Other than the obvious Tensor chip upgrade, the Pixel 6 and 6 Pro bring meaningful changes, including an in-display fingerprint scanner, new camera sensors, a 120Hz display on the Pro model, and faster charging speeds. If you are confused between the two new flagship Pixels, we have an in-depth Pixel 6 vs Pixel 6 Pro comparison that will help offer some clarity.