Just like Safari for macOS Big Sur, its iOS counterpart has also got some notable features in iOS 14 including the built-in translation tool. Whether you are a news writer who often has to go for extensive research or a student who needs a quick translation tool to translate reports during a case study or a curious person who likes to explores different articles, you would appreciate having an efficient translation tool at the disposal. Let me show you how you can translate web pages in Safari on your iPhone and iPad.

How to Translate Webpages in Safari on iOS and iPadOS

Right now, Safari’s built-in translation tool supports only a few languages including English, Spanish, Brazilian Portuguese, French, German, Russian, and Chinese. Besides, it’s currently available only in the US and Canada.

What if your device is not running iOS 14 or the language which you want to translate isn’t supported? Needless to worry as this is where a third-party translation app like Microsoft Translator comes into play. With the support for several languages and the availability in many countries, it has got you fully covered.

1. Open Safari on your iPhone or iPad and then head over to the web page which you want to translate. Now, tap on the action button located on the left side of the address bar.

2. Next, tap on the Translate to [Your Device Language] option. If asked, tap on Enable Translation. 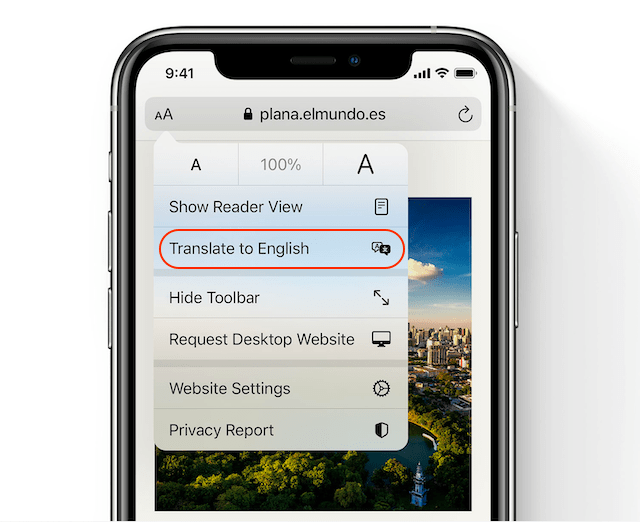 The web page will be instantly translated into the primary language which you have selected on your device.

There is also a quick way to revert back to the page’s original language. To get it done, tap on the translate button in the Safari address bar. After that, choose View Original.

Microsoft Translator is far more efficient and versatile that the built-in translation tool in Safari. So, you shouldn’t worry if your device isn’t running iOS 14 or you don’t live in the USA or Canada where the Safari translation is currently available.

Microsoft Translator is available for free and works efficiently in translating Safari web pages on the iPhone and iPad running iOS 10 or later. Notably, it supports more than 60 languages and also allows multi-person conversations with up to 100 people across multiple languages. Before proceeding with the tutorial, make sure to install the app from link above.

1. On your iPhone or iPad, launch Safari and then navigate to the web page that you want to translate.

2. After that, tap on the Share button at the bottom.

3. Next, scroll down and choose Translator.

That’s it! It will quickly translate the entire web page.

So, that’s how you can translate Safari web pages on your iOS or iPadOS device. While I’m quite happy with the introduction of a built-in translation tool in Safari, I’m a bit disappointed with its limited availability. As iOS 14 is still in beta, Apple has more time to refine it. So, I expect the tech giant to make Safari translation available in several other countries.

As we are talking about iOS 14, I would suggest you take a peek at these iOS 14 related topics like how to customize widgets, how to use power reserve mode, and how to enable picture-in-picture mode as they are equally interesting.