While Google Photos may still claim to rule the roost in terms of versatility and intelligence, Apple Photos has slowly but steadily covered a lot of ground. Apart from adding some notable privacy-centric features like the ability to limit third-party app access, the app has also introduced several neat features such as filters and a better way to hide the hidden album. Another cool addition worth mentioning is Sorting. As the name itself suggests, it allows you to sort images and videos in the Photos app in iOS 14 on your iPhone and iPad. If you think that your photo library deserves a better organization, let’s give it a shot!

The newly introduced sorting feature lets you organize images three ways: Newest to oldest, Oldest to newest, and Custom order. Depending on in which order you want your memories to appear, you can choose the desired order.

Though the sorting tool is quite simple to use, it’s slightly hidden into the shelves of several features that have arrived in the latest iteration of iOS. That’s the reason why I couldn’t notice it initially. And I guess, your story might not be too different.

2. Now, tap on the Albums tab at the bottom.

3. Next, choose the album which photos and videos you want to sort.

4. Next up, tap on the three horizontal dots at the top right corner.

6. Finally, select the preferred sorting option. As mentioned above, you have three options to choose from: 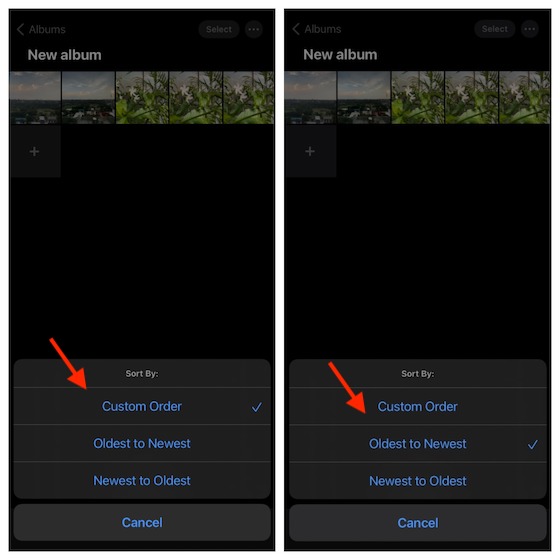 That’s pretty much it! The change would come into effect instantly and your images will begin to appear in the desired order.

If you ever want to change the sorting order of your photos, return to this same menu by following the steps mentioned above and then select the preferred option in the end.

Perfectly Sort Photos and Videos on iPhone and iPad

So, that’s the way the all-new sorting feature works in the Photos app. It can play a vital role in keeping your shots in the right order. Whether you prefer to keep your images perfectly organized or want to make exploring a tad easier, it will have a role to play.

As we are talking about iOS 14, I would recommend you to check equally cool new additions like the Photos widget, the ability to set default browser/mail, and sleep tracking. Have any feedback or question? Feel free to send it across through the comments section below.