Charmed by the plethora of all-new features, you downloaded the iOS 15 beta on your iPhone to take the pre-release software for a test drive. However, days after installing the beta, you desperately want to downgrade from iOS 15 beta to iOS 14 due to a series of unexpected issues and bugs that have proved to be a nightmare. Fret not, there is a pretty reliable way to downgrade from iOS 15 and go back to iOS 14. And that’s what I’m going to guide you through in this post.

Downgrading from an iOS beta software update to an old iOS version is a tedious affair. Besides, it also comes with some painful caveats that you need to keep in mind before moving forward with the process. Moreover, this process will also work if you want to downgrade from iPadOS 15 beta to iPadOS 14. So without further ado, let’s check out the steps.

Put your iPhone into Recovery Mode

There is, unfortunately, no single switch to go back to the older version of iOS from the beta software update. So, we will have to take the help of Recovery Mode to delete the iOS 15 beta software profile and downgrade to the latest stable version of the software. Just follow the steps below:

2. Now, connect your iOS device to your computer using a cable.

3. Next, it’s time to enter the recovery mode.

Downgrade Your iPhone from iOS 15 beta to iOS 14

If Finder or iTunes doesn’t launch automatically, make sure to open it manually. Once iTunes has detected your device in recovery mode, it will ask you what you want to do.

1. Now, click on the “Restore” button in the pop-up window. 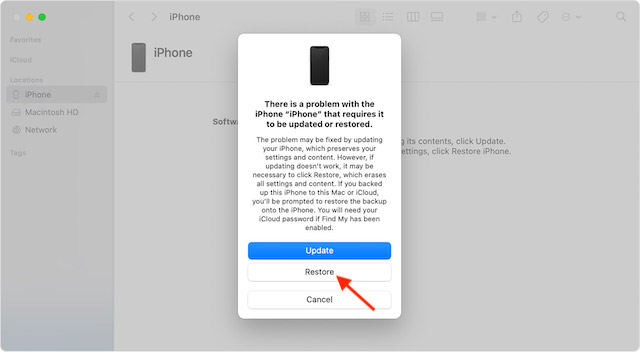 2. Next up, click on “Restore and Update” to confirm your action.

Note: If your iPhone or iPad reboots to iOS 14 before the download is complete, make sure to repeat the steps above and put it back into Recovery Mode.

Restore Your Archived iOS 14 Backup to Your iPhone

After your device has been restored, it will be running the latest stable version of iOS 14. To get your data back, restore the device from a previous backup.

4. In iTunes or Finder, click on “Restore Backup” under the General section.

5. Next, select the archived backup you made before installing the iOS 15 beta software update. After the restore is complete, your iPhone should be back to where it was before you installed the iOS beta update.

Downgrade from iOS 15 Beta and Go Back to iOS 14

That’s it! Hopefully, you have successfully downgraded your iPhone from iOS 15 beta to iOS 14. I wish there were an easier way to upgrading and downgrading the software, but there isn’t one at the moment. So until then, make the most of this method to ditch the pre-release version of iOS and go back to a stable version. With all that said, do you have any feedback or questions? If yes, be sure to let us know in the comments section below. Plus, share your opinion on some of the most talked-about iOS 15 features like the ability to watch movies together on FaceTime, Notification Summary, Focus Mode, Apple Digital Legacy, extensions support in Safari on iPhone, and more.