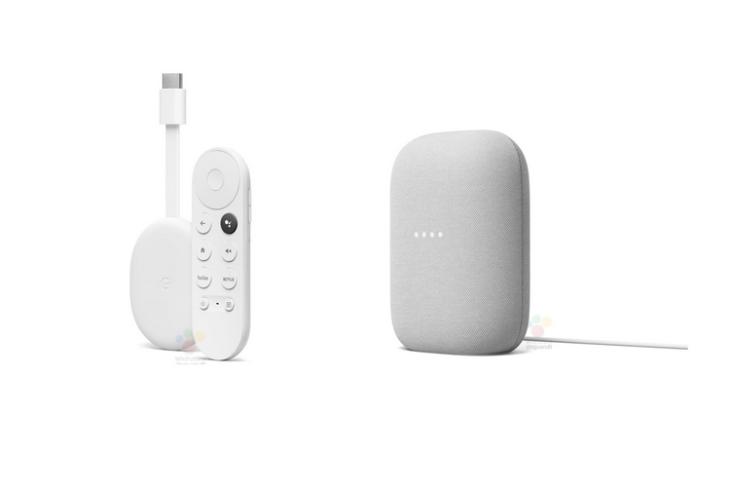 While Google is expected to launch its new Chromecast, Nest smart speaker alongside the Pixel 5 on September 30, the latest report on WinFuture shows the allegedly official images of the Chromecast with Google TV and Nest Audio speaker.

The upcoming Chromecast dongle, codenamed ‘Sabrina‘ has been in the news for a while now. The device is said to be powered by a quad-core AMLogic S905X2 SoC along with 2 GB of RAM.

The leaked images show the device in its oval form-factor, just like what we’ve seen before. It shows an attached HDMI cable to connect to the TV or display. The dongle will charge through a USB-C port. In terms of the software, the device will flaunt the latest version of Android TV, which is reportedly being rebranded to Google TV.

The remote features dedicated buttons for Google Assistant, YouTube, and Netflix along with other basic controls like the D-Pad, Home, Back, and Mute buttons. You also get dedicated volume buttons at the side of the remote, which should be convenient for easily controlling volume. Take a look at all the leaked images below:

In a separate post, Roland Quandt of WinFuture has also shared the images of Google’s latest smart speaker. The software giant had teased the product with an official image back in July. The product will launch in two color variants namely Charcoal and Chalk.

The new Nest Audio speaker will succeed the original Google Home. You get a fabric-covered design that Google has been using in its recent smart speaker models. The four LED indicators are present on the front side, towards the center portion of the speaker. The rear side accommodates microphones, the power cable, and the mute switch to disable voice recognition if needed.

We will learn more in terms of the pricing and availability when Google officially unveils these devices on September 30. While the “Chromecast with Google TV” is rumored to be priced around $50(~Rs.3,600), the new Nest Audio speaker may go on sale around 100 Euros (~Rs.8,700).