Many users don’t opt or recommend even the latest Chromebooks because it lacks many of the creative suite of apps from Adobe and Microsoft. While that is true, things seem to be changing now thanks to the introduction of Linux and Android app support on Chrome OS. Now, you can edit photos, create vector graphics and continue editing your heavy PSD files on Chromebook seamlessly. So in this article, we bring you the 10 best photo editors for Chromebook that you should use in 2020. Most of these apps are offline photo editors so you can comfortably edit your pictures without internet access. Now on that note, let’s go ahead and unpack the list to find your choice of photo editor.

Best Photo Editors for Chromebook in 2020

Here, we have mentioned 10 versatile image editors which not only deal with photos but also allow you to create vector graphics, comics, banners and much more. To your surprise, we have also included a Microsoft Paint alternative for Chromebooks. Also, out of the 10 apps included here, 7 photo editors are completely offline so you can use them anytime and anywhere without requiring the internet.

Before we start, make sure you have set up the Linux container for installing Linux apps; enabled Play Store (head to #12) for Android apps and GPU acceleration for better app performance on your Chromebook. Now having done that, let’s jump to the list altogether.

Thanks to Linux support, we are no longer limited to Web and Android apps on Chromebook. Now you can install and reliably use many of the excellent Linux apps including powerful photo editors. So, if you are looking for the best photo editor, may I recommend the popular open-source, free and cross-platform program called GIMP? Yes, you can use this awesome program on your Chromebook and it runs quite well after the last few updates. 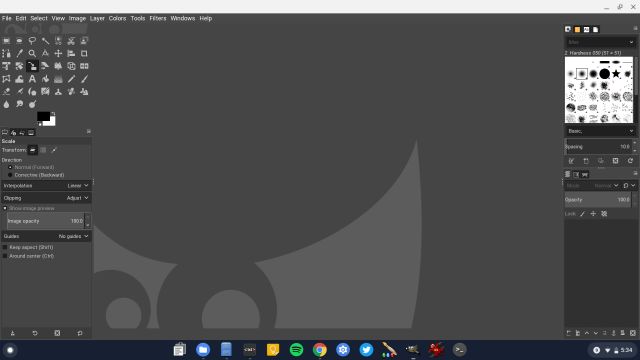 The UI is quite similar to the ones we have on Windows and the features are the same without any omission. The best part is that, after the GPU acceleration support on Linux, the performance has taken a huge leap. You can create and manipulate images on the fly; take advantage of layers and advanced tools like lasso, liquify, cage transform and innumerable other things. To put it straight, if you want a capable Photoshop alternative on Chromebook, GIMP is the best photo editor you can opt for.

If you are someone who can’t live without Adobe Photoshop and need all the powerful tools and features then go with Photopea. It’s a web app that is strikingly similar to Photoshop’s UI and supports PSD (Adobe Photoshop), XCF (GIMP), RAW and SKETCH file formats. Sure, it’s not a native app, but believe me, it’s quite powerful and has all the necessary tools. The developer claims that you can import PSD projects — files well above 100MB– and still continue editing photos on your Chromebook seamlessly. 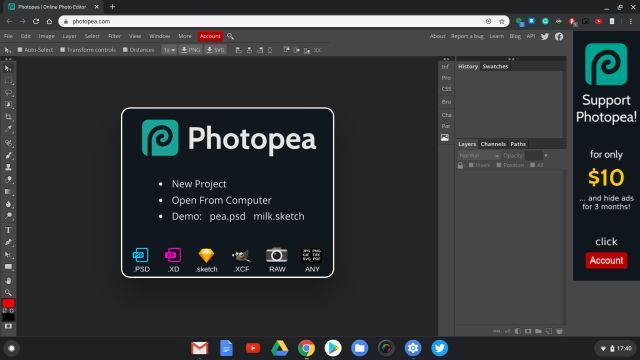 It supports many of the vector techniques and libraries natively available on Adobe Photoshop. But that is not all. Photopea is completely free and you can continue editing photos without any time restrictions. All in all, my go-to choice for editing photos on Chromebook is Photopea because it just works and without any nagging issue. Also, for users who don’t have Linux support on their Chromebook, this web app can be a godsend.

Pixlr has been a recommended photo editor for a long time on Chromebooks, however, it begs repetition again. Recently, Pixlr released a new interface for its photo editor which has layer support, tools like lasso, clone, marquee, and a lot more. Unlike earlier, where you could just change the color effects, crop image, etc. now you have a full suite of image editing tools. And the best part is that it’s not cluttered with advanced features, instead, it still wants to be a simple photo-editing platform for general users. So, if you are someone, who wants a user-friendly app that allows you to enhance, manipulate and also create images then Pixlr is the best photo editor you can go for. Also, there is a beta version of Pixlr which has slightly more advanced features so you can check that too. 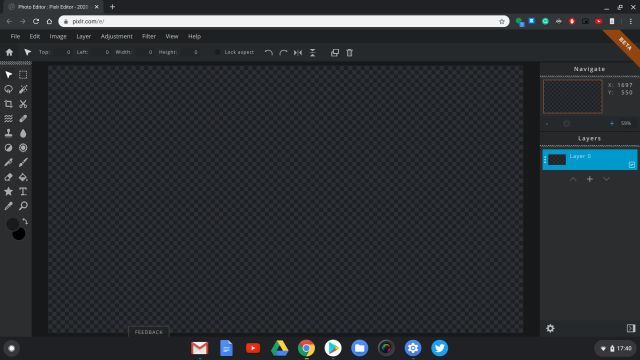 Check Out Pixlr (Free, In Beta)

Polarr is another recommended app for photo editing on Chromebook due to its great number of filters and image effects. However, I recommend it mainly because Polarr offers an offline app and you can use it without requiring the internet at all. Having said that, keep in mind Polarr does not allow you to select canvas resolution and create images from the scratch instead, it’s merely a photo manipulation program. So, if you want to adjust image composition, apply filters, mask images, superimpose multiple images and adjust gradients then Polarr is truly a great app at your disposal. Not to mention, the UI is pretty slick and modern which should help you while editing images on the go. 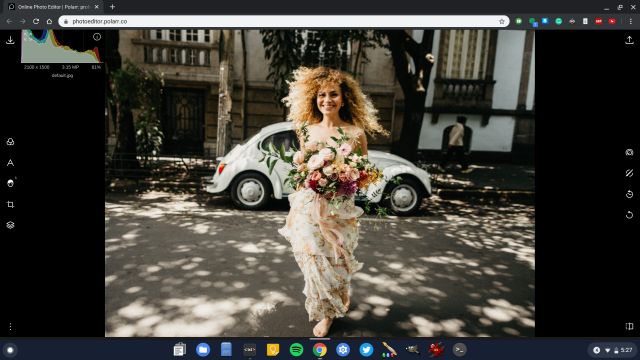 Canva is one of my favorite photo editors that I regularly use on my Chromebook. The reason is its direct approach without cramming the image editor with countless features. You want to create a collage? Just drag your images and you are done. You want to make a banner? Just choose a background template from its library and typography and you are done. No need to install a font and ensure its compatibility. Everything is available and right there. All these ready-made templates and library of impressive artwork, graphics, and icon packs make it one of the best photo editors in this list. So, if you need a photo editor for creating collages, flyers, posters, and logo, then look no further than Canva. 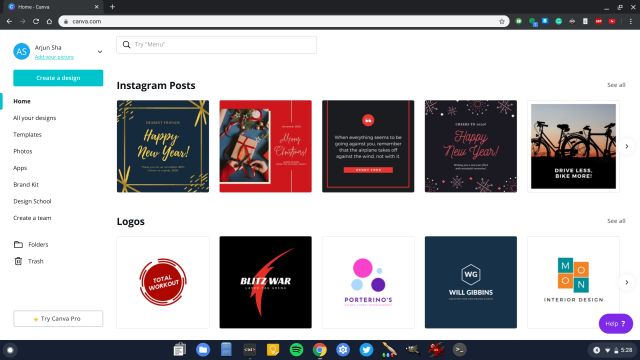 For Adobe users out there, no other program or tool suffices their specific need and we understand that. So, if you want to use the popular image manipulation program on your Chromebook then Play Store has the answer for you. With the support of Android apps, now you can install and use Adobe Lightroom on your Chromebook seamlessly. It is packed with almost all the desktop-level features and brings a series of new enhancements especially for Chromebooks. 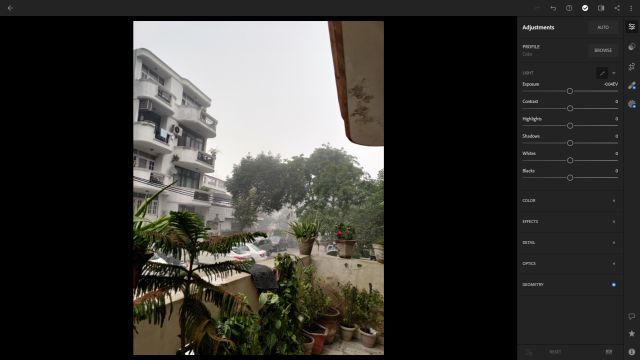 First of all, unlike other Android photo editing apps, Adobe Lightroom installs and runs perfectly fine– irrespective of whether your Chromebook has an Intel or ARM chip. So the performance is really good and does not startle at all. Next, this Android version of Adobe Lightroom supports mouse, keyboard and touch screen as well. So, you can edit images as you prefer and with much better clarity. So, if you want the best photo editor for image enhancement on Chromebook then just go with Adobe Lightroom and be done with it.

Snapseed is an immensely popular photo editing app on Android, second only to Adobe Lightroom. For many who are not proficient with Adobe suite of apps, including me, Snapseed is a much better alternative for photo enhancements on Chromebooks. It’s very similar to Adobe Lightroom in a sense, but more simplified and packs some really cool features. For instance, you have the Healing tool which can remove objects from pictures using Google’s smart techniques. There is also the Perspective tool for recreating scenes based on the adjacent atmosphere. Besides these, you get all the basic features like HDR, Exposure mapping, color composition for tuning an image and more. And the best part is that it also supports the RAW file format. So, in case you want to edit heavy RAW images on your Chromebook, Snapseed will be of great help. 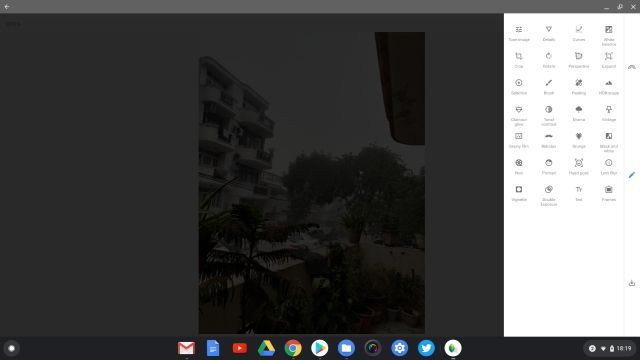 Gravit does not fall exactly on the lines of photo editing, but it allows you to create images from scratch. In essence, it’s an alternative of Adobe Illustrator which is for creating vectors graphics right from the very foundation. Here, you can create objects, define them using many design elements, create logos, posters, etc. Among other things, it also allows you to design graphics illustrations, create web and app UI, banners for social media and much more. It’s clear that Gravit is a professional-grade program for graphics editing and if you were looking for such a program on Chrome OS then this is the perfect pick for you. In fact, I would say it’s better than installing Inkscape through Linux on Chromebook. Do give it a try and see if it works for you. 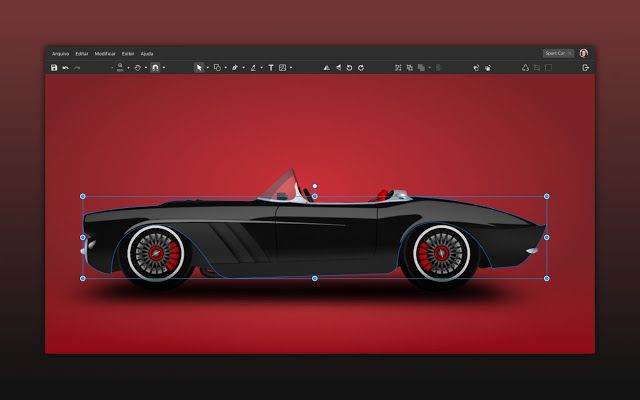 Krita is another professional-grade photo and graphics editing program which is completely free and open-source. You can install it on your Chromebook through the Linux container. The reason I am mentioning this Linux program is that it has multiple use-cases for different users. For example, you can use it for painting and conceptual art as well. Next, you can create illustrations and comics using this powerful software. In fact, Krita is a very popular app in the Linux community and many professionals use it for digital painting. So, if you ever go beyond photo editing and want to create graphic art on your Chromebook then Krita will take you right home. In my testing, it performed perfectly well and without any hiccups. 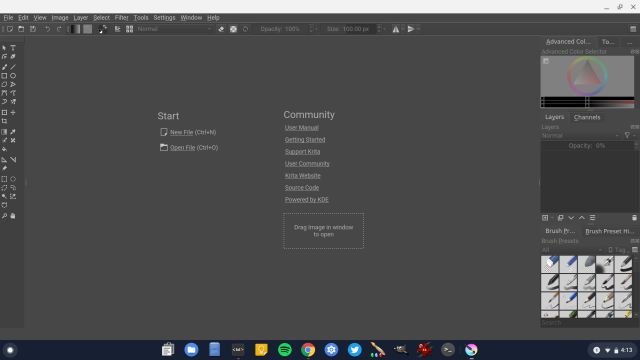 While Kolourpaint is surely not a photo editor, it’s nonetheless a crucial utility for users who are still old school at image manipulation. Case in point: I love using MS Paint on Windows because it allows me to resize and crop images, move parts of images, increase the canvas size, annotate, and much more, without going mad crazy about various toolbar options. It’s just simple and works. Since I moved to Chromebook, Kolourpaint has become perfect replacement for Paint, and you should definitely give it a try. 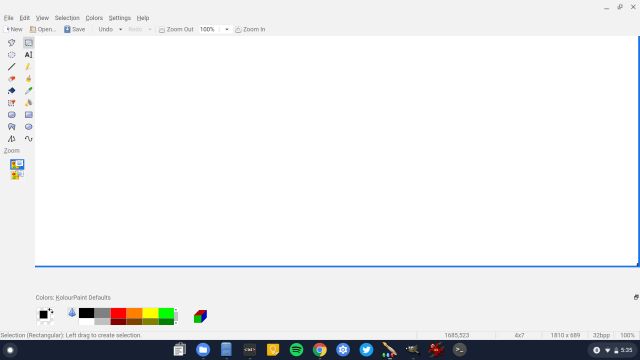 It’s a Linux app and performs exceptionally well no matter which file format you throw at it. You get all the features of MS Paint and on top of that, there are some cool new features like Automatic Crop by Windows Size, ability to skew images, monochrome effect and more. So, if you want to edit your photos similar to MS paint then Kolourpaint is an outright pick for Chromebooks. Also, it’s miles better than the SumoPaint web app that is usually recommended as an alternative to MS Paint. I would say, if you want an offline photo editor for Chromebook, do not miss this app.

So that was our list of the 10 best photo editors for Chromebook in 2020. We have tried to included as many as offline photo editors so you can continue image editing without requiring internet access. Besides that, we have also mentioned a few web apps which have improved significantly since last year. So, based on your preference, go ahead and pick any of the programs from the above list and you are not going to be disappointed for sure. Anyway, that is all from us. If you found our list of apps helpful, do comment down below and let us know.