Skip to content
Home Internet What Is Koo App? Everything You Need to Know About the Viral Twitter Alternative

If there’s one pattern that we’ve witnessed over the past year in India, it’s users migrating from one app to the other. It all began when the Indian government banned TikTok, which led to exponential growth and adoption of TikTok-like apps. Then came WhatsApp’s privacy policy update that made users switch from WhatsApp to secure messaging apps like Telegram and Signal. If you’ve been keeping up with the latest tech trends, you might have already heard of a new Twitter-like app named ‘Koo’. Today, we’ll be taking a look at what Koo offers and discussing if you should try the platform.

Everything You Need to Know About Koo App

Koo is a micro-blogging platform that focuses on India, with a vernacular push. As the company puts it, Koo is the ‘voice of India in Indian Languages.’ You can use Koo on Android, iOS, and the web. The standout feature of Koo at the moment is support for Indian languages. As of this writing, Koo is available in English, Hindi, Kannada, Tamil, Telugu, and Marathi, with support for other languages slated to come soon. Moreover, Koo is one of the winners of the Aatmanirbhar Bharat Innovate Challenge that urged Indian developers and companies to build apps that would help fill the gap of banned Chinese apps.

If you’re a Twitter user, it’s safe to say that you’ll find almost all the features here. You can use your phone number or email address to sign up for Koo. Once you’ve created the account, you can voice your opinions, follow people, send messages, and browse trending hashtags.

On Koo’s home page, you can browse your content feed from the ‘Feed’ section and discover new accounts on the ‘People’ section. The People section has a bunch of filters to help you find accounts that might meet your interests. 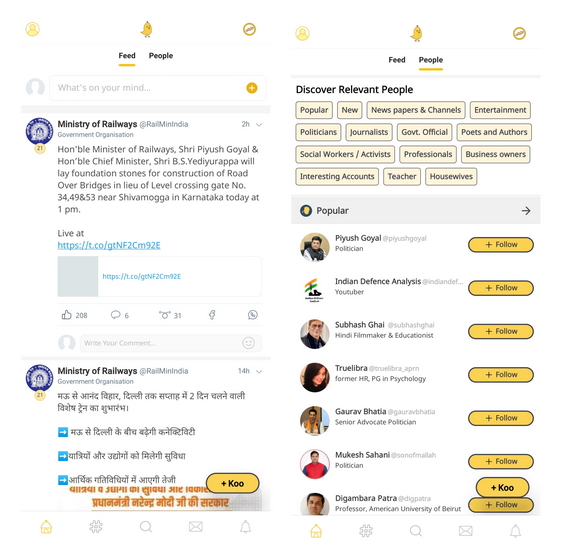 Unlike Twitter that has a 280-character limit, Koo lets you post with up to 400 characters. However, there is no option to continue your post as a thread without leaving the compose interface. As a result, you don’t get a tweetstorm-like experience here. To create a new Koo, tap on the floating action button or use the box on the home page. 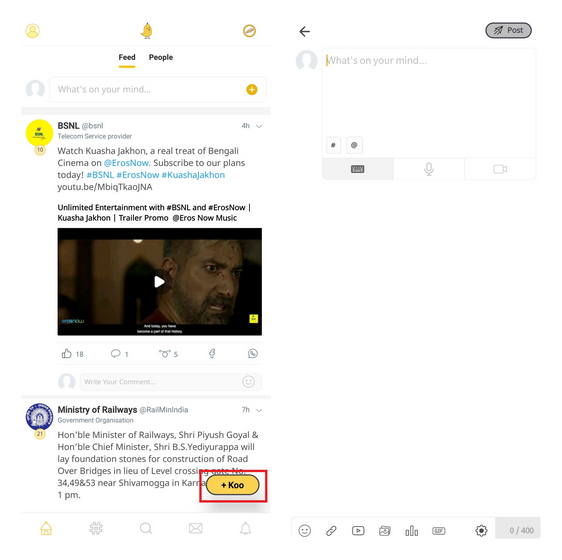 You have a retweet-like functionality too, which Koo calls ‘re-koo.’ You can directly re-koo or re-koo with a comment. That said, it doesn’t seem like there’s an option to view all the quoted replies at this moment. It could get added in upcoming updates though. 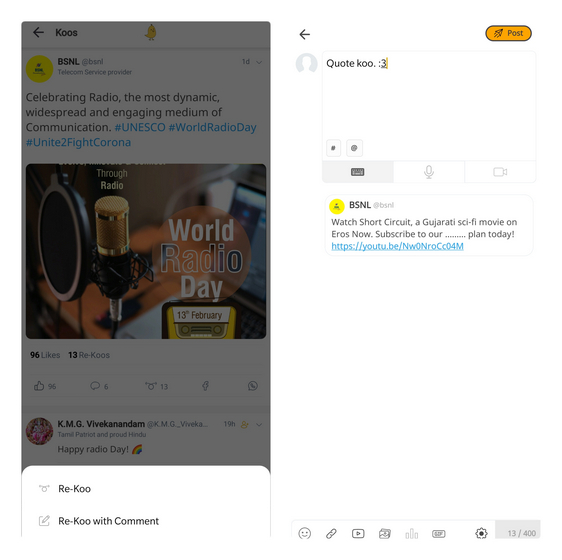 Koo has also packed the ability to share audio and videos through the app. Both audio and video posts can have a maximum duration of 1 minute. You can access both of these features from the compose interface. 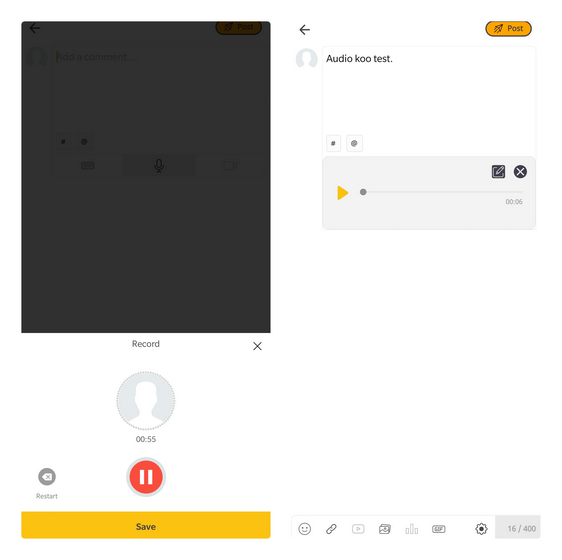 Here’s how your audio koo will look like after you record and post it to your profile:

One key differentiating feature in Koo is that you can edit koos. However, there’s a catch. You can’t edit your koo if it has received a like, comment, or re-koo (read: retweet). To edit koos before someone likes or re-koos, you can tap on the top-right corner of the koo and choose ‘Edit Koo.’ The edited koo preserves the original timestamp and there’s no visual indication to identify an edited post. 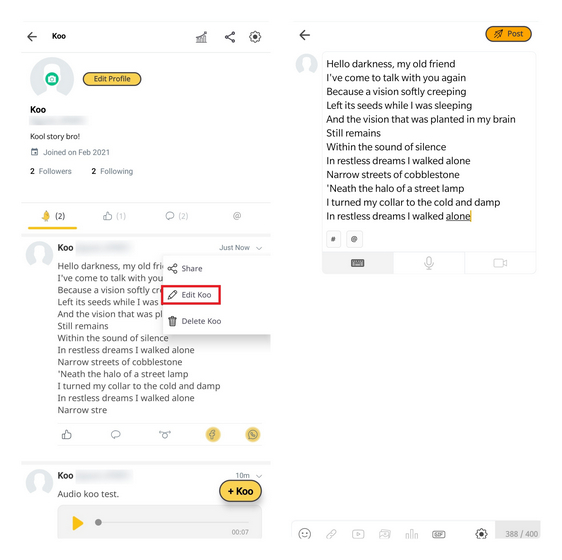 When you try editing a koo that has already received a like, comment, or re-koo, you’ll see an error message that encourages you to delete the old koo and re-post it. It goes without saying that you’ll lose all the existing likes and engagement when you delete the old post. Oh, and you can’t like your own koo.

From Koo’s profile settings, you can set your name, username, bio, and other details shown in the image below. You also have the option to link your other social links including Facebook, Twitter, LinkedIn, and YouTube. There’s a toggle to show or hide your phone number, gender, and marital status in your profile. 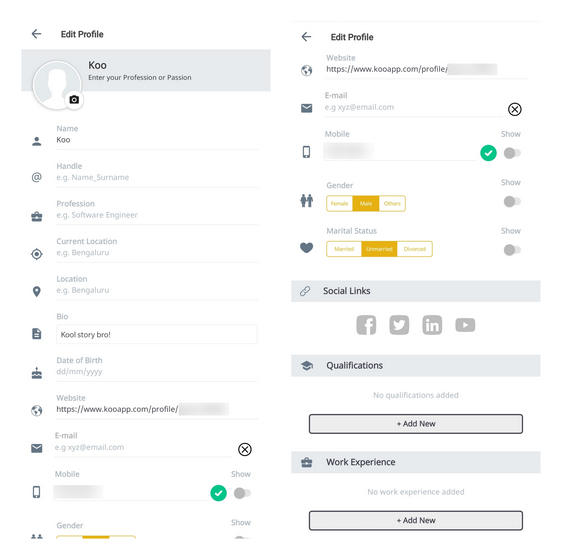 Long answer: It’s complicated. The features and the essence of the platform stays true to what Twitter offers. In fact, apart from the presence of Indian languages and editing posts, you don’t have anything that’s truly a new feature. That said, we can’t accuse that Koo is just a Twitter rip-off because of a few reasons. Firstly, Koo is still somewhat new to the game and like any startup, it needs time to build features. While the platform has caught up with Twitter by adding common features that users know and love, we’ll have to wait to see if Koo will bring new unique features.

Coming to the content and political ideologies around the platform, many argue that Koo is essentially an Indian version of alt-tech social media platform Parler. Having used Koo for the past few days, I can’t entirely deny that accusation. Although Koo’s CEO Aprameya Radhakrishna says it is an open platform, it remains to be seen if steps are taken to make Koo a true alternative to Twitter in India. If the platform doesn’t get adoption from people regardless of the ideology they support or believe in, it is bound to become an echo chamber. And going by history, that usually doesn’t have a good ending.

You might have read headlines with allegations questioning if Koo is a Chinese app and data leaking concerns. Let’s start with the first claim. Koo is the product of Bombinate Technologies Private Limited. Apart from Koo, Bombinate Technologies has another service called ‘Vokal’. While Shunwei Capital – a Chinese investor had invested in Vokal, Koo’s CEO revealed last week that the investor will be entirely exiting.

Coming to the data leak, according to French security researcher Robert Baptiste, better known as Elliot Alderson, Koo has been leaking the email address, date of birth, marital status, and gender of users at least until the 11th of February. Although Radhakrishna initially downplayed the risk, the company has since fixed the security flaws.

Should I use Koo?

Use it if you:

Don’t use it if you:

So, those are the features you get if you use Koo. We hope this helps you decide if you want to try Koo out. In fact, Koo is not the first platform that aimed to be an Indian Twitter alternative. In November last year, an app called Tooter was in the news for claiming to do just that. However, that didn’t seem to succeed and we’re barely hearing about it now. It’ll be interesting to see if Koo manages to stand the test of time after the hype settles. If you have already tried Koo, let us know your experience in the comments section.