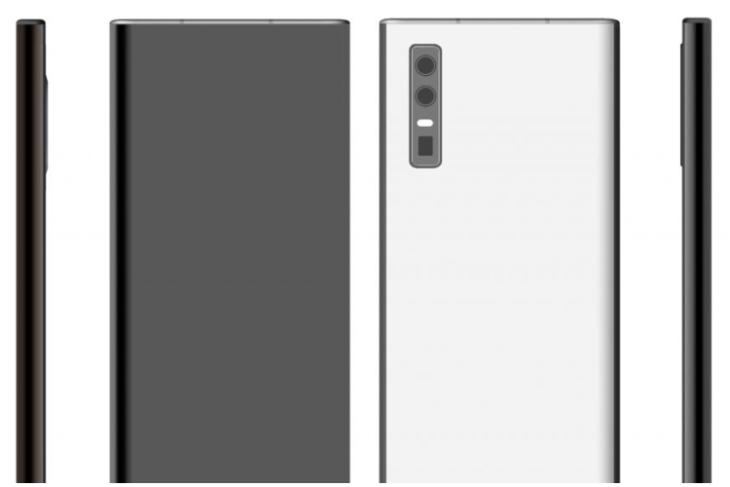 Despite the denial of Google services and the ban extending to 2021, Huawei is not stopping to innovate their smartphones. We saw the Chinese tech giant file patents for a slide-out display smartphone earlier this year. Now, the company is trying to bring the first smartphones with under-display selfie cameras.

The new patents by Huawei Technologies originally filed back in 2019, were approved recently by the CNIPA (China National Intellectual Property Administration). The patents include two identical smartphones with different camera modules at the back and a totally bezel-less display in the front.

No Bezels, No Buttons, Camera Under the Screen

Now, the smartphone in patent #1 (image below) shows a bezel-less display in the front. It has a waterfall design that curves the display panel on both sides of the smartphone. There is no sign of any buttons at the sides, which suggests that the company will implement slide or touch gestures for volume controls. At the back, there is a rectangular camera module with, what looks like a triple-camera setup with a flash. One of these lenses looks like the periscope lens of the P40 Pro.

In patent #2 (image below), the smartphone is pretty much the same as the previous smartphone. The only difference is the camera module at the back. This one features a circular camera module with a quad-camera setup. However, in this smartphone, the periscope lens is missing and also there is no sign of the flash, which is weird.

Now, one key observation in both the smartphones reveals that there are no notches or cut-outs for the selfie camera. The display appears to be entirely bezel-less. There isn’t even a provision for a pop-up camera. So, these lead us to believe that the company is trying to implement the under-screen camera tech for their upcoming devices.

We have seen the first-gen under-screen selfie camera when Oppo showed it off back in 2019. Since then, companies like OnePlus and Xiaomi have been trying their hands on the tech with the aim of bringing the first smartphone with an under-display camera by the end of 2020.

Now, we just have to wait and watch which company among these come up with the first smartphone with an under-display camera.