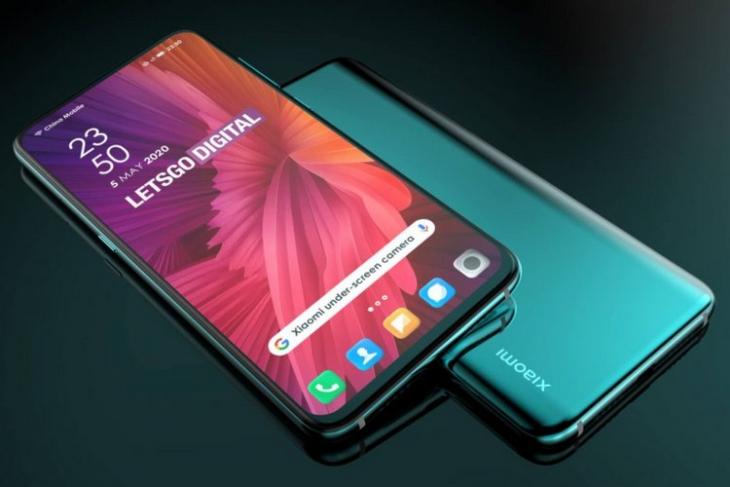 Chinese smartphone giants Oppo and Xiaomi teased their under-display camera smartphone prototypes last year. But we haven’t heard about any new developments ever since. Now, a new patent that got filed in April last year and approved this April has been spotted by LetsGoDigital and got envisioned in concept renders by Jermaine Smit, better known as ConceptCreator.

The concept renders show off a smartphone with flat edges, unlike the curved edges or waterfall displays seen on modern smartphones. As pointed out by LetsGoDigital, the design resembles the Xiaomi Mi 9 rather than the Mi 10.

Xiaomi could either be placing the under-display camera at the top center of the phone or to the top left of the phone. Take a look at the image below for a better understanding of the camera’s positioning in the patent.

One interesting aspect of this implementation is that the screen over the camera portion turns transparent when the selfie camera is in use. Otherwise, it will be like a part of the display. This way, users can enjoy an unobtrusive viewing experience, similar to smartphones with pop-up cameras.

As per the patent filing, this under-display phone will have a vertically stacked triple rear camera system with the LED flash placed just below the camera array. The top portion of the phone accommodates the call receiver. There are physical power and volume keys on the side and speakers & USB-C port at the bottom.

With all that said, do keep in mind that this phone might not necessarily be put into production soon just because the patent got recently approved. However, Xiaomi could have made noticeable progress in the past few months in which case we could expect them to show-off such products in the months to come.