It’s no secret that the late Steve Jobs loved music, that’s why music has a special place in Apple’s ecosystem. Garageband, iTunes, Apple Music, and Music Memos are just a few examples of Apple’s love for music. There was a time when Apple collaborated with famous musicians like Sting, John Legend, Sarah McLachlan, Norah Jones, Rush, and Sara Bareilles to create tutorials in Garageband on how to play their songs. Too bad they discontinued the effort.

So it’s not a strange thing to find so many music-making apps in iTunes App Store – both free and paid. If you like music and want to try making some but not ready to spend any dime on the apps, below is the list of free music making apps that you can try on your iPhone or iPad.

All In One: Garageband

We can’t talk about music making in iOS without including Apple’s own Garageband. It’s all in one app to create music. It has smart digital musical instruments, sound effects, loops, multi-track mixer, and recording studio. You can plug and play real musical instruments such as guitar and bass on your iOS device, then add stompbox effects to your playing. 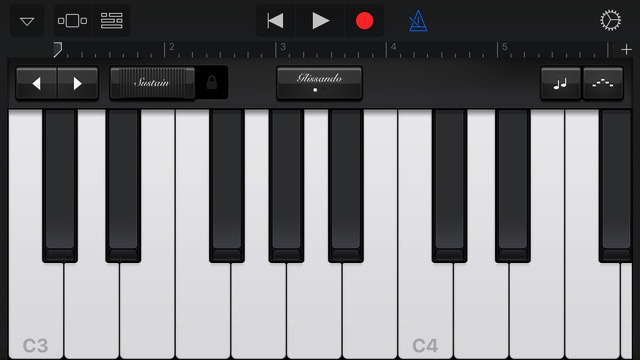 Discussing Garageband would take a lot more than few paragraphs. But the bottom line is: Garageband can do virtually almost anything that a real-life traditional recording studio could do, and more, minus the real-life part of it. 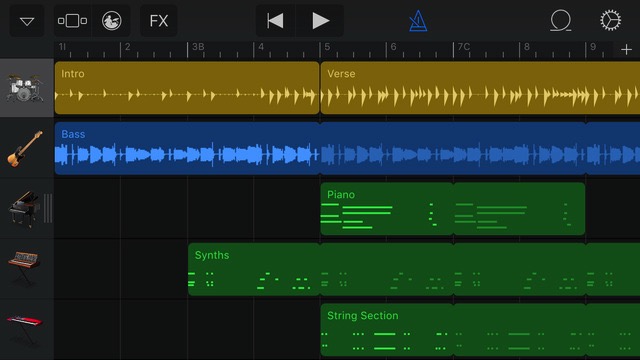 Garageband is listed as US$ 4.99 in the app store, but it’s free for every new purchase of iOS device. So I guess it could be counted as free, couldn’t it?

Sometimes you don’t need a complete recording studio. You just need one musical instrument, most of the time it’s the one that you also play in the real world or the ones that you want to learn. There are tons of single instrument apps on the app store. There are even “bands” created around these apps. Here are examples of the apps.

Among many piano apps available, let’s pick three of them. The first one is Magic Piano by Smule. The app is more of music game than a piano. It will let you play to your favorite songs by your favorite singers. You can also connect with other Smule music apps and collaborate. 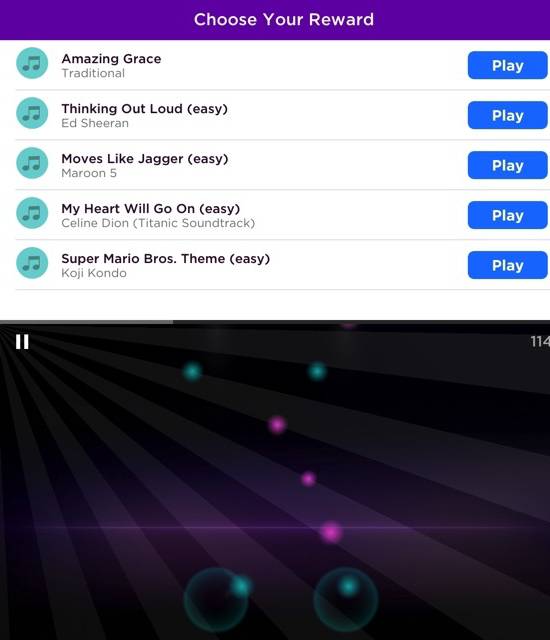 The second is Simply Piano. This one will help you learn to play Piano. It starts by asking your competency. Then you can go through the lesson while the app gives you guidance, listen to your playing, and give you feedback. If you have been postponing your piano lesson, now is the time to start learning. 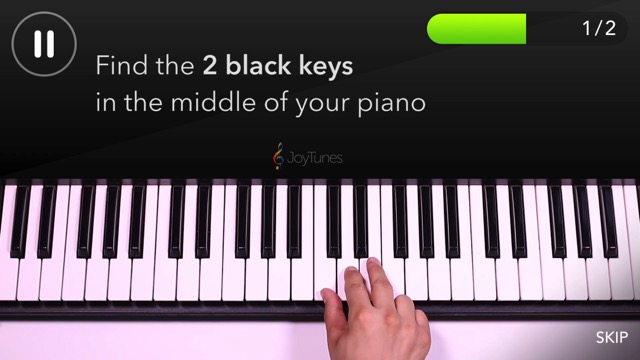 The next one is Real Piano Free. As the name suggest, this app will give you the look and the sound of a real grand piano. You can play the app as if you are playing the real instrument. You can choose to play the single or dual keyboard. But even with iPhone 6s Plus size, you would find that iPad screen is the better size to play this app. 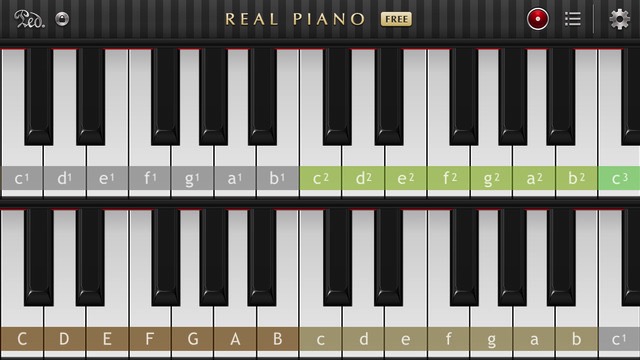 Can you play wind instrument with your iOS device? It turns out that you can. Several apps make use of the microphone to detect blowing sound and produce wind instrument sound accordingly.

One popular example of an app that falls into this category is Ocarina. There are several versions of Ocarina app in iTunes app store, but the free versions are Ocarina Free With Songs and Honey Ocarina. The real Ocarina uses the combination of four holes to produce musical notes and the iPhone versions try to keep the experience as close as possible to the real ones. Those who never play Ocarina will need some getting use to, but the instrument is fairly easy to play. 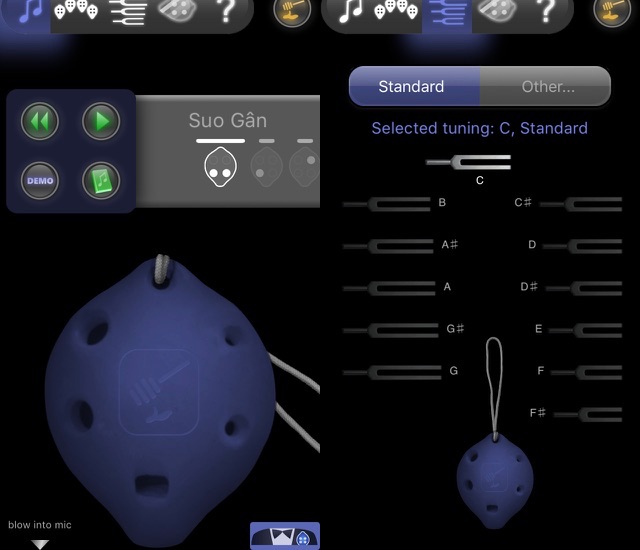 Another wind instrument that you can try is Zampona.

If you are game for another music game from Smule, you could try Guitar!. This app uses similar method of playing to Magic Piano, but with guitar sound. You can also access several types of guitar and a wealth collection of songs by earning points for your playing. 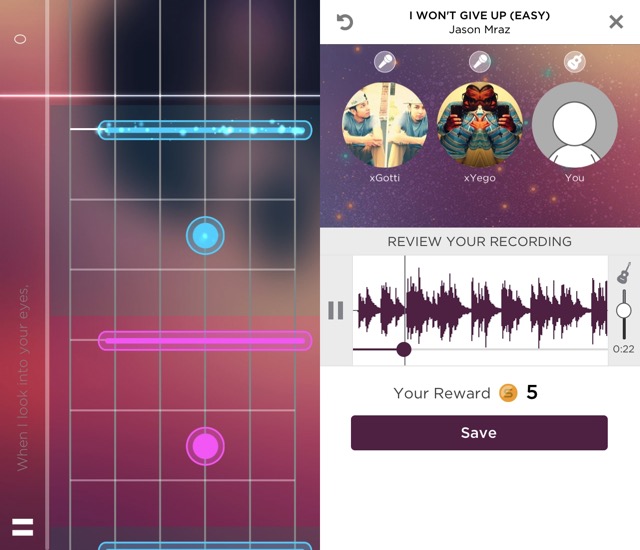 But if you want to play your device like a real guitar, look no further than Real Guitar Free. The notes that it produces are sampled from real live guitars so you can be sure of the quality. Tha app also comes with a huge database of chords with tabs and chord finder, and song book. It supports MIDI out and audiobus/inter-app audio so you can stream your playing to Garageband. 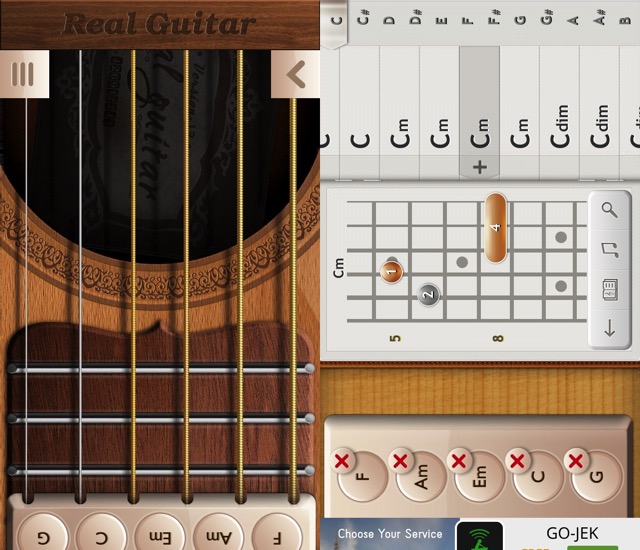 There are a lot of drum apps out there, but the recommended ones are Drum Kit and the successor Drum Kit 2. The first one is featured in Apple’s iPod Touch billboard and TV ads and also used in Ke$ha video, Die Young. The developer claims that these apps give the fastest response and are also the most realistic drum app in iTunes app store. 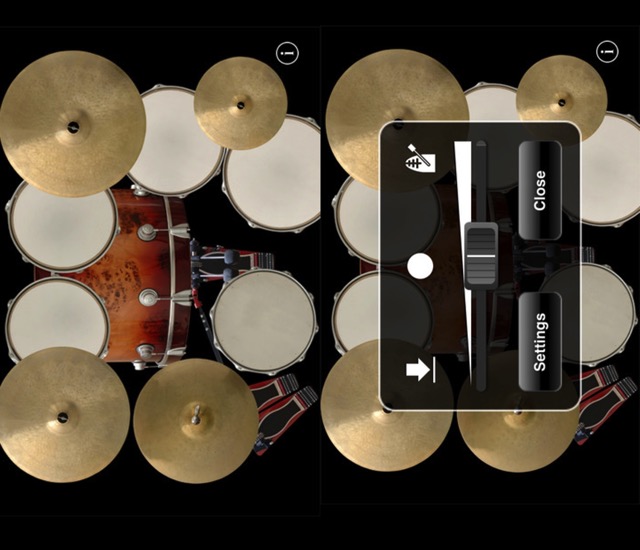 Other than the ability to add layers of drums in your recording, you can also play along to tons of MIDI version of popular songs. You can also share your songs via Soundcloud, record up to 1 minute of video, and re-arrange your drum kits. The second generation adds paid subscription option to access unlimited songs.

If you are more into electronic music, mixing and jamming, there are apps for that. Here are few of them.

Creating music in Beatwave is as simple as tapping the grids to place the notes/beats. You have four tracks of grids; each can be assigned to one sound. Beatwave will play in loops; you record the song by placing the notes on each track and they will be mixed into one loop. You can create several loops and link them into a full song. 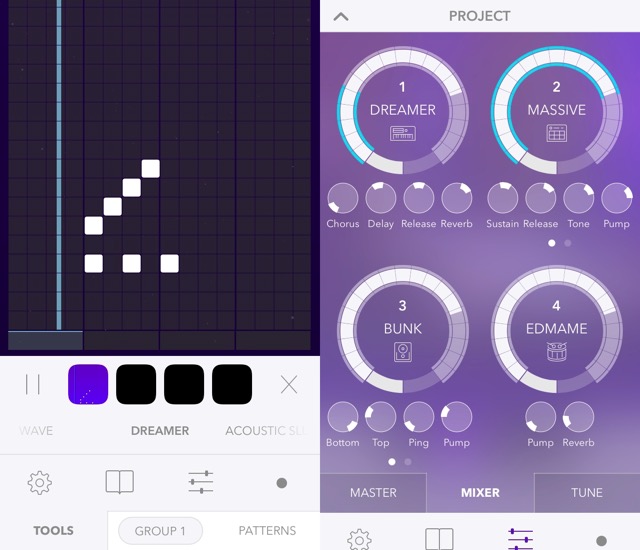 Maybe this app is best described as visual music making. They even have a dedicated graphic designer to create the experience. You won’t find a piano or other musical instrument here. You create music by drawing shapes, and you listen to your music by “watching sound” bouncing on the screen. It’s weird and fun at the same time. Try it. 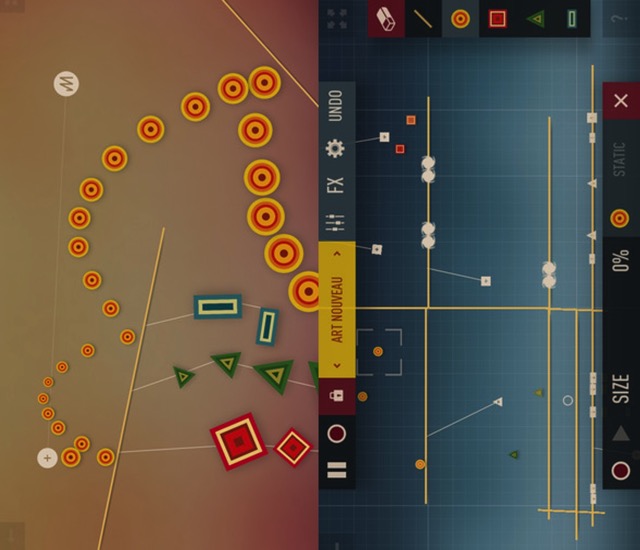 Yet another thinking-out-of-the-box concept of music making. Creating music with Ninja Jamm means mixing and jamming; by touching, tilting, shaking, and using multiple fingers; to play, cut, add effect, create glitch, mix and re-imagine. Wow, that’s a mouthful. You then can share your creation via Soundcloud to Facebook, Twitter, and Tumblr. 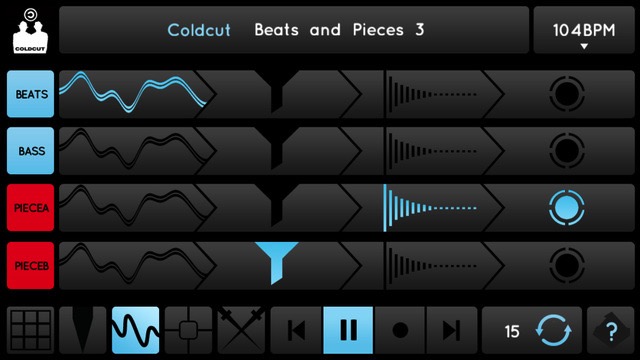 Coming from Propellerhead, one of the big names in digital music production, Figure – which once was a paid app – is built to be the quick and fun music-making app that you can use in those spare minutes you have between your activities. Other than the easy swipe and tap way to make music, you can also use Propellerhead’s musician network called Discover to find beats, back up your tracks, and share your creation with the world. 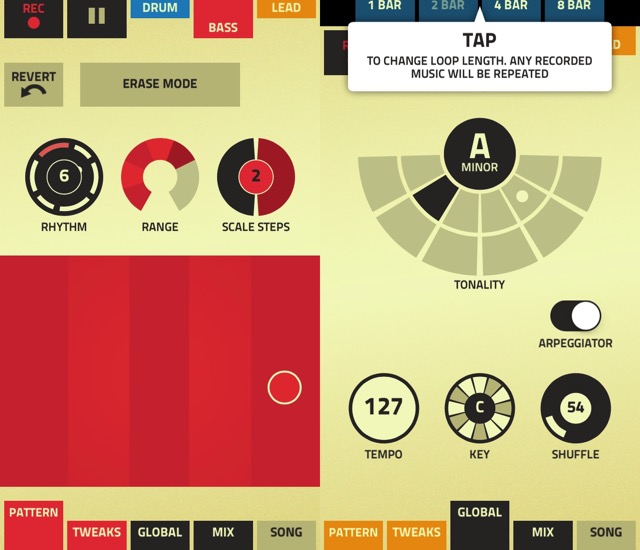 The app comes with a set of customizable pre-defined loops that already form a song. You can edit each chunk of the song, turn instruments on and off, and adjust the volume of each instrument. You can also choose a different style of music for the song, and different kind of instruments to add to each loop. You can record your voice to add to the song using the built-in or external microphone. Finally, there’s also the option to share your song with the world via its jam community. 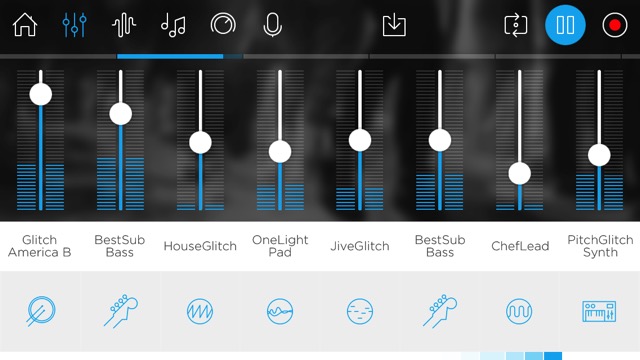 We have discussed the Android version of Music Maker Jam as part of Garageband alternatives for Android.

We, human, were born with one of the most advanced and well-built musical instrument available in the world – our vocal cord. So, we need apps that can record our beautiful voices and more.

Another fun music app from Smule. Dubbed as the global karaoke party, Sing! Karaoke is built for you who loves to sing. The selling point of the app is the chance to sing video duets of your favorite song with your favorite artist. You can also share your singing with the global community with the hope to be discovered by the talent scouts and be famous. This app is also a way to make new friends as you found your duet partners. And last but not the least, there are over 100.000 hits that you can choose. 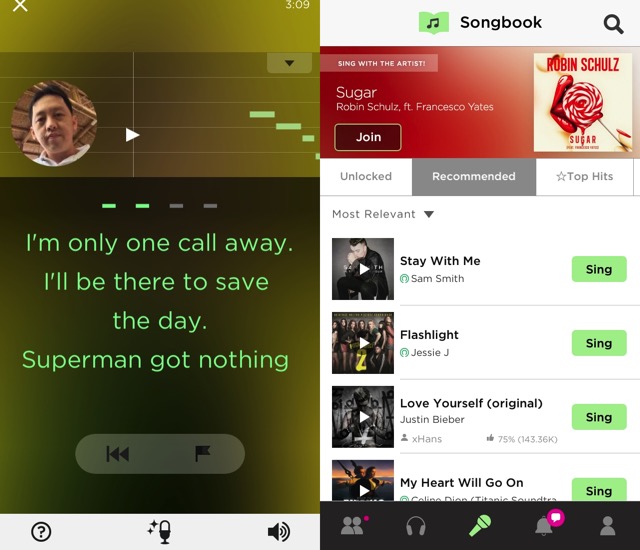 Trackd is better described as musician’s collaborative tool. You can record and mix your song using 8-track recording studio. The track can be filled with your singing, your musical instrument playing, or just another sound that you want to record. Then you can use the community of singers and musicians to find someone to jam and collaborate with to craft the perfect piece of a song. 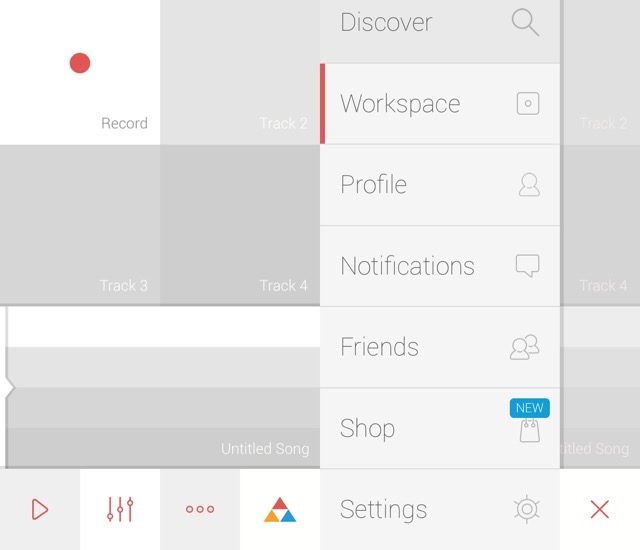 Music Memos is the app for those times when the tones hit you, and you have to save it before they’re gone. The app is designed to record bits and pieces of song ideas. But there’s more to that. The app will automatically add smart bass lines and drum beats to your recording to help you imagine what the final song would sound like. We have discussed the app before if you want to know more about it. 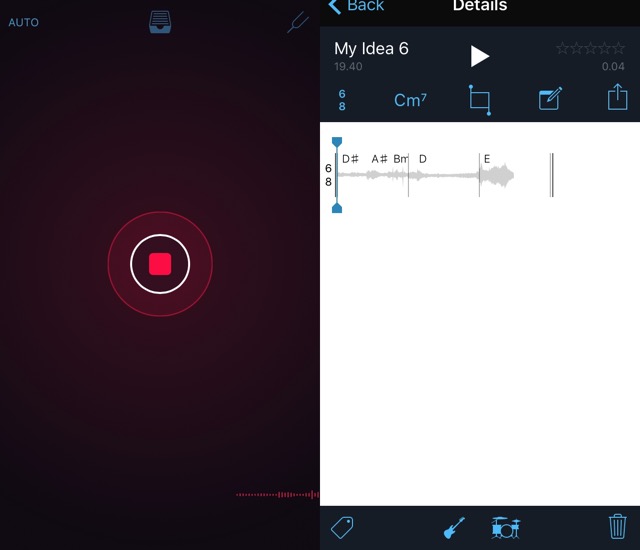 SEE ALSO: 15 Websites to Get Creative Commons Music for Free

Do you have your favorite free music making apps for iOS that are not mentioned here? Share them using the comment below.