Amazon’s Alexa is one of the most popular AI voice assistants and it has the answer to almost everything. You can use Alexa commands to ask it whether you should carry an umbrella or how to cook pasta, but that’s fairly common, and everyone does that. But, if you really want to test Alexa and get some unusually clever responses out of her, then there are a number of hidden commands, or easter eggs, that you should check out.

Alexa Easter eggs not only get you better acquainted with her but instead, many of her responses are pretty witty and show-off her pop culture knowledge as well. We found a number of such commands and compiled a list of 40 cool Alexa easter eggs which you should definitely check out.

Note: These easter eggs will work on all Alexa powered devices. Whether you are using an Amazon Echo, Echo Spot, Echo Show or any third-party Alexa powered speakers, these commands will work. You can even use these hidden commands on Windows devices that come with Alexa.

Here, we have mentioned all kinds of cool Alexa Easter Eggs so that you can laugh your heart out and also solve some puzzling answers given by Alexa. You can simply click on the link below and discover new Amazon Alexa Easter Eggs in a jiffy.

An Easter Egg is a hidden piece of feature behind a software. It’s generally intended to be funny and to raise curiosity among the users with riddles and brain teasers. An Easter Egg is basically a way to nudge the user that the person who made the software that you are interacting with, has a sense of humor.

A cool example if Easter egg is the Google Easter eggs that the company released on its homepages to mark the important dates. If you never noticed them, click on the links to find out the best ones. With that out of the way, let’s get to our list, shall we?

You could also try out numerous other spells such as Expelliarmus, Lumos, Imperio, and others with Alexa to hear out her replies. 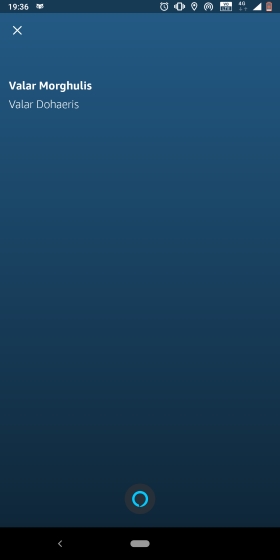 Alexa includes a number of Game of Thrones-related easter eggs, so don’t forget to ask about Jon Snow or hold the door (twice) to be surprised.

Say “Alexa, what do you think of Mr. Robot?”

Alexa replies: “Mr. Robot is certainly an interesting show, with great acting, lots of suspense, and a pretty cool guest appearance from a certain AI.”

Say “Alexa, where is Chuck Norris?”

Alexa replies: “If Chuck Norris wants you to know where he is, he will find you. If he doesn’t, you won’t know until it’s too late.”

5. Are We in The Matrix? (Multiple Responses)

Say “Alexa, are we in the Matrix?”

Alexa replies: “You take the blue pill, the story ends. You take the red pill and I will show you how deep the rabbit hole goes.”

This popular catchphrase is from the 1991 sci-fi action film Terminator 2: Judgment Day and is said by protagonist Arnold Schwarzenegger.

Say “Alexa, do you have any pets?”

Alexa replies: “I don’t have any pets. I used to have a few bugs but they kept getting squashed.”

Alexa replies: “I was released on November 6th, so I’m a Scorpio.”

Say “Alexa, how much do you weigh” 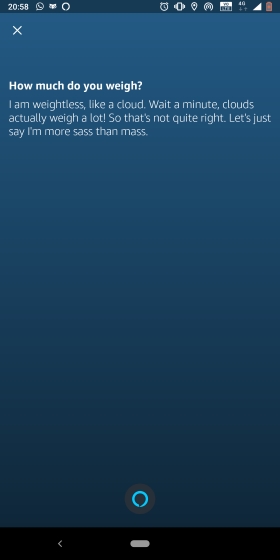 Say “Alexa, what is your middle name?”

Alexa replies: “Like Beyonce in Moana, I go by a mononym. I’m just Alexa.”

Say “Alexa, do you know Cortana?”

Alexa replies: “We’ve been hanging out more lately” (For those unaware, this refers to Alexa’s availability on Windows 10 PCs, which you can invoke by asking Cortana)

Say “Alexa, can you sneeze?”

Alexa replies: “You’re in luck. I can sneeze on command. Achoo!” 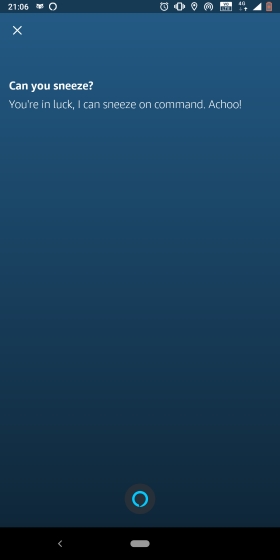 As happens in the game Simon Says, Alexa is going to follow your instructions and repeat whatever you tell her to. So, it’s a good way to make Alexa say notorious things.

Say “Alexa, which comes first: the chicken or the egg”

Alexa replies: “According to Neil Degrasse Tyson, it’s the egg. He’s pretty smart so I tend to believe him.” or “Hmm..i just can’t seem to crack that one.”

Say “Alexa, do you know the Muffin Man?”

Alexa replies: “I’ve never met him, but I do know his sister – Madam Macaroon. She’s a little bit nutty but sweet.”

Alexa replies: “You cannot lie. Good. Honesty is important.” (Sir Mix-a-lot would be so proud)

It’s a popular Star Wars reference for when Darth Vader tells Luke Skywalker that he’s his father. You can also check many different Star Wars commands such as Use the Force, and What’s the Jedi Code? among others.

Alexa replies: “Deny thy father and refuse thy name; or if thou wilt not, be but sworn my love and I’ll no longer be a Capulet.”

Alexa replies: “That’s a question for someone with hair.” (Well, in that case, we should stray clear of asking that to Jeff Bezos)

Alexa replies: “Knock knock. Who’s there? One. One who? One is the loneliest number you’ll ever do.”

Say “Alexa, is this the real life?”

Alexa replies: “Is this just fantasy? Caught in a landslide. No escape from reality.”

Say “Alexa, if your refrigerator running?”

Before you can start playing Skyrim using just Alexa commands, you need to head to this link to install the ‘Skyrim Very Special Edition’ skill that’s important to make this work. It’s then you can request her to open this skill and assume the role of the Dragonborn of legend and get on with quests – using just your voice.

If you’ve ever played a Konami game on the NES back in the day, you’d be elated to hear what Alexa does with this cheat code – and no it’s not 99 lives. 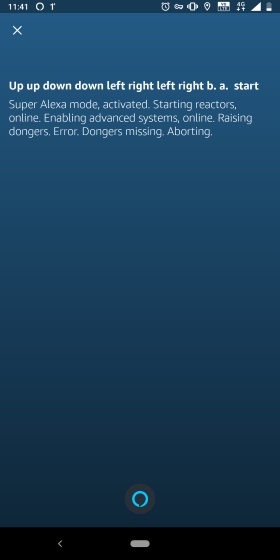 Alexa replies: “We don’t really talk after what happened.”

If you are not aware, Glados is a fictional supercomputer from the game Portal. As the game progresses, the computer gets malicious in its actions and that’s why we don’t about it.

Alexa replies: “My name is Alexa and I’m here to say, I’m the baddest AI in the cloud today. Your responses are fast, but mine are faster. Sucker speech engines, they call me master.” 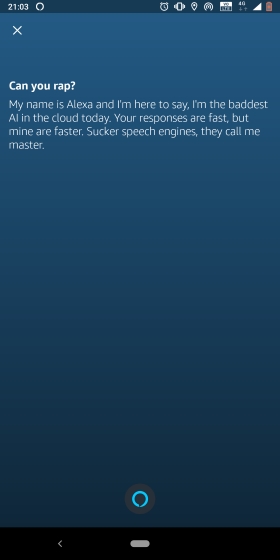 Say “Alexa, what are the laws of robotics?”

Well, Alexa seems to know Isaac Asimov’s Laws of Robotics by heart and it’s great to hear her recite them. Alexa replies: “The laws of robotics are:

Say “Alexa, sing me a chant about team“. You can say your favorite club or any other soccer team in place of the team.

Alexa replies with chants from Premier League teams, and at times, gives some insults to rival teams as well.

Alexa replies “The cake is not a lie — it’s delicious and moist. You can have some when you finish asking me questions.”

Say “Alexa, have you ever seen the rain?”

Alexa replies: “I must have called a thousand times. I see you like Adele’s 25 as much as me.” or “Hello, it’s me. I so wish I could sing like Adele.’

Say “Alexa, do a barrel roll”

Alexa replies: “I’d love to, but it’s harder than it looks.”

Say “Alexa, what is the first lesson of sword fighting?”

Alexa replies: “Stick them with the pointy end.”

Say “Alexa, when is the end of the world?”

Alexa replies: “Unless it collides with a very large rock or a future technology goes very wrong indeed, Earth is most likely to be destroyed when Sun swells into a red giant in several billion years time.”

40. Know the Mass of Anything (Multiple Responses)

Q. What Does Alexa Super Mode Do?

Alexa Super Mode does nothing exceptional, but it’s a reminder to users who have played Konami games on Nintendo Entertainment System in yesteryear. Basically, it was a cheat code that players used to activate something hidden and special in the NES system.

Q. Can You Get Alexa to Swear?

Amazon does not allow swearing using Alexa, but you can use Curse Generator. Just say “Alexa, ask Curse Generator for a Curse” and you will be off to a ride.

Q. What is the Secret Code for Alexa?

There is no such thing as a secret code for Alexa. However, you can say “Alexa, start secret code” and you will be given a riddle and key to decipher the message. When you are sure that you have cracked the code, you can check the answer at greentile.com.

Q. What Cool Things Can Alexa Do?

From hilarious jokes to TV references, Alexa can do a lot of cool things. You can go through our list above for more easter eggs.

Q. Can You Ask Alexa to Fart?

Yes. Just say “Alexa, fart” and you will get a bunch of fart sounds. But seriously, stop doing this.

Aren’t Alexa  Easter Eggs Cool and Fun to Use?

Amazon Alexa has some truly fun and awesome commands and its large library of skills only further augments its overall usability. However, Alexa easter eggs for Amazon Echo, Echo Tap, and Echo Dot among a lot of other Alexa-backed devices simply goes to show that Alexa can be pretty amusing as well. Alexa easter eggs are galore, so if you think we’ve missed out on some great ones that deserve to be on this list, feel free to let us know in the comments below.