macOS Big Sur brought along a massive UI overhaul to the Mac. It added the control center, a new notification center with redesigned widgets, and a lot more. It also introduced a new icon design for apps. That’s fine, but the problem is that a lot of developers have not updated their app icons to this new design. That means your Mac can look inconsistent and rather weird. Fortunately, there’s an easy fix. Here’s how to change all app icons to Big Sur style icons with Terminal on Mac.

How to Change App Icons to Big Sur Style Icons

There are plenty of ways to change icons on a Mac. However, for an update as huge as Big Sur, manually changing app icons can be tiresome, which is why we are showing you an easier and faster way to do this.

We will also be covering other ways to change app icons in macOS Big Sur, just in case you don’t want to use Terminal. You can use the table of contents below to skip over to the method you want to try.

This first method requires some effort on your part, but it’s completely free and it changes almost every app icon to the new design. Here’s what you need to do.

You must have NodeJS installed on your Mac. If you don’t, you can download it from this link.

Once you have it installed, just check if the installation has succeeded correctly by running the following command in the Terminal app.

The Terminal should show the version of NodeJS installed on your computer. If it doesn’t, you should install NodeJS again.

How to Change App Icons with Terminal

Now that we have the NodeJS installation out of the way, let’s start fixing the app icons.

You can repeat the sudo iconsur set [app name] Terminal command for as many apps as you like.

Note: The icons might change back after app updates. In such a case, simply run the iconsur command again.

If you don’t want to use the Terminal for some reason, or if you just need to change the icon for a single app and iconsur feels overkill, you can also change icons with Finder. Here’s how.

To use this method you will need to have the new icon that you want to set saved on your Mac somewhere. I am using the iOS app icon for Photoshop here. 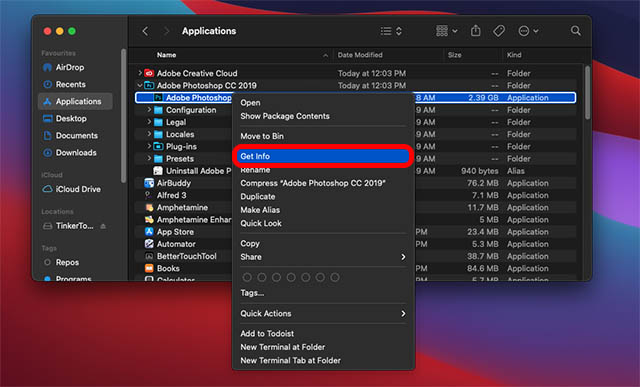 That’s it, Photoshop is now using the new app icon that I set. You can do this for pretty much any app on your Mac.

3. Use Replacicon to Change Icons

If, unlike me, you don’t like to play in the Terminal app, you should check out Replacicon. This app automatically scans all installed apps on your Mac and looks for icons for them on the web. You can then choose which icons to use for replacing your old app icons.

The app is priced at $2.99, so you will have to spend some money here. However, it takes the manual work out of the job and makes it a lot easier.

While I expect most major developers will update their Mac app icons to be in line with Apple’s new design, it could take some time. So it’s a good idea to take things into your own hands until that happens, and change your app icons yourself. This way, your Mac will look cleaner, and more consistent as well.

We have included methods for people who don’t mind using the Terminal, people who want to do the job manually, and even a paid option for those looking for a quick solution for all app icons. Hopefully this article has helped you change the icons on your Mac to the new Big Sur style icons. If you have any doubts, or if you need help, let us know in the comments and we will help you out for sure.

How to Use Announce Time in macOS Big Sur

10 Best Widgets for macOS Big Sur that You Should Use