Skip to content
Home Tech iOS AirDrop Not Working? Here Are All The Possible Fixes

Back in the day, one major complaint that existed against iOS was how the Bluetooth radio could not be used for file sharing and data transfers. Apple always cited security as the primary driver behind this decision, and later on went on to provide an alternative that afforded this freedom without compromising on user’s data security. Dubbed “AirDrop”, this feature allowed compatible iOS devices or macOS devices to share files, photos, contacts and pretty much everything else between them using a secure, encrypted protocol.

AirDrop was introduced with iOS 7 and OS X Lion, and has since seen its fair share of controversy in terms of not always working the way users expect it to. Since it relies on a low-latency, high-speed peer to peer combining the power of Bluetooth 4.0 LE radio and the on-board WiFi chip, it can be a little hard to troubleshoot AirDrop issues via traditional troubleshooting methods. Still, there’s a lot you can try before visiting the Genius bar, and if you’re facing frustrations at the hands of AirDrop on your iPhone, iPad or Mac, here’s a list of things you can attempt to potentially fix the problem:

1. Check your device’s radios and connectivity

This is probably the no-brainer step, but one that you should definitely ensure before giving in and visiting Apple. As mentioned earlier, AirDrop relies on Bluetooth and WiFi to communicate and transfer data. Therefore, on both the sending and receiving devices, ensure that both these radios are actually turned on. On iOS, you can check the status for both using the Control Center, and for macOS, the menu bar will tell you that. If either of the radios was turned off, turn it on and try AirDrop once again.

Next up is checking connectivity. The first thing you need to ensure is that Airplane Mode isn’t on. This would’ve become obvious when you looked at WiFi and Bluetooth in the Control Center, but just in case, head on to Settings in your iOS device and make sure the Airplane Mode toggle isn’t on. In case it is, flip it back to off and try again.

2. Check Do Not Disturb status

This one is a little tricky, but AirDrop will most likely fail if your device, whether iOS or macOS, is in DND mode. The way AirDrop works is that it’ll prompt a notification on the receiving device about the incoming transfer, and the recipient has to accept the transfer for AirDrop to initiate. Under DND, it’s likely that this notification will never actively arrive, causing AirDrop to fail. Therefore, you’d want to turn off Do Not Disturb mode before establishing a successful AirDrop connection. 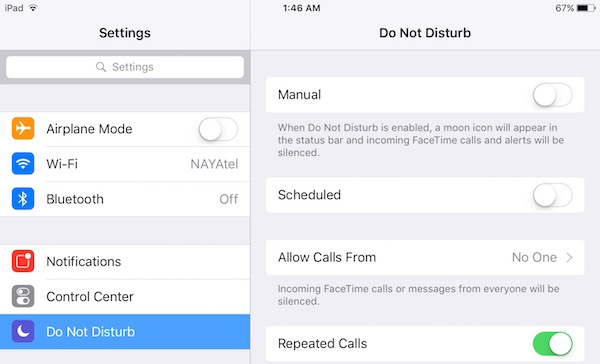 On an iOS device, this can easily be done via the Control Center, where you simply need to ensure that the moon icon (denoting DND mode) isn’t toggled on. On a Mac, you can either turn off Do Not Disturb via the Notifications Panel (if you have set that up) or through the Notifications System Preferences pane.

It’s worth remembering that if you’re using scheduled DND, AirDrop might not work during those hours.

Building on the previous troubleshooting step, it helps to ensure that the receiving iOS device’s screen is turned on. This is because, as we noted earlier, AirDrop generates an incoming transfer notification, and such notifications might not always turn on the screen, resulting in a failed connection attempt. Hence, before transferring data using AirDrop, make sure the screen is turned on for your receiving device.

It’s worth noting that this step applies specifically to iOS devices. On macOS, screen status doesn’t make a difference, as long as the system itself hasn’t entered sleep state. On macOS, incoming AirDrop requests will generate notifications on the lock screen.

3. Is AirDrop On and Visible?

This is another interesting aspect that we sometimes tend to ignore. AirDrop comes in three states that offer different levels of visibility:

As you might have guessed, you need to check these settings on your receiving device as a priority, and preferably set them to Everyone to ensure smooth connectivity. On an iOS device, this can be done via the Control Center using the AirDrop option and selecting Everyone.

On a Mac, go to the Finder and from the left sidebar, hit AirDrop. At the bottom of the panel, click Allow me to be discovered by: and select Everyone from the dropdown menu. 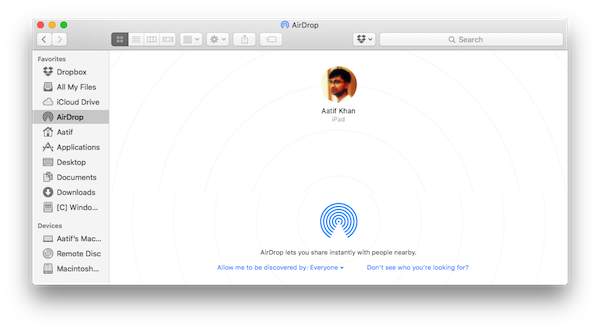 For Macs, it’s also important that you’re actually in the AirDrop option in Finder for your device to show up in the sender’s list. A lot of times people get frustrated because they were in some other area on their Mac, whereas AirDrop has to be the active location in Finder for AirDrop to work.

AirDrop’s effective range of operation is 30ft, since it relies on Bluetooth and WiFi for connectivity. Therefore, if the distance between your devices is more than this, try bringing them closer. It’s also worth pointing out that this 30ft ideal distance should be taken with a grain of salt, because in real-world scenarios, electromagnetic fields, walls and physical objects, and other electronic devices can interfere and reduce this distance to something much lesser. Bottomline: just try bringing your devices closer.

This is another tip that applies specifically to the iOS part of the AirDrop mechanics. Personal Hotspot on an iPhone has been known to interfere with AirDrop, perhaps because it engages the WiFi radio. It would be even more troublesome if you enabled Bluetooth tethering as well. Hence, it helps if you turn off Personal Hotspot on the iOS device, before attempting AirDrop. To do so, head over to Settings on your iPhone and toggle the Personal Hotspot switch to Off.

iOS’s implementation of AirDrop is a little different from that of macOS. On an iPhone, when you receive a file via AirDrop, the expected behavior of the OS is to open it in an appropriate app (hence receiving a photo will open it in the native Photos app). This prevents an iPhone or iPad to receive an AirDrop that has multiple file types, resulting in failure. You’d be greeted by a message in such cases that says, “Cannot receive all of these items at the same time.”

Fixing this is as simple as ensuring that only ONE file type is being sent in one AirDrop session. That means you can send and receive multiple files as long as they are all, say, photos, or all PDFs, or all MP3s and so on. This is different from how macOS works, where you can receive as many files of as many types as you want, but if you have faced the above error on an iPhone, here’s the fix.

7. AirDropping to a Legacy Mac

AirDrop supports a number of older devices, even if they employ a different Bluetooth version. To get around this hindrance, Apple implemented two different AirDrop protocols: one that works with newer Bluetooth 4.0 Macs and the other for older Macs (specifically, 2012 models and older). This change in protocol doesn’t happen automatically, and so if you’re trying to send something to a 2012 or older Mac, you’ll have to manually switch to the older protocol.

To do so, in the AirDrop section of the Finder, click the blue link that says, “Don’t see who you’re looking for?” and click the Search for an Older Mac button. Your recipient will now show up in this list.

macOS comes with a native Firewall that, if enabled, can break AirDrop. If you are working with a shared computer, it might be turned on without your knowledge, where you’ll have to turn it back off to re-enable AirDrop.

To do so, head over to System Preferences, then Security & Privacy and then the Firewall tab. Under Firewall Options, uncheck “Block all incoming connections” to restore AirDrop. It’s worth noting that you’ll need administrator privileges to make this change. 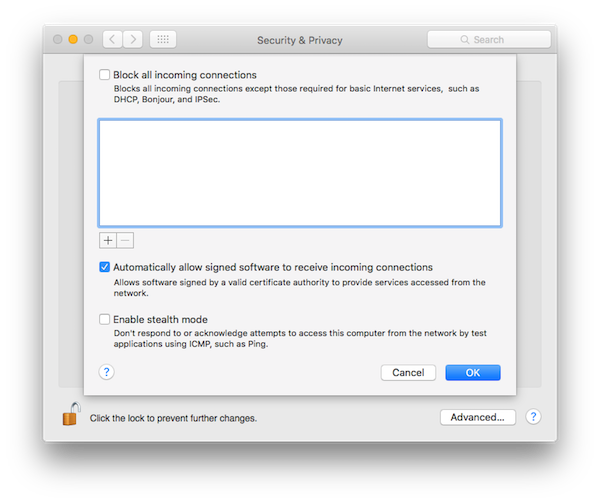 It might seem strange, but there is a chance that your Mac or iOS device has a special character in their network name that’s breaking AirDrop. In general, it’s a good practice to use standard alphanumeric characters when naming your devices.

To check this on a Mac, head on to System Preferences->Sharing and then Computer Name on your Mac. On iPhone, Settings > About > Name is the path to look at.

If all of the above still didn’t solve your problem, there are some general fixes that you can try which aren’t specific to AirDrop but help with connectivity anyway:

SEE ALSO: How to Fix iPhone Apps Stuck on Downloading

Fix AirDrop Problems on Your Mac and iOS Device

AirDrop is something that we use a lot, as it’s a great way to share files among different Apple devices. Well, these tips should solve your AirDrop issues in most situations. If they still don’t help, perhaps it’s time to make a visit to the Genius bar and get the problem sorted out. If we missed something, drop us a comment below and let us know. Thanks for reading!

How to Fix Touchscreen Problems on Android