With iOS 14, apps must come clear about their stand on privacy in plain language. Apple has categorically likened the new iOS app privacy policy to nutrition labels on food, emphasizing that developers need to explain the three most pivotal aspects: data used to track you, data linked to you, and data not linked to you. From what I can derive from the iOS app privacy policy, it’s going to make a user more informed about what data an app collects and how it uses personal data for tracking. Moreover, you can check iOS app privacy details for iPhone and iPad not only in the App Store but also on the web before downloading an app on your device. Here is how to get started.

In the wake of blatant privacy breaches where a number of apps have been caught abusing personal information in the veil of delivering a tailormade personalized experience, Apple has put privacy on the forefront. Whether it’s tracking you across apps and websites or linking certain data to you, an app must be transparent in dealing with you – right from the outset.

By viewing what sort of data an app collects and what it does with that, you can decide whether or not that app is worth downloading on your iPhone or iPad. To best summarize the whole situation, it’s pretty much like ordering a dish in a restaurant depending on what and how much you want to eat.

2. Find the app which privacy details you want to see and tap on it.

4. Now, tap on See Details to view the detailed privacy details of a specific app. 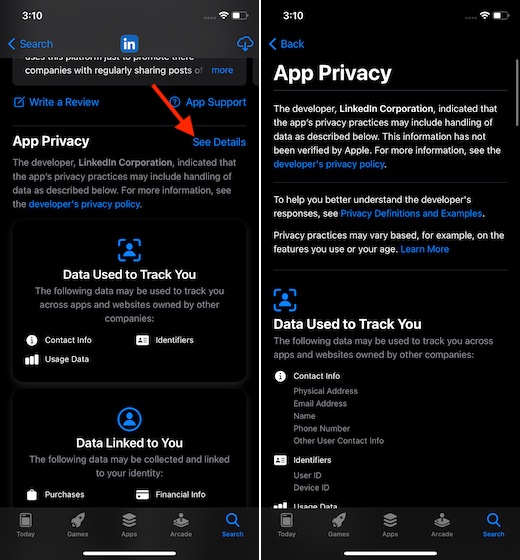 See Privacy Details of iPhone/iPad Apps on the Web

Finding the privacy details of a specific iPhone or iPad app is just as simple on the web. Open a web browser on your device. Then, type the name of the app followed by iTunes and search it. After that, scroll down to the App Privacy section to see the privacy details mentioned by the app.

Note: Giving more emphasis on privacy, Apple has created two pages explicitly outlining its stance on privacy and how its apps deal with users’ privacy. For more information, you can head over to the respective web pages.

Keep a Tab Privacy Details of Apps on iPhone and iPad

Ever since Apple made it mandatory for apps to ask for a user’s permission to track across apps and websites, a virtual war has been going on between Apple and Facebook. While the former is pressing for more transparency, the latter is stressing that the new iOS privacy policy will hurt small businesses.

You may also like to read these privacy-related iOS 14 articles:

Without taking anyone’s side, I would like to say that it’s always better to be crystal clear about the way you deal with an end-user. After all, using or abusing anyone’s personal information by keeping them in the dark hurts an end-user more than anyone else. What do you have to say about the app privacy that has been brought into practice with the introduction of iOS 14?