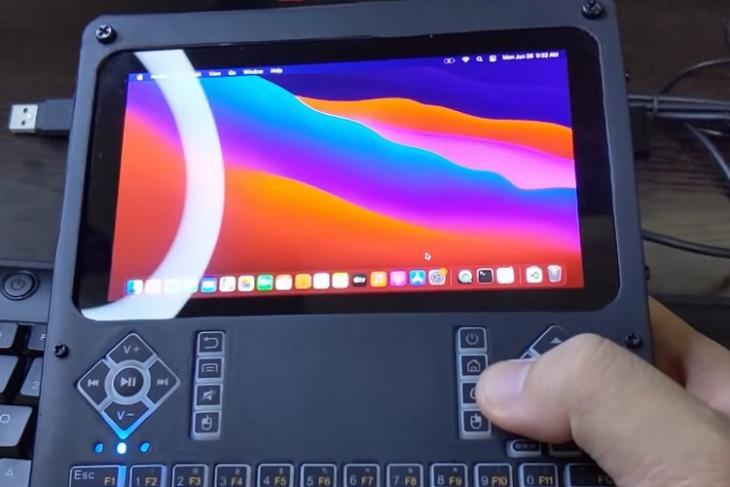 Apple, as we know, does not allow users to run macOS on non-Mac devices, at least not officially. Well, that does not stop tinkerers to boot Apple’s desktop OS on unsupported devices, thanks to the Hackintosh process. So, taking advantage of this very process, a YouTuber has built a compact handheld PC that runs Apple’s macOS Big Sur.

A DIY Handheld PC with macOS

The YouTuber named Ike T. Sanglay Jr. recently shared a video in which we can see him build a DIY handheld PC, running the macOS Big Sur. Although the device has no practical use in the real world, it is pretty cool to see a portable device run Apple’s desktop OS.

Now, coming to the technical details, Ike used a LattePanda Alpha SBC (Single Board Computer) to build the device. The LattePanda Alpha includes an Intel Core m3 CPU paired with 8GB of RAM and an Arduino Leonardo microcontroller board. The YouTuber also used a 240GB SATA SSD with macOS Big Sur pre-installed and a custom 3D-printed casing to house the components.

You can check out the 8-minute video of Ike putting all the components together right below.

Upon completion, the YouTuber finally boots the device and it seems to be working fine. However, although the interface was looking fine, the battery indicator did not work as intended.

Now, it is worth mentioning that the cost of building this DIY handheld device is more than the price of Apple’s latest M1 Mac Mini. However, that did not stop Ike to build the device from scratch as getting a Mac Mini is not as fun as building a handheld device along with a display and keyboard that can run Apple’s macOS.

Moreover, he also points out the fact that one can easily install macOS on UMPCs (ultra-mobile PCs) like on GPD devices. However, that would not be a DIY handheld, right? So, the device is a result of Ike having some fun with his creative technical skills.

How to Use Announce Time in macOS Big Sur

10 Best Widgets for macOS Big Sur that You Should Use