Skip to content
Home News Xiaomi at No.7 on Fortune’s ‘Future 50’ List of Companies With Best Growth Potential

In the third edition of its Future 50 list that highlights the companies with the strongest long-term growth potential, Fortune Magazine has included Chinese tech giant, Xiaomi, at number 7. As can be seen from the link above, most of the companies on the list are from the tech sector, and includes names like Spotify at number 5, Tesla at number 48 and Alphabet (Google’s parent company) at number 18. 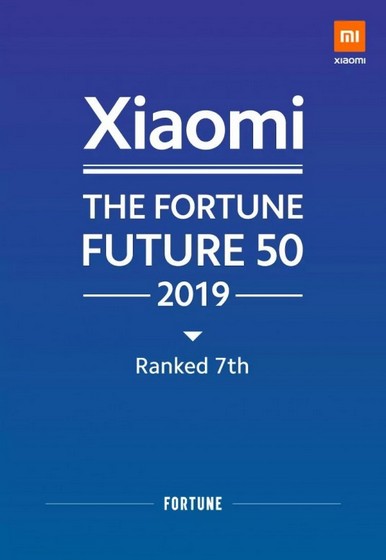 The Future 50 list is published annually by Fortune in collaboration with management consulting firm, BCG, since 2017. The list is compiled after analyzing dozens of factors to identify companies with the strongest long-term growth potential. According to Fortune, BCG examined 1,100 publicly traded companies with at least $20 billion in market value or $10 billion in revenue over the past 12 months to come to its conclusion.

While 30 percent of a company’s score is based on market potential, the other 70 percent is based on its capacity to deliver against that potential. One of the categories used to predict growth is the company’s strategic orientation, which is analyzed by an AI algorithm that Fortune says relies on natural language processing. “We also assess a company’s commitment to sustainability from its governance rating by Arabesque, a data-analytics firm”, said the report.

Having launched its first smartphone in 2011, Xiaomi has grown into one of the largest companies in the tech sector, largely on account of its stellar success in China and India. The company, however, has since branched into several other product categories as part of its plans to become a full-fledged consumer electronics player in the IoT era, launching devices like televisions, gaming monitors, Mi Beard Trimmer, Mi Truck Builder, Mi Water TDS Tester, Mi Polarized Sunglasses and more.