Use Back Tap to Launch Any App in iOS 14

If you are late to the party, let me brief you a bit. Back Tap is the part of the Accessibility suite and allows users to activate several predefined actions/features including taking a screenshot, opening Control Center, activating Accessibility features such as AssistiveTouch, VoiceOver, Zoom.

Aside from invoking these predefined features, you can also set up iPhone Back Tap custom controls with the help of Shortcuts app to carry out a number of different tasks. We are going to take advantage of this Shortcut integration to launch an app using the tap gesture.

To begin with, you need to first create a custom shortcut using the Shortcuts app and then set it up with the double or triple-tap gesture to open your favorite app by just tapping the back of your iOS device.

Creating a Shortcut to Open an iPhone App

1. Launch Shortcuts on your iPhone and tap the “+” button at the upper-right corner.

3. Next, tap on the search bar and then search for Open App, which looks like a grid of colorful squares.

5. Next up, you should see the list of apps that you can open by using the double/triple tap gesture on your iPhone. Select the preferred app. In this test, I’m going to select the Camera app.

Note: You can also use this hack to launch Google Assistant and Amazon Alexa on your iPhone by just double/triple tapping the rear panel of your iPhone. Just in case you aren’t pleased with Siri or want to make the most of rival personal assistants, you should give this hack a try.

6. Now, tap on Next at the top right corner.

7. Finally, enter a name for your shortcut and hit Done confirm.

That’s it! Your custom shortcut is now ready. To set the shortcut with double or triple-tap, follow the steps below.

Use iPhone Back Tap Custom Controls in iOS 14

1. Launch the Settings app on your iPhone and choose Accessibility. 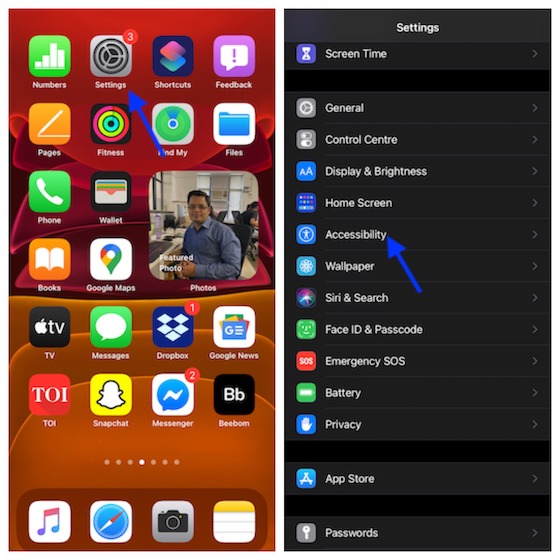 2. Now, tap on Touch and then choose Back Tap at the bottom (on the next screen). 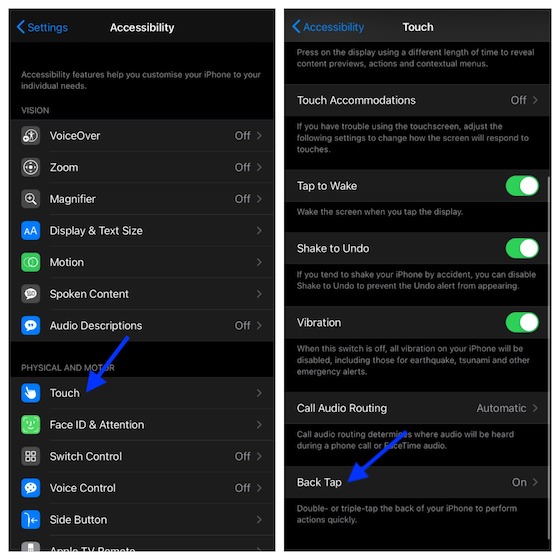 3. Next, choose Double Tap or Triple Tap. It’s worth noting that you can choose to set up any of the two or both tap gestures.

4. Next up, scroll down to the Shortcuts section and choose the name of the shortcut that you have just created.

Going forward, you can use this double or triple-tap gesture to launch any app by tapping the rear panel of your iPhone. The best part is that Back Taps work from the home screen, within apps (including third-party), and even from your iPhone lock screen. That means, you will be able to launch your favorite apps from anywhere.

Using iPhone Back Tap Custom Controls to Launch an App

So, that’s the way you can make the most of a custom back tap control to open an iPhone app. It’s indeed a super cool feature. Recently, we have covered several notable topics related to iOS 14. So, if you have missed out on some of the great ones, do check them out.

Also, share your feedback about the latest iteration of iOS and the features you have found quite appreciable in it.