Beebom
Home Alternative Siri for Android: 7 Alternative Virtual Assistants You Can Use in 2019

When Siri launched on iOS, it was the hottest topic in the tech world. However, Google’s voice search soon caught up with (and overtook) Siri. Now, Google Assistant is the best overall voice assistant on the market. That said, it is not the only voice assistant on the planet and there are many third-party assistants which can easily replace Siri for you if you are planning to switch from iPhone to Android. That’s the great thing about Android. Users don’t have to stick with the native service if they don’t want to. So, if you want a Siri-like virtual assistant on your Android device, here are 7 Siri for Android alternatives that you can try.

Siri for Android Alternatives You Should Use in 2019

The most obvious Siri alternative if you are moving from an iPhone to Android is Google Assistant. In fact, even if you are not moving to Android, you can use Google Assistant as it is now available on iOS (Free) too and it’s not bad at all. On Android, Google Assistant feels like an assistant with superpowers. Apart from answering your normal general questions and giving you access to relevant information such as your daily schedule, upcoming meetings, and more, Google Assistant can also help you control your Android device. 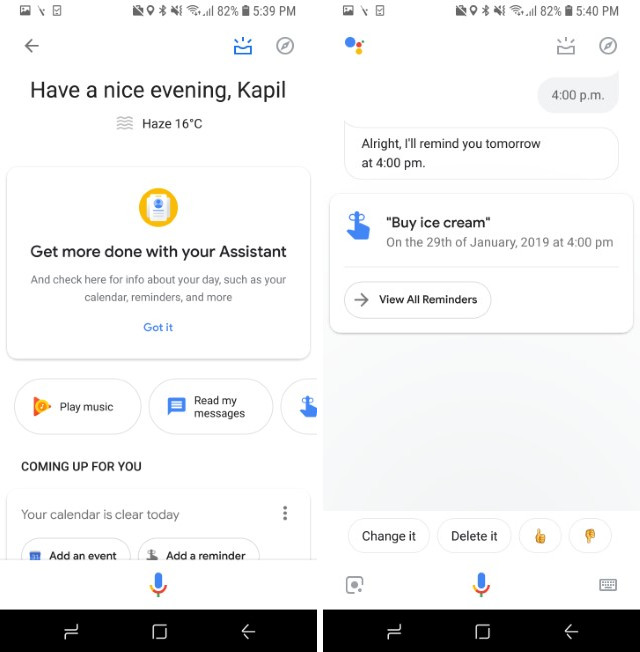 You can use Google Assistant to control things like brightness, volume, flashlight and more. You can also ask it to launch apps, take a screenshot, carry out unit conversions, simple mathematical calculations, translate phrases to other languages, and control your smart home products, among other things. In fact, we have already a published an Article on 50 best Google Assistant commands which you should certainly read to find out what all you can do with it. 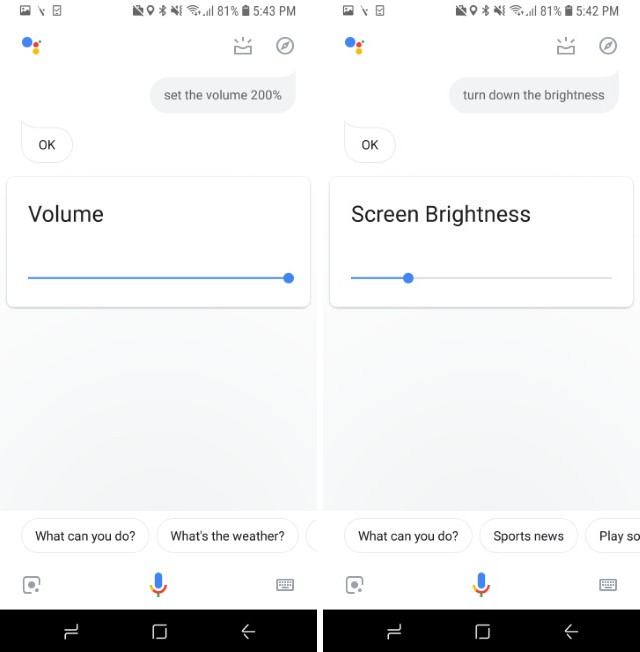 My favorite feature of Google Assistant is that it is conversational which is something other voice Assistants are not really good at. For example, I can ask Google Assistant a question like “Who is the president of United States?” and then follow it up with “How old is he?” and the Assistant will answer both questions correctly. Google Assistant is available on all Android devices running Android 8.0 Oreo and above while the support for older devices is slated to release soon.

While Google Assistant is the most powerful and versatile Siri alternative that you can find on Android, my favorite voice assistant is Amazon Alexa. The reason I prefer Alexa over other voice assistants is that I am heavily integrated into Alexa’s ecosystem. I use Amazon Music which comes free with my Prime membership, use Fire Stick TV to watch movies and shows on TV and own several Alexa powered smart speakers. That allows me to access Alexa from anywhere in my home. I just have to say the magic word and it starts listening to my commands. 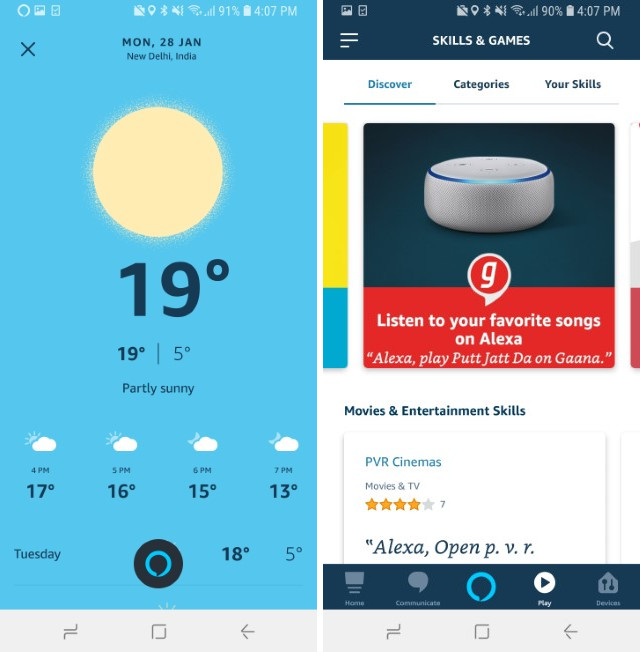 Even if you don’t Alexa powered devices, you will find that Alexa is really helpful. My favorite part about Alexa is its “Skills” which allows me to connect Alexa to various services and devices. This grants Alexa unlimited power as you can connect any service to get work done. Alexa can also easily tackle all your general knowledge questions, gives you sports score, weather information, and more, just like Siri. If you haven’t tried Alexa before, it’s time that you give it a try. 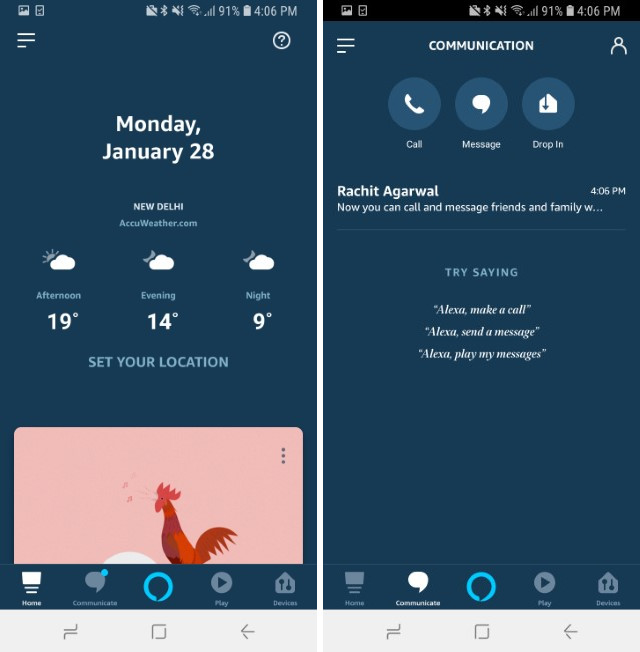 Microsoft launched Cortana on Android back in 2015 and it has become quite a capable voice assistant since its launch. The biggest benefit of using Cortana on Android is that it can act as a bridge between your Android and Windows device. It’s just like how Siri works on both iPhone and Mac, Cortana will work on Windows and Android. With this cross-connectivity, you get a lot of power. You miss a call on your phone, you will be informed on your PC, you add something to your shopping list on your PC and Cortana will remind you on your phone when you reach the store. 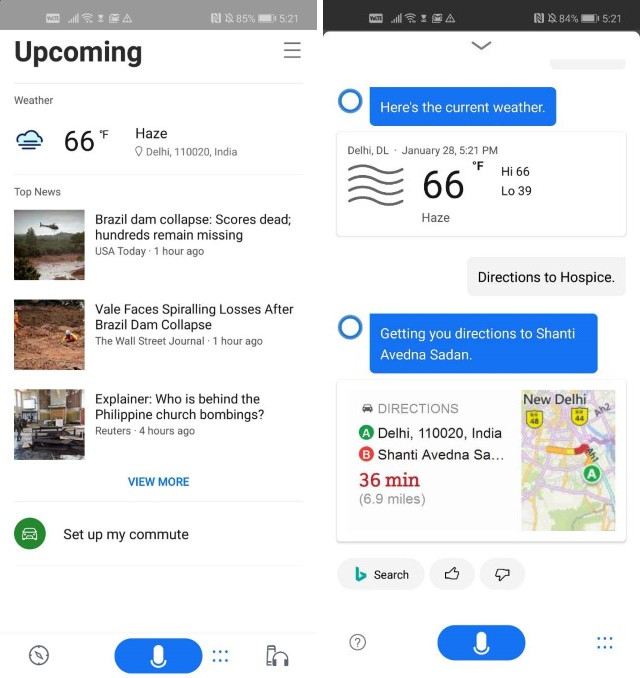 This cross connectivity is really powerful and something that Android has no native solution for. Apart from the above-mentioned awesome feature, you can expect all the usual things that you can do with a voice assistant such as asking questions, getting weather reports, sports stats, and more. That said, it’s especially useful if you own both PC and Android. 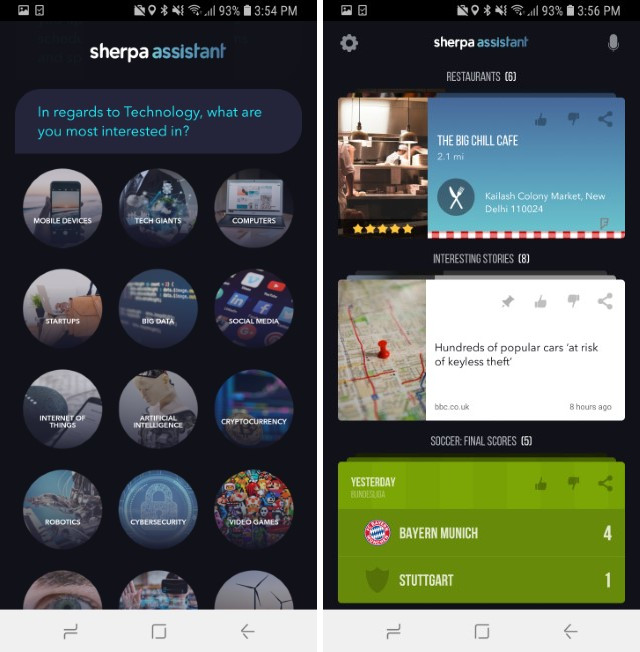 Apart from answering questions and giving you access to information that you need, Sherpa excels at providing you quick info on the things that you might need. When you open the app for the first time, it will ask some questions to get to know you. Once you answer all the questions (it take a minute or two), the app will show you all the things that it think might interest you in a simple card-based format. In my testing, I found Sherpa’s predictive technology to be quite good as it always sent me relevant information. I also love its user interface which looks quite modern and beautiful. 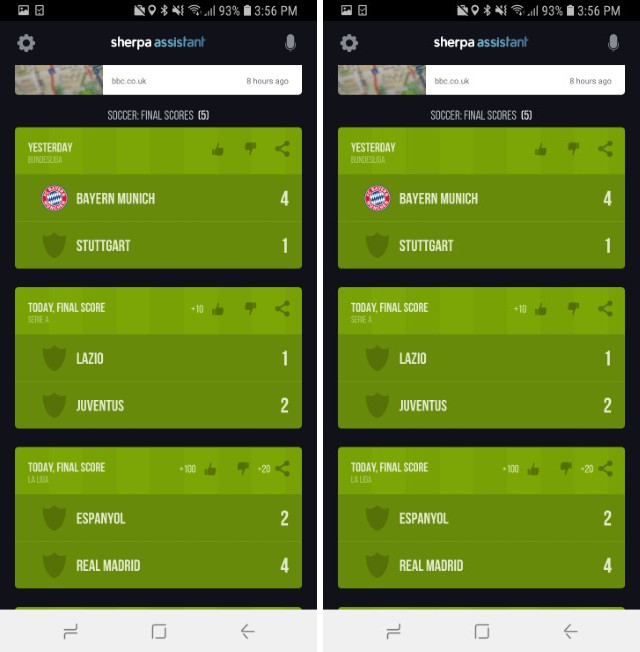 Overall, I enjoyed using Sherpa a lot. Since the app learns your behavior and preferences as you learn more, I believe that my experience will only become better in the months to come. It’s definitely one of the best Siri alternatives for Android that you can use.

Robin is an AI-based voice assistant which was developed to challenge Siri and it certainly does that. The assistant is great at answering your questions, giving you direction to your destination, finding restaurants and gas station in your area, giving out traffic alerts, sports score, and much more. As you can guess from Robin’s skills, it’s mainly geared towards people who drive a lot. Its skills are focused on helping people while driving so that they can drive without getting disturbed while being able to interact with their phone. 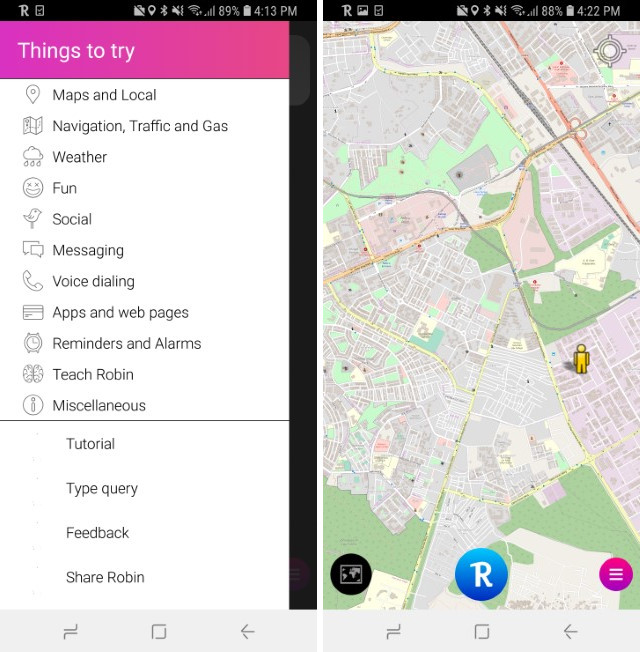 One of the biggest features of Robin is the ability to dictate and send long text messages. Robin is really good at transcribing what you say and it brings a robust speech-to-text conversion engine. Another good thing about Robin is that you don’t have to leave the app while navigating as it opens the map in the app itself. That said, I did find the app to lag a little bit while using navigation, but your experience may vary. If you drive to work and home then this is definitely worth checking out.

Lyra is a simple and easy to use voice assistant which is very good at doing basic things. The interface of the app is not as pretty as some of the other apps on this list, however, it does get the job done. From answering your questions to searching for videos on YouTube to giving directions, Lyra was able to handle everything I threw at it. Lyra is also good at setting alarms and reminders, taking notes, and translating phrases and words. Lyra doesn’t bring anything unique to the table, however, if you want a no-nonsense user interface where you want the assistant to just answer your questions and follow your commands without having to see automatic suggestions, this is the voice assistant for you. 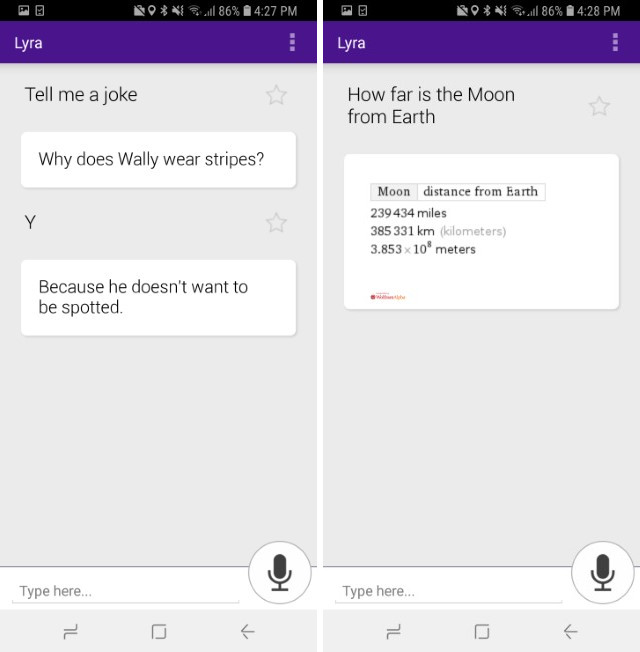 Samsung launched Bixby back in 2017 and it has turned out to be a great alternative to Siri. The only problem with Bixby is that you will need to use a Samsung device to use it and that’s why we are featuring it as a bonus as it won’t work on just any Android device. Bixby has received a lot of flakes from users and reviewers alike, but let me tell you, when it comes to using your hands-free, no other voice assistant can beat Bixby. From launching apps to sending messages to changing settings, Bixby can handle anything. In fact, you can even use a chain of commands, (for example, “take a screenshot and post it to Twitter”) and it will execute all the commands in sequence. 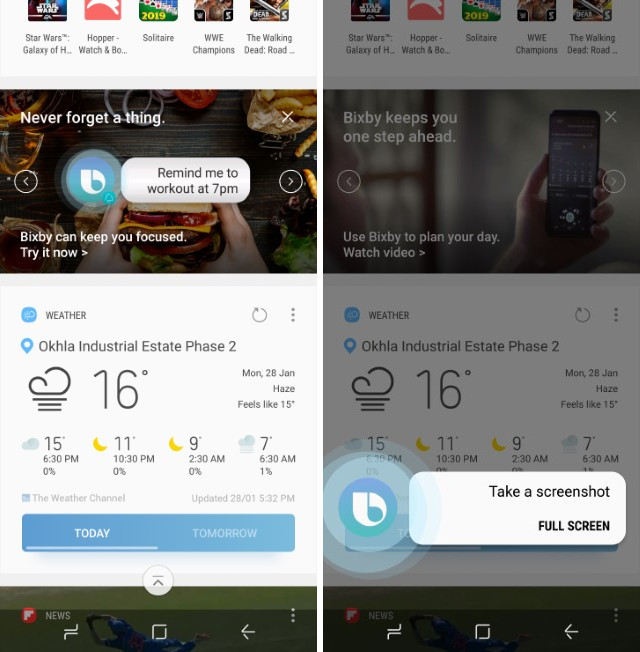 I have used Bixby a lot when I was reviewing the Note 9 and I can tell you that Bixby is no joke. Yes, there are things that I don’t like about it, but I mostly love it. One of the best things about Bixby is that its baked into the software just like Siri and hence can perform actions that other assistant cannot. If you have an option to use a Bixby supported Samsung smartphone, I urge that you give it a chance before disabling it.

Want Siri for Android? Check out these alternatives

While Siri is not available for Android, and it probably never will, these virtual assistants can get the job done. In fact, both Google Assistant and Alexa are actually way better than Siri. If it could be deeply integrated into iOS, I would happily trade Siri for Google Assistant or Alexa on my iPhone. Apart from those two, there are also various third-party assistants which can serve you well depending on your needs. Do check the list out and let us know which one you chose an why. 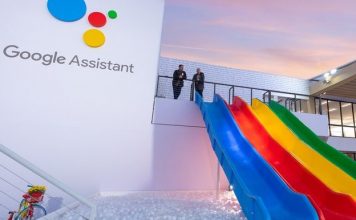 At CES 2020 in Las Vegas on Tuesday, Google announced a slew of new features for its voice-based digital assistant, making it "more helpful...
Kishalaya Kundu - Jan 8, 2020 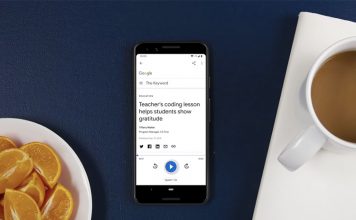 The Google Assistant is available across a number of devices in 90 different countries around the world, and Google says the smart assistant is...
Akshay Gangwar - Jan 8, 2020

Siri is the Most Popular Virtual Assistant in the World : Report

Just in case you thought Google Assistant or Alexa has gained popularity with its smart speaker lineup, a new report is here to tell...
Subin B - Dec 25, 2019 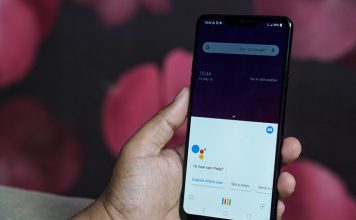 There have always been incidents when Google misinterprets something I just said and triggers the Assistant. At times like this, I wonder how much...
Subin B - Dec 22, 2019 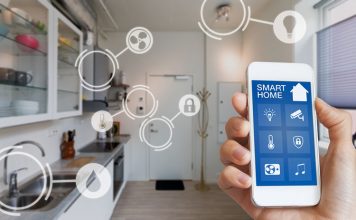 In a partnership of unlikely members in the smart home space, Apple, Amazon, and Google have joined together with the Zigbee Alliance to create...
Akshay Gangwar - Dec 19, 2019