Among a plethora of notable features, the one that has been getting a lot of traction is the “Back Tap” Accessibility feature. It allows you to not only activate commonly used features like Control Center, Notification Center, and App Switcher, but also to do things like triggering Siri, and even snapping a screenshot with just a quick double or triple tap on the back of the iPhone. Better still, you can even customize the Back Tap Accessibility feature in iOS 14 on your iPhone to perform actions quickly.

Though this new Accessibility feature has been primarily designed for differently-abled people, anyone can take advantage of it to carry out certain tasks without having to dive into the Settings or press the physical buttons. Notably, iOS 14 lets you customize both the double and triple back taps so that you can set the preferred feature/action to be activated. Sounds interesting? Let me show you how it works!

1. Open the Settings app on your iOS device.

2. Now, tap on the Accessibility option.

4. Next up, scroll down and tap on Back Tap.

Choose the preferred gesture as per your convenience. Depending on your needs, you can fine-tune both the double and triple taps to activate a specific iOS feature.

6. Now, select the desired back tap action from the list of options like Accessibility Shortcut, AssistiveTouch, App Switcher, Control Center Volume Up/Down, VoiceOver, and more. Then, quit the Settings app. 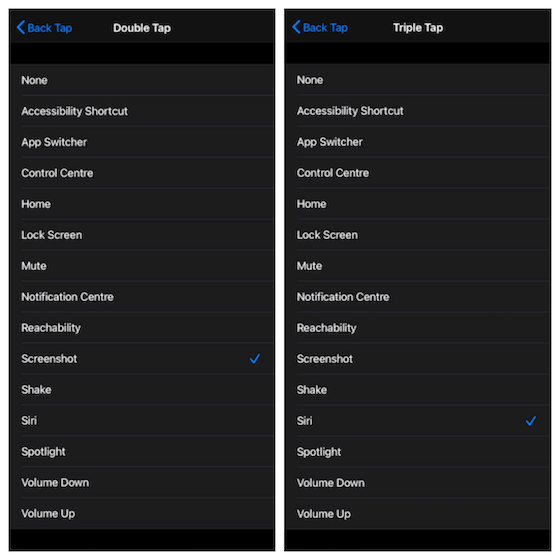 I’m going to set the double-tap for screenshot and triple-tap for Siri. What about you?

7. Finally, double or triple tap on the back of your device to invoke the selected action.

Here are all the actions that you can assign to double or triple taps using the back tap accessibility feature:

Use Back Tap Accessibility Feature in iOS 14

So, that’s the way you can fine-tune the all-new back tap Accessibility feature. Ever since I installed iOS 14, I have been using this nifty little feature. It works as expected without any hiccups. As there are tons of equally cool features in the latest iteration of iOS, I’m going to share them. Like we recently covered the incredible Sound Recognition feature, which you can read by clicking on the link. So, stay tuned so that you don’t miss out on them.