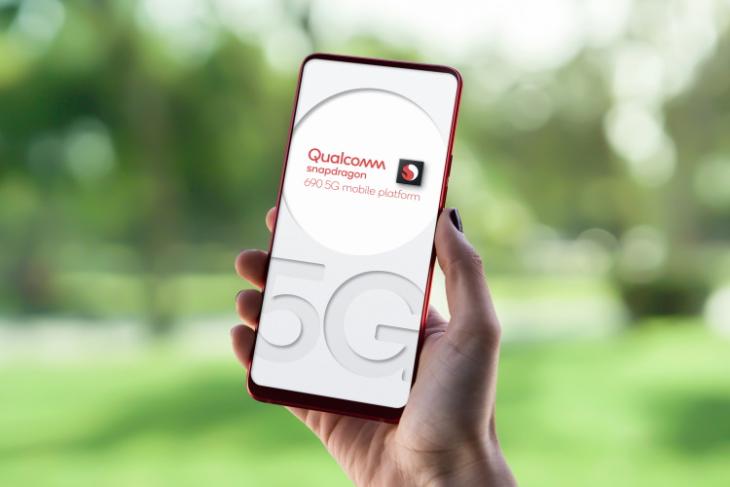 Qualcomm continues to march on towards its mission to grow 5G adoption and make this technology accessible to the masses. The Snapdragon 765 5G, announced back in late-2019, was the first step in this direction. And now, the first-ever 5G chipset in the 600-series, Snapdragon 690 5G, has made its debut in line with Qualcomm’s promise to debut Snapdragon 600- and 700-series chipsets with 5G support from last year.

With today’s announcement of the Snapdragon 690 5G, Qualcomm aims to bring 5G to even lower price brackets – under Rs. 20,000 if you talk about India. This chipset can be seen as a successor to Snapdragon 675, which can be found in the Redmi Note 7 Pro from earlier last year.

Starting off with the basics, Snapdragon 690 5G features 64-bit octa-core Qualcomm Kryo 560 CPU with clock speeds up to 2.0GHz. It’s a brand new CPU with the Cortex-A77 cores that have previously only been used aboard the Snapdragon 865. This is only the second chipset in Qualcomm’s portfolio to feature a 500-series Kryo core – the first is Snapdragon 865’s Kryo 585.

The company boasts that it delivers up to 20% performance improvement over its predecessor, which is great for mid-range users. It supports up to 8GB 1866MHz RAM.

The chipset also includes a new Adreno 619L GPU onboard, which sits above the Adreno 618 GPU that’s found on the Snapdragon 720G and 730G mid-range chipsets. Qualcomm claims that it supports up to 60% faster graphics rendering than its predecessor. This means you can expect gaming performance better than (or on par) with its elder sibling.

The highlight of the Snapdragon 690, well, is 5G connectivity. Qualcomm has baked a new Snapdragon X51 5G Modem-RF system into this chipset. It supports both standalone (SA) and non-standalone (NSA) networks, offering download speeds up to 2.5 Gbps and upload speeds up to 660Mbps. It supports most global bands and multi-SIM functionality but lacks support for mmWave networks. Snapdragon 690 supports only sub-6GHz 5G networks.

Snapdragon 690 is the first-ever Snapdragon 6-series mobile platform to support up to 120Hz display.

Now, let’s talk about the things that would interest you the most. Snapdragon 690 5G supports up to 120Hz Full-HD+ display with HDR10+, up to 192MP photo capture, true 10-bit 4K HDR video recording (thanks to the Spectra 355L ISP on board), and slow-mo videos at 720p @ 240 FPS. The 5th-Gen Qualcomm AI Engine and Hexagon 692 onboard enables smart camera/ video and other AI voice features such as multiple voice assistants, far-field detection, and more. The chipset supports indigenous satellite navigation system NavIC as well.

When Will the First Snapdragon 690 5G Phone Launch?

If you plan on buying an affordable 5G phone, then you will need to wait a couple-odd months. Smartphones powered by Snapdragon 690 “are expected to be commercially available in the second half of 2020,” reveals Qualcomm.

The company’s OEM partners like HMD Global, LG, Motorola, and several others are already working on devices powered by the Snapdragon 690. We can expect the Nokia 7.3 or the next LG Velvet phone to be backed by this chipset.