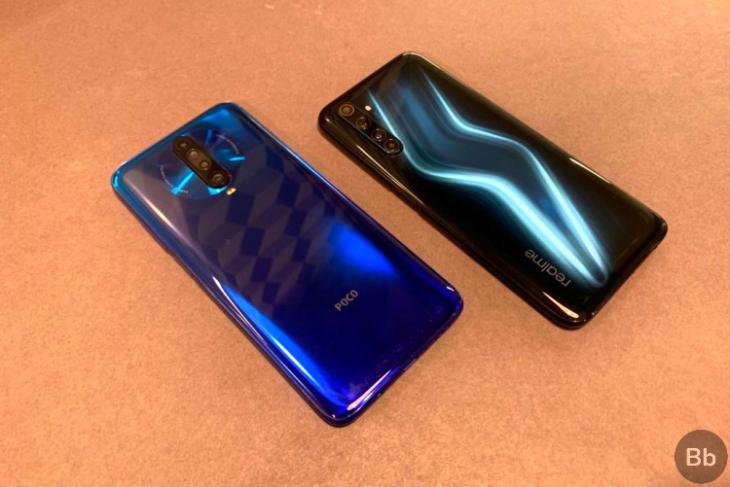 With the mobile gaming industry expected to be worth more than $174 billion by 2021, Qualcomm turned its attention to building gaming-centric chipsets earlier last year. It expanded the 700 series to include the Snapdragon 730G gaming chipset, which we’ve seen on a number of premium mid-range phones from Xiaomi and Realme. It sure is a powerful chipset for mobile gamers but we are now seeing phones powered by the new Snapdragon 720G chipset in India.

Before we go ahead and compare the two chipsets in details, here’s a quick look at the specifications of the Snapdragon 720G vs Snapdragon 730G:

Right off the bat, you can see that both the Snapdragon 720G and 730G are built upon Qualcomm’s 8nm fabrication process. This means both the chipsets are equally power-efficient. They both sport eight cores, with the same big.LITTLE configuration, but the internal cores and clock speeds differ ever so slightly.

While the Snapdragon 730G packs inside the Kryo 470 cores, Snapdragon 720G comes baked with the new Kryo 465 cores. Names aside, there isn’t a lot of difference between the two. Both the chipsets have two Cortex-A76 and six Cortex-A55 cores. The smaller cores are clocked at 1.8GHz in both chipsets whereas the big cores on the 720G are clocked 100MHz higher than the 730G, as seen in the table above. 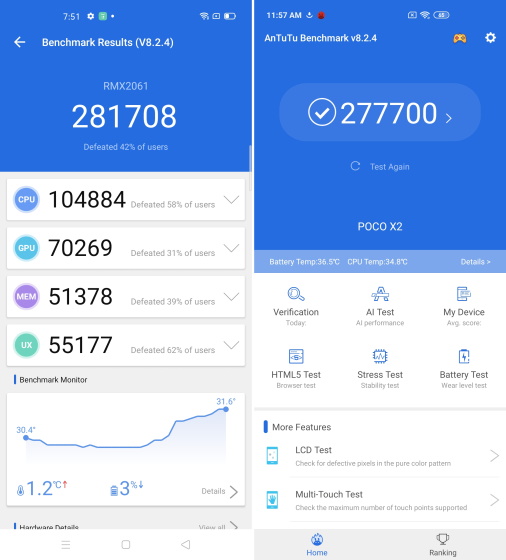 Taking a look at the Geekbench and AnTuTu benchmark scores for Snapdragon 720G vs Snapdragon 730G, you see that both chipsets are on par in terms of performance. The AnTuTu score of both chipsets hovers around the 2,80,000 mark, with the 720G mostly scoring higher than the 730G chipset. 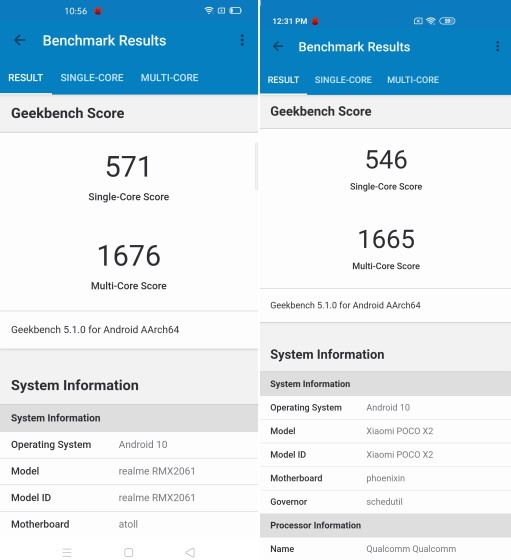 Next up, the GPU has now become one of the most defining factors for phone buyers in India today. The PUBG Mobile craze doesn’t seem to be slowing down anytime soon, so Qualcomm has included the Adreno 618 GPU in both the Snapdragon 720G and 730G chipsets. It also offers the Elite Gaming engine, along with features like the Game Fast Loader, Jank Reducer, HDR gaming, Game Anti-Cheat Extensions, and more.

If you are not aware, the Adreno 618 GPU is said to offer up to 75 percent performance gains over the Snapdragon 712 chipset. We ran the 3DMark benchmark app on devices powered by these two chipsets. The results, as you can see below, again show that the Snapdragon 720G and 730G are equal in terms of graphical performance. A marginal difference can be seen in the scores below but that’s almost negligible. 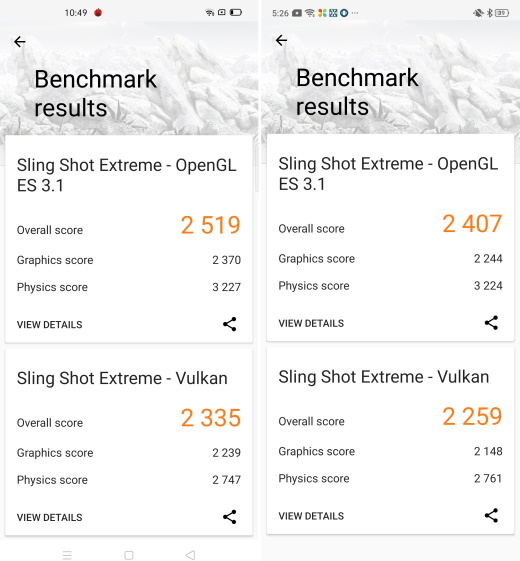 Qualcomm has essentially baked the same Spectra 350 ISP in both the chipsets but here’s a minor difference between the two. Snapdragon 720G includes a downgraded, lighter variant of Spectra 350, dubbed the Spectra 350L but both support up to 4K at 30FPS video recording.

Apart from videos, both the Snapdragon 730G and 720G support up to 192MP photo capture and you can check out the supported multi-camera setups in the table above.

Editor’s Note: This section has been updated to reflect that Snapdragon 730G doesn’t support 4K at 60FPS video recording. A minor confusion with 4K/60FPS video playback caused the error.

With the growing use-cases of smartphones, Qualcomm is constantly improving its AI Engine with each chipset iteration. Same is the case with Snapdragon 720G and 730G. While the former comes equipped with the Hexagon 688 DSP (4th-gen AI Engine), the latter features the Hexagon 692 DSP. The chipmaker is offering a 5th-gen AI Engine aboard the latest Snapdragon 720G chipset, along with the improved Hexagon Tensor Accelerator and Scalar Accelerator.

We ran the AI Benchmark app on devices powered by both the Snapdragon 720G and 730G, well, to see the improvements that Qualcomm has debuted with its new chipset. And, the results attached below reveal that the Hexagon 692 DSP does bring some AI improvements, thus, offering improved experience with AI assistant and image editing apps. 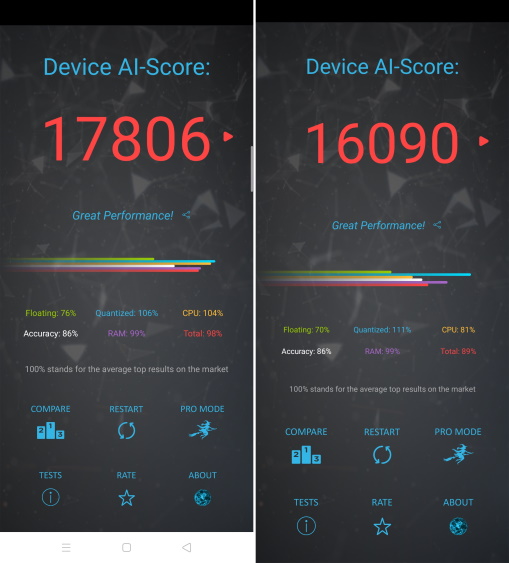 Finally, Snapdragon 720G and 730G are exactly the same in terms of connectivity. Both the chipsets come equipped with the Snapdragon X15 LTE modem, offering peak download speeds up to 800Mbps and upload speeds up to 150Mbps. Both chipsets are 802.11ax (or Wi-Fi 6) ready, supports Bluetooth 5.0, Dual SIM Dual VoLTE, VoWiFi (i.e. voice over Wi-Fi), and more.

One thing that sets the Snapdragon 720G apart from the 730G here is the support for India’s NavIC positioning system. If you own a device backed by Snapdragon 720G, your device will be able to latch on to any of the six NavIC satellites for improved GPS support. You can check if your device supports NavIC or not using the apps listed here. 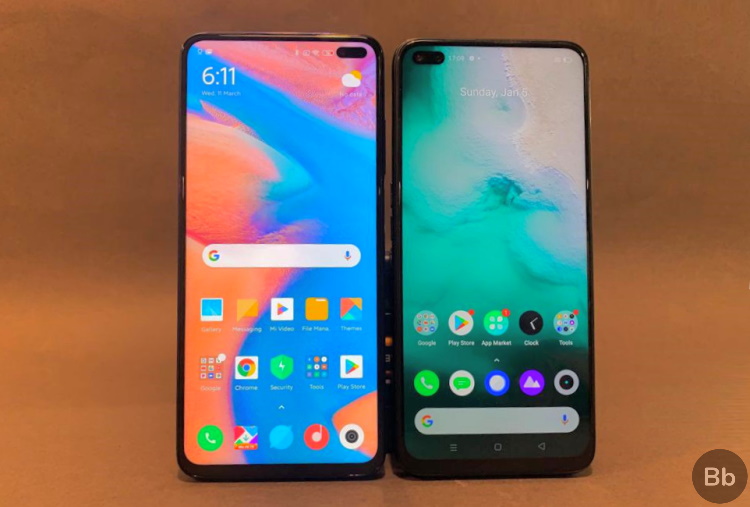 Snapdragon 730G does have an upper hand in the camera department, well, because of the more powerful ISP but otherwise, both the Snapdragon 720G and 730G are equally power-efficient. You can’t go wrong with a device powered by either of the two chipsets. That’s my take on Snapdragon 720G vs Snapdragon 730G, but which do you prefer and why? Let us know in the comments below.