The month of February has been quite an eventful one for India’s flagship smartphone market. Samsung may have kicked things off with the launch of its Galaxy S20 lineup, but brands such as iQOO (Vivo’s gaming-centric brand) and Realme have also cashed on the opportunity to be the first to bring 5G phones to India.

Samsung missed out on this title, which is okay, but what’s disappointing is that the Galaxy S20 series launched with Exynos chipsets in tow in India instead of the latest Snapdragon 865 that comes baked inside iQOO 3 and Realme X50 Pro. We expected the Korean giant to bring Snapdragon-laden flagships to India as Galaxy S10 Lite, which launched just weeks ago, packed a Snapdragon chipset. That wasn’t the case though.

Well, I recently managed to get my hands on the Galaxy S20 Plus and iQOO 3, one of the first Exynos 990 and Snapdragon 865-powered smartphones respectively to find their way to India. With both the phones on me, I decided to go ahead and benchmark Samsung’s in-house Exynos 990 chipset and compare it to the Snapdragon 865. Let’s take a quick look at my Snapdragon 865 vs Exynos 990 benchmark test:

Before we take a look at the benchmark numbers, let’s quickly compare the technical specs of both the chipsets:

First up, we’ve got the AnTuTu benchmark comparison between the Snapdragon 865 and Exynos 990. The result is as you would expect it to be. The Snapdragon 865 chipset has scored way higher than the Exynos 990. The iQOO 3’s AnTuTu score may not close to the 610,000 mark (which would be 100k more than Exynos 990’s score) as marketed by the company but it’s still one of the highest that I’ve seen to date. 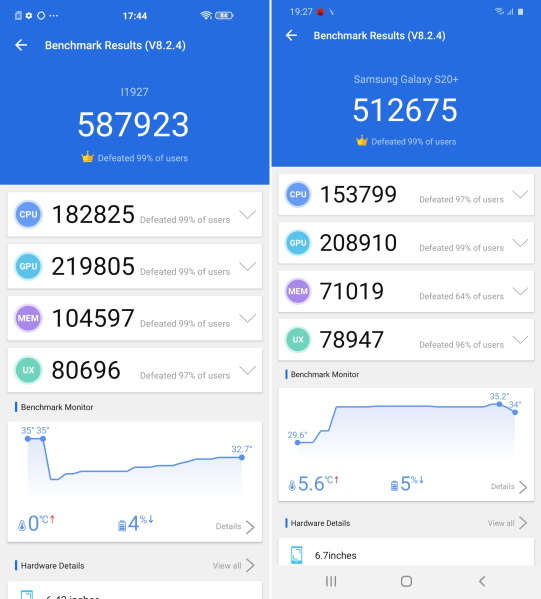 Next up, we obviously ran the Geekbench 5 test on both phones to see which of the two chipsets performs better on a hardware level. The results are similar to what we’ve seen above. Snapdragon 865 places above the Exynos 990 in terms of both single- and multi-core scores in Geekbench, scoring 927 and 3388 compared to 849 and 2725 respectively. 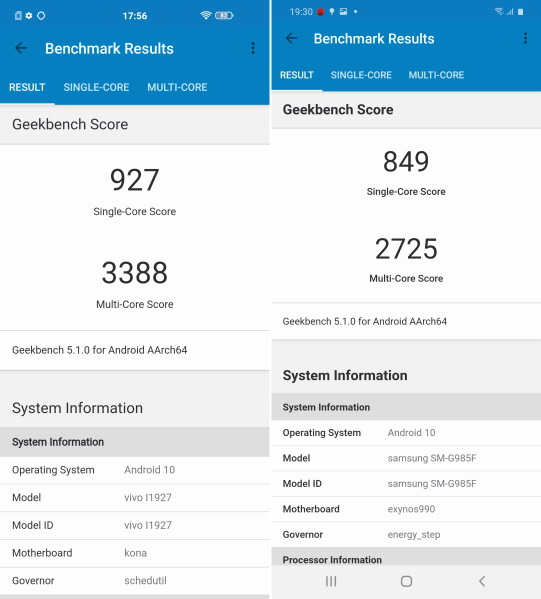 As you can see in the screenshot above, the Kryo 585 cores (based on Cortex-A77 and Cortex-A55) in Snapdragon 865 are more efficient and powerful when compared to the cores (including a custom Mongoose core, Cortex-A76, and Cortex-A55) that make the Exynos 990. So yeah, users fretting over India getting the Exynos variants of Samsung flagship phones is justified.

Moving to graphics performance, we ran 3DMark’s Sling Shot Extreme test on both the iQOO 3 and Galaxy S20 Plus. As you can see in the screenshots, the Adreno 650 GPU aboard the Snapdragon 865 outperforms the Mali-G77 GPU in the Exynos 990 – only by a slight margin. Snapdragon 865 appears to handle OpenGL workloads slightly better than the Exynos 990. But, both the chipsets are on par when it comes to Vulkan graphics support. 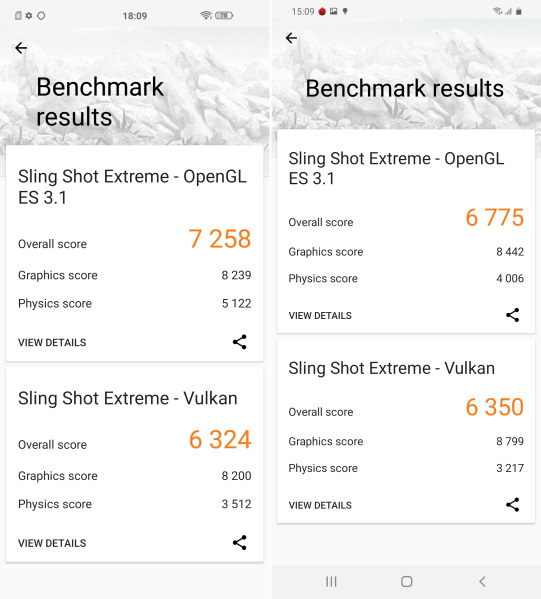 We ran the PCMark benchmark app on both the iQOO 3 and Galaxy S20 Plus to reach a surprising conclusion. The Exynos 990 in the latter may lag behind the Snapdragon 865 chipset in every department. But, Samsung’s in-house chip surpassed Qualcomm’s chip when talking about performance figures. 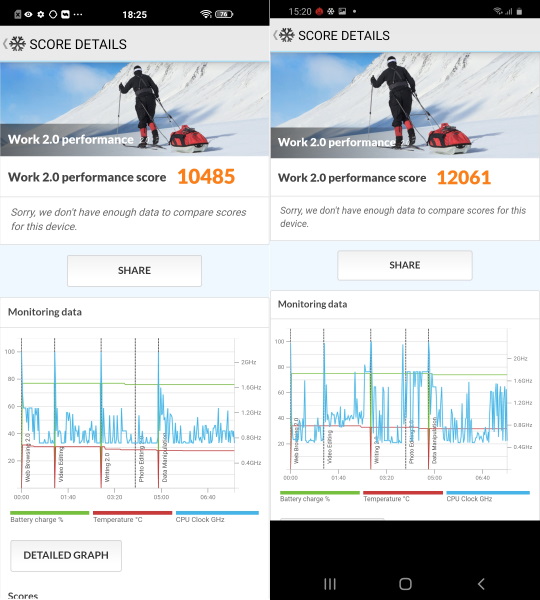 The answer is simple. Samsung adopted a faster F2FS file system with the Galaxy Note 10 Plus and that seems to have been used here as well. Most Android phones are using the EXT4 file system.

In comparison to the 5th-gen AI Engine and Hexagon 698 DSP aboard the Snapdragon 865, the Exynos 990 comes equipped only with a dual-core NPU. Qualcomm appears to have a substantial upper hand in this department, as seen from the AITuTu benchmark scores. While the Snapdragon 865 inside the QOO 3 scores 454,143 on AITuTu, Exynos 990’s score s under 100,000. 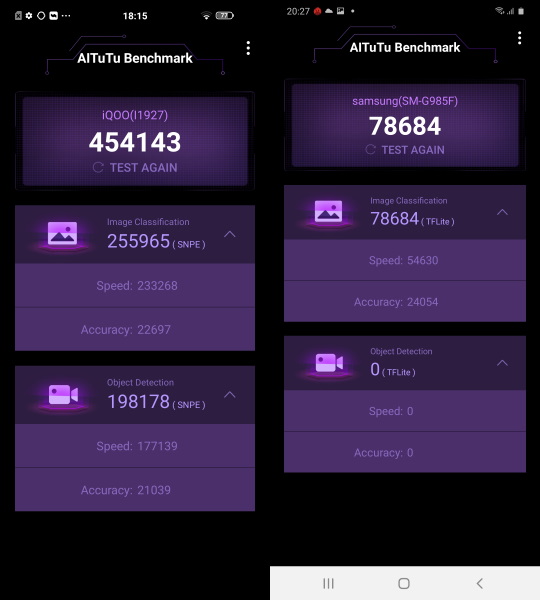 Snapdragon 865 does supremely well in both image classification and object detection benchmark tests, but the Exynos 990 fails to score any points in the latter.

The aforementioned benchmark tests paint a picture we were already familiar with. I had high hopes from Samsung’s Exynos 990 chipset but it falters behind Qualcomm’s newest Snapdragon 865 chipset in almost every department, except one – the overall performance. The faster file system, coupled with UFS 3.0 storage, gives Samsung’s newest flagships an edge in this department otherwise, Snapdragon 865 should be a better performer among the two. Well, at least on paper.

Here is the BTS Edition of Galaxy Buds+ in Leaked Images