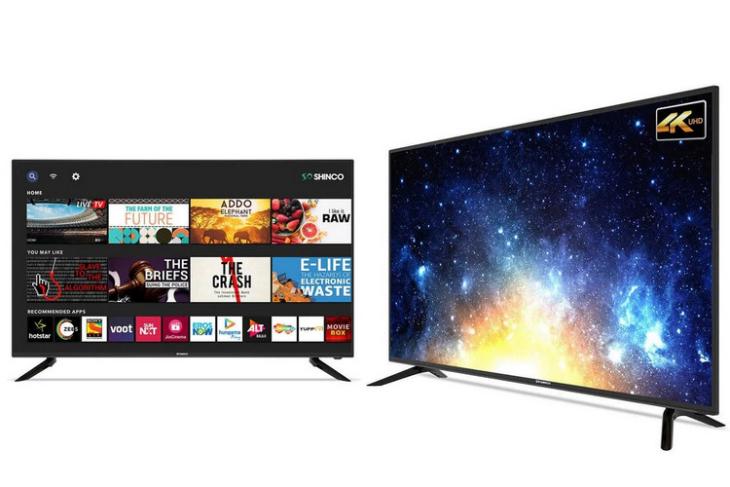 Videotex International’s consumer electronics brand, Shinco, has launched its latest smart TVs in India. The lineup consists of three new models, including the SO43AS, the SO50QBT and the SO55QBT. They come with 43-inch, 49-inch and 55-inch displays, respectively. The first one has a Full-HD (1920 x 1080) panel, while the other two come with 4K UHD (3140 x 2160) screens.

The entire lineup runs Android TV with a custom ‘Uniwall’ skin on top. While the 43-inch model runs an Android 8-based skin, the larger versions come with Android 9-based software. Hardware includes a quad-core Cortex-A53 processor, 1GB of RAM and 8GB of internal storage for the entry-level model, while its larger siblings are powered by a quad-core Cortex-A55 chip and ship with 2GB of RAM and 16GB of storage.

There’s also a ‘Movie Box’ app that offers 7000+ free movies across multiple genres in 16 different languages. Netflix, Amazon Prime Video, and YouTube can also be downloaded from the Aptoide TV Store. Shinco also claims that the TVs allow users to stream live news without subscribing to any news app.

All three models are up for sale on Amazon, having been launched as part of the e-tailer’s Amazon Prime Day event. The Shinco SO43AS is priced at Rs. 16,999, while the SO50QBT is priced at Rs. 24,250. The top-end SO55QBT, meanwhile, is priced at Rs. 28,299. You can even get them for a little less during the Prime Day sale today. They’re all available exclusively in Black.