After a lot of teasing, the Redmi Note 5 Pro is finally here, and boy does it look good. The device packs in some serious hardware, especially for its price. The device ships with the Snapdragon 636 coupled with 4GB RAM while a 12MP and 20MP sensor camera are present on the rear and front side of the device respectively. Additionally, the device comes with Xiaomi’s latest OS, the MIUI 9. However, while the UI is one of the simplest to use, there are a few things you might miss out on. Well, fret not, as we are here to help. Below, we’ve curated a list of 13 best Redmi Note 5 Pro Features and Tricks that you should definitely know about. So without wasting any more time, let’s get right into it:

One of the major features of the Redmi Note 5 Pro is the beautiful 18:9 display. Now, with a large display, you also get the option of enabling fullscreen mode for your apps. Basically, it stretches the apps that do no support the 18:9 aspect ratio natively to work in the higher aspect ratio, instead of displaying an odd black bar at the bottom. To do so, follow the steps below: 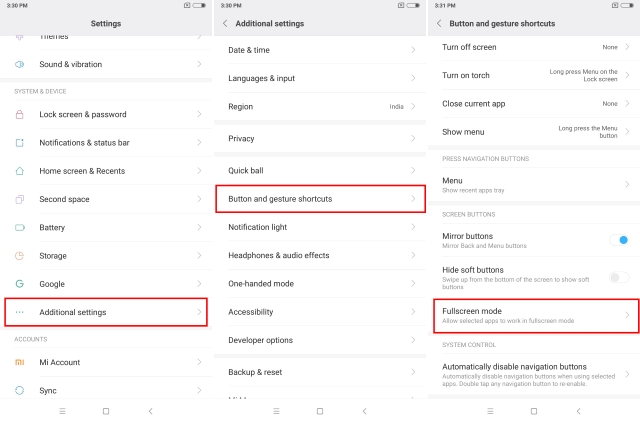 2. Now, simply toggle the buttons next to each app to enable/disable fullscreen mode for that app. 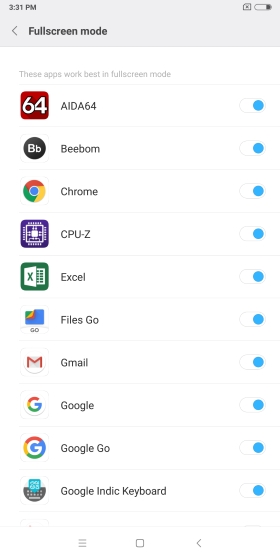 1. Open the camera app and select the “Photo option”. Tap on the “switch” icon to change to your front-camera. 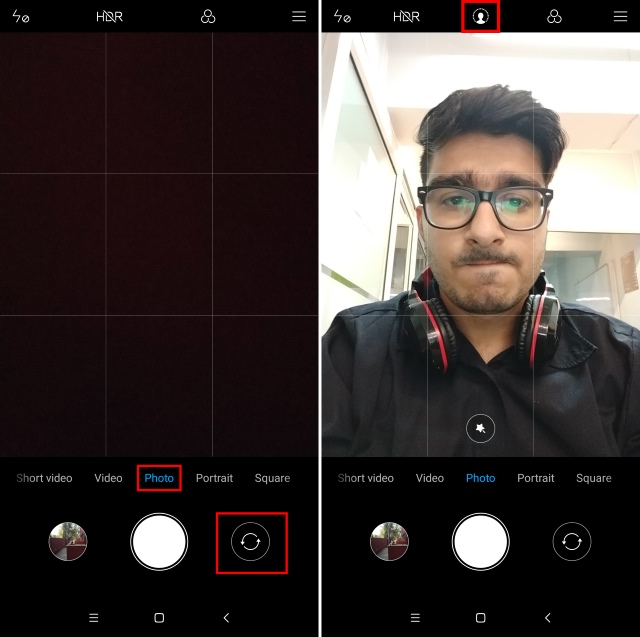 2. Now, tap on the person icon in the top row as shown in the image. This will enable the portrait mode or the depth-effect. And that’s it. Images clicked using this mode will have a blurred background, thus effectively creating a portrait image. 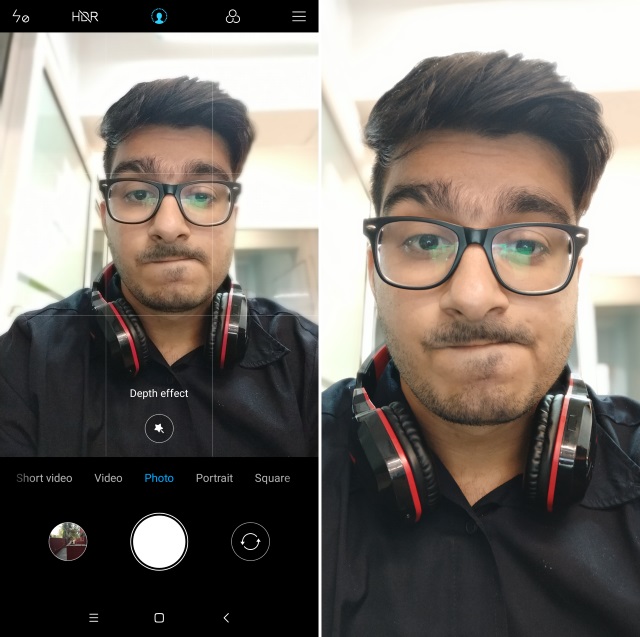 Speaking of cameras, the Redmi Note 5 Pro has one of the most feature-filled cameras in the mid-range segment. In that extensive list of features, EIS is also present on the device. Yes, that’s right. To enable Electronic Image Stabilization on your device, follow the steps below:

1. Open the camera app and switch to the “video” mode. Now, tap on the hamburger menu button in the top-right corner. Next up, tap on “Settings”. 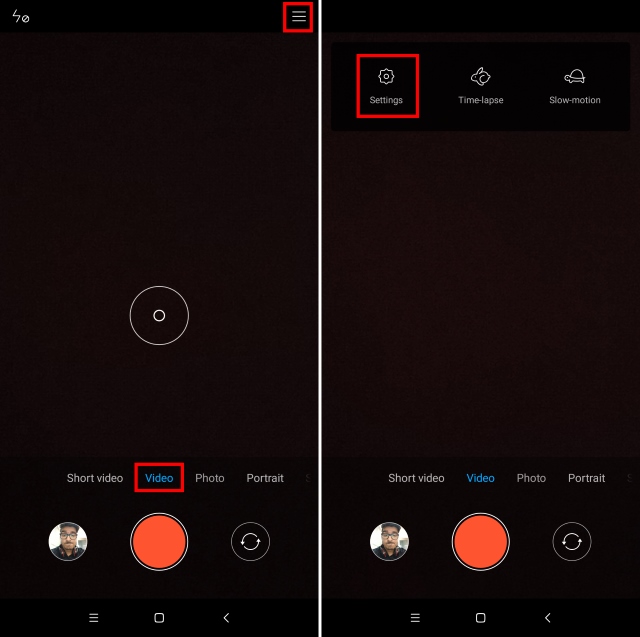 2. You’ll now see an option for “Image Stabilization”. Simply enable the toggle next to it and EIS will be turned on. 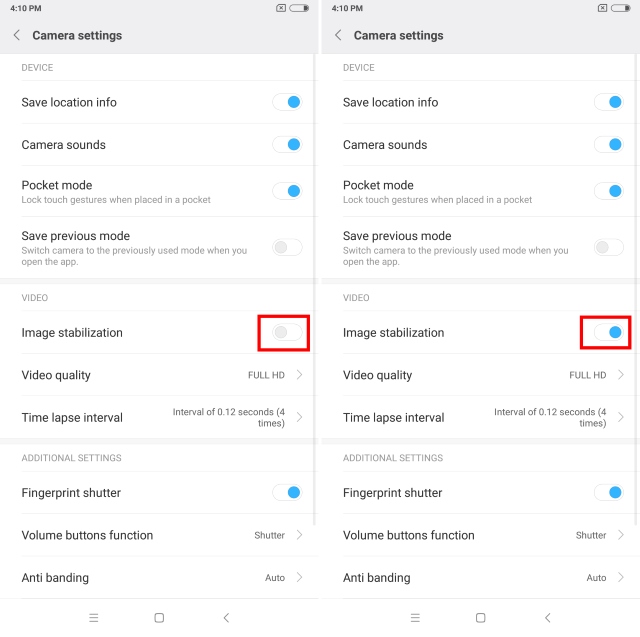 The Redmi Note 5 Pro ships with MIUI 9 based on Android Nougat. As such, it inherits a ton of AOSP features, one of the most important being a better notification management system. Thanks to MIUI 9 on your Redmi Note 5 Pro, you get Quick Reply, which allows you to reply to messages from the notification itself.

With the Redmi Note 5 Pro comes MIUI 9, and with that, come a plethora of homescreen improvements. For instance, when you will select multiple apps to move them, you will see a representation of all the pages at the bottom of the screen. Also, the widgets panel receives a much-needed facelift, since the widgets get their own page with vertical scrolling, just like on Stock Android ROM.

Overall, the homescreen feels super smooth and fluid, and you can do just about everything with the stock launcher only, without the need for a different third-party launcher app.

During the launch event, Xiaomi stated that the Indian market is one of their most successful markets, and they will continue to roll out features specific to this market. In respect to that statement, Xiaomi has added Indian-oriented features to the App Vault in MIUI 9 present on the Redmi Note 5 Pro. 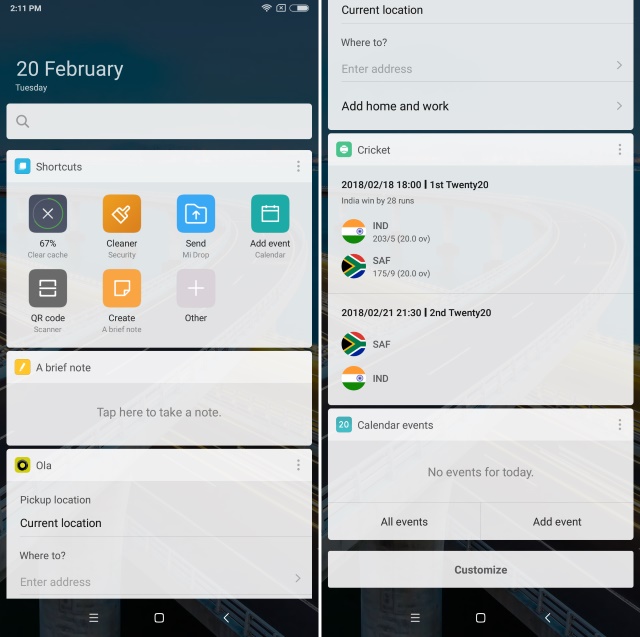 With App Vault, users will be able to access important applications like Paytm or Ola by simply swiping left from the home screen. You can get real-time information about your booked ride, or make payments swiftly simply by the swipe of a screen.

What’s a user interface if it is not easy to operate, right? For your ease, Xiaomi has also added the Quick Ball feature to the Redmi Note 5 Pro, which is similar to the Assistive Touch found on iPhones. To enable this, simply head over to Settings -> Additional settings -> Quick ball, and enable the toggle next to “Turn on Quick ball”. 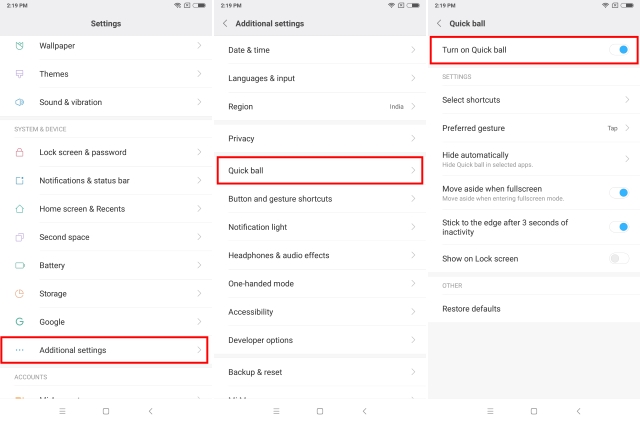 You can now customize the shortcuts for the quick ball, and use it as an alternative to the on-screen navigation buttons.

Speaking of navigation buttons, Xiaomi allows you to customize your Navigation Bar as you deem fit. Simply head over to Settings -> Additional settings -> Button and gesture shortcuts, and scroll down to the “Screen buttons” section. 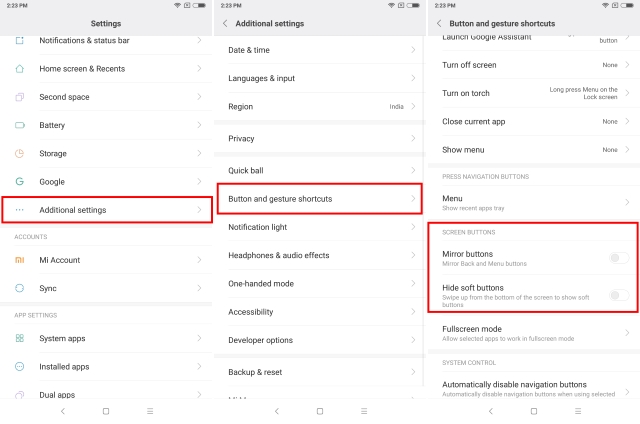 Here, you can enable the toggle next to “Mirror buttons” to swap the position of the recents and back buttons. Also, enabling the toggle next to “Hide soft buttons” will hide the navigation bar, allowing you to make more use of your 18:9 display. Also, you can bring that back up with a swipe up from the bottom edge. 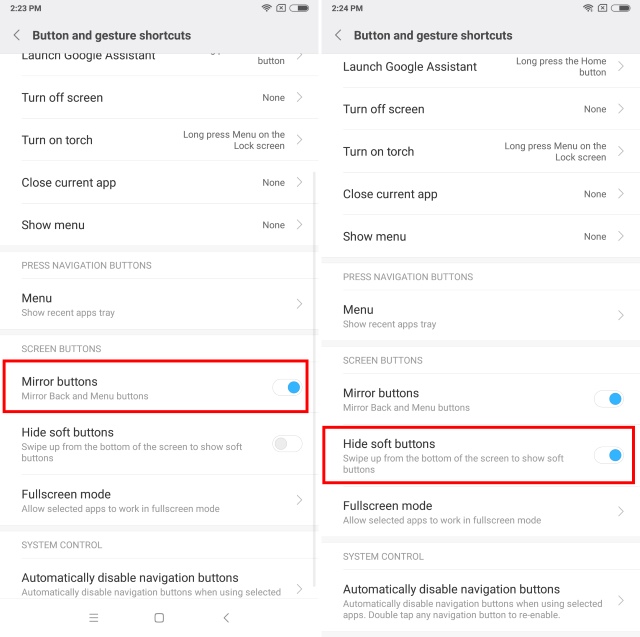 With a 5.99-inch screen, split-screen multitasking is bound to make things easy for everyone. In order to open your apps in the split screen mode, simply tap on the Recent button and you will see the “Split Screen” written at the top of your screen. Tap on it and then drag the app you want to use in the split screen mode. Once you select an app, the option to select the other app will come in the bottom half of the screen. 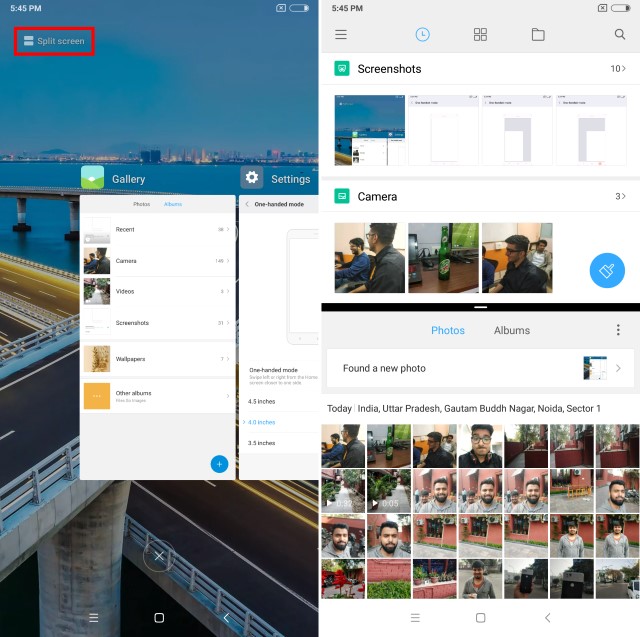 The Redmi Note 5 Pro has a huge 5.99-inch display, and it can get quite a tedious task operating it with a single hand. Well, thankfully, Xiaomi understands this, and the Redmi Note 5 Pro comes with a special one-handed mode. To enable that, follow the steps below: 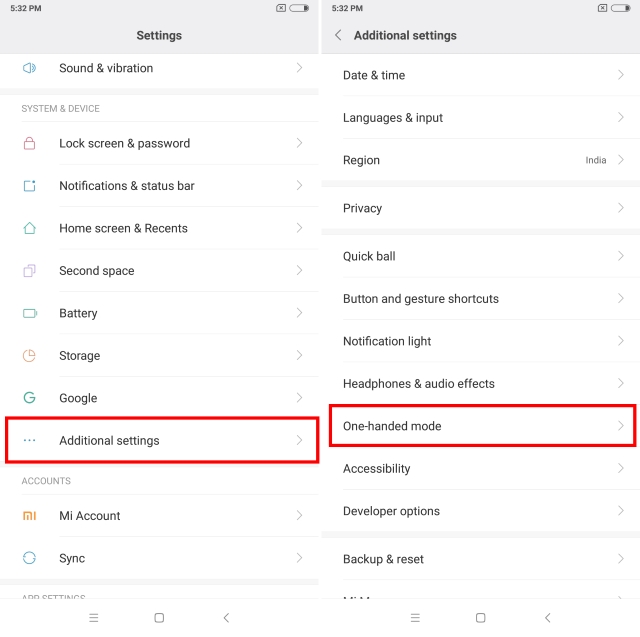 2. Now, select the size of the screen you’d like and enable the toggle for the One-handed mode. 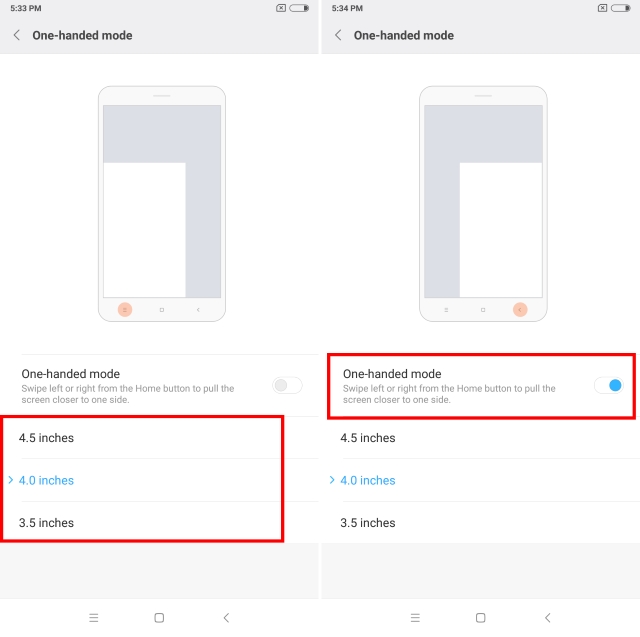 3. And that’s it. Swipe left or right from the Home button to pull the screen closer to one side and enable one-handed mode.

The main lock-screen of the Redmi Note 5 Pro is similar to the ones found on previous edition devices. But that’s just the first glance. Thanks to MIUI 9, you get some handy shortcuts on your lockscreen only. 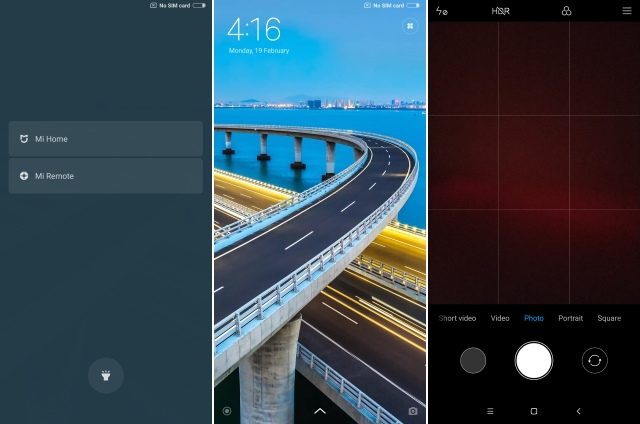 Swiping right on your lockscreen will take you to a new page showing you all the Xiaomi connected devices like Mi Home and Mi Remote, as well as a single toggle for the flashlight/torch. Oh, and swiping left on the screen will take you directly to the camera to capture all those beautiful moments without going through the hassles of unlocking your device.

The Redmi Note 5 Pro is a dual-SIM device, but wouldn’t it be great if you could run WhatsApp on both those numbers on one single device? Well, thanks to MIUI 9 on your device, you can. The device comes equipped with the “Dual Apps” feature that allows you to create a copy of another app, such as Facebook, Instagram, WhatsApp, and use different numbers/accounts on them while being on the same device. To make use of this feature, simply head over to Settings -> Dual apps and enable the toggle next to the app you wish to create a copy of. 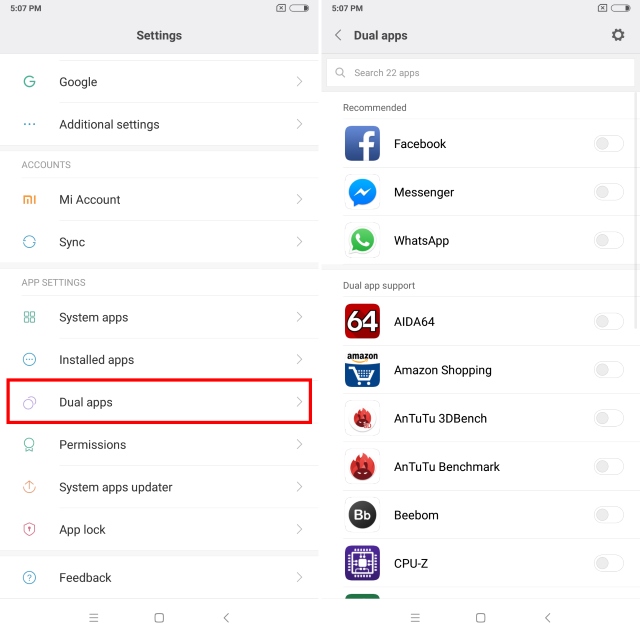 The Redmi Note 5 Pro comes equipped with MIUI 9, and with that comes the new advanced gallery. The gallery on this device is one of the best you’ll ever use, simply due to the ton of options that come with it. Apart from organizing your images to seeing the EXIF info and more, the gallery comes with a few other tricks as well.

Using the MIUI 9 Gallery, one can easily create collages. Oh, and if that wasn’t enough for you, the device also allows you to remove unwanted objects from photos. All in all, the Redmi Note 5 Pro not only has a great camera, but also the perfect companion app.

Face Unlock is becoming a common trait amongst smartphones these days, ever since Apple did it with the iPhone X. The feature has since then been ported on the OnePlus 5T, the Honor View 10, and many other devices as well. So how could Xiaomi be any different? The Chinese giant has announced that the Redmi Note 5 Pro will soon get an update with Face Unlock capability.

According to Xiaomi, the Redmi Note 5 Pro will be the company’s first device to sport the Face Unlock capability. The company claims that the face unlock can authenticate and unlock your device in under 0.2 seconds. The phone is expected to get an update for the same in March 2018, so hang in there. Once the update is there, you’ll be able to activate Face Unlock from Settings -> Lock screen & password.

Apart from Face Unlock, the next update for the device is also said to include the capability for 4K video recording. While the hardware on the device certainly supports it, it was kind of weird to find out that Xiaomi wasn’t including that feature out of the box. Nonetheless, once the update arrives on your device, you’ll be able to record videos in 4K resolution by opening the camera app in video mode, heading over to Settings -> Video quality, and selecting the 4K option.

The Xiaomi Redmi Note 5 Pro is one of the best mid-range budget smartphones that you can buy. While the device comes with all the bells and whistles, the above-mentioned list of features should help you make the most out of your device. However, do you think we missed out on a special trick that you were able to discover? Make sure to share it with us in the comments down below.