At a time when flagship smartphones are breaching the $1,000 mark, while adding less and less value with each new iteration, budget-friendly smartphones are getting cheaper and are offering more value for the money spent. Take the recently launched Honor 8X (starting at Rs. 14,999) for example – the smartphone features a very premium design and build quality with a massive 6.5-inch nearly bezel-less display and almost everything you’d expect (maybe even more) from a smartphone in this price range.

The latest smartphone from Honor has a lot going for it and it might as well be the next best budget mid-ranger. But in order to take that title, it’ll have to beat Xiaomi’s Redmi Note 5 Pro – the current reigning champion in this price bracket. Even though the Redmi Note 5 Pro is a bit dated, it still is great value for money and might possibly be among Xiaomi’s best selling smartphones in the country. So, in order to check if the Honor 8X has what it takes to be the next best budget-friendly mid-ranger, we put it up against the Redmi Note 5 Pro. Here’s what we found out:

Note: In order to keep the comparison as fair as possible, I’ll be using the 4/64GB variants of both the devices.

Now that we’ve got the specifications out of the way, let’s focus on the design and build quality of the two devices. The Honor 8X features a more modern design with glass on the front and back, with a metal chassis in between. In comparison, the Redmi Note 5 Pro has a slightly outdated design with a metal back and it looks a whole lot like several other smartphones from the company. On top of that, the Honor 8X also has a shimmery dual-tone color on the back that looks quite appealing. 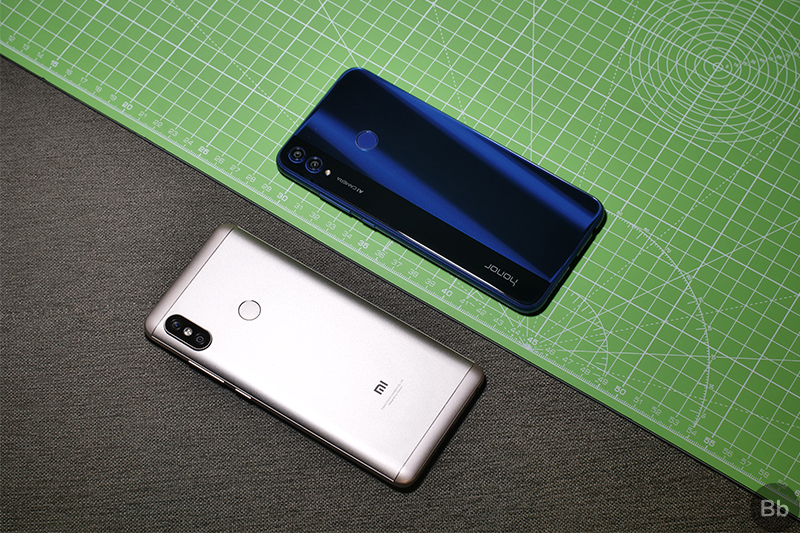 Both the devices have a dual camera setup placed on the top left corner of the back and a circular fingerprint scanner bang in the middle. Up front, while the Honor 8X packs in an impressive 6.5-inch nearly bezel-less display, the Redmi Note 5 Pro has a 5.99-inch display with relatively larger bezels on the top, bottom and sides. Even though the display on the Honor 8X has a notch, which I personally don’t prefer on any smartphone, I prefer the display on the Honor 8X over the one on the Redmi Note 5 Pro. 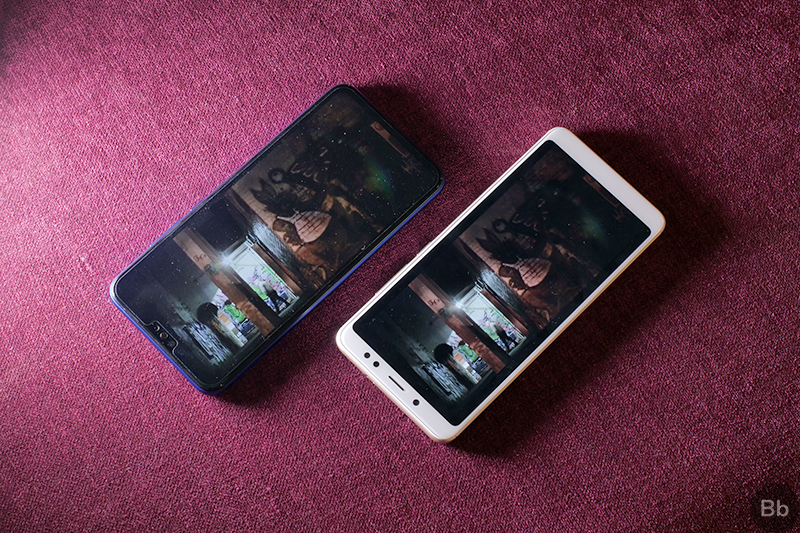 Both the devices feature the same ports and connectivity options, other than the fact that the Honor 8X features a triple slot SIM tray while the Redmi Note 5 Pro only has a dual slot SIM tray. Another point worth noting is that while the Honor 8X features Bluetooth 4.2, the Redmi Note 5 Pro features Bluetooth 5.0. These two factors level out the competition in terms of connectivity options.

As mentioned earlier, the Honor 8X features a 6.5-inch FHD+ nearly bezel-less notched IPS display, while the Redmi Note 5 Pro features a 5.99-inch FHD+ IPS display with slightly larger bezels and no notch. Individually, both the displays look pretty great, they get reasonably bright and they look quite vivid. However, when compared side-by-side, the Honor 8X’s display looks a whole lot better. 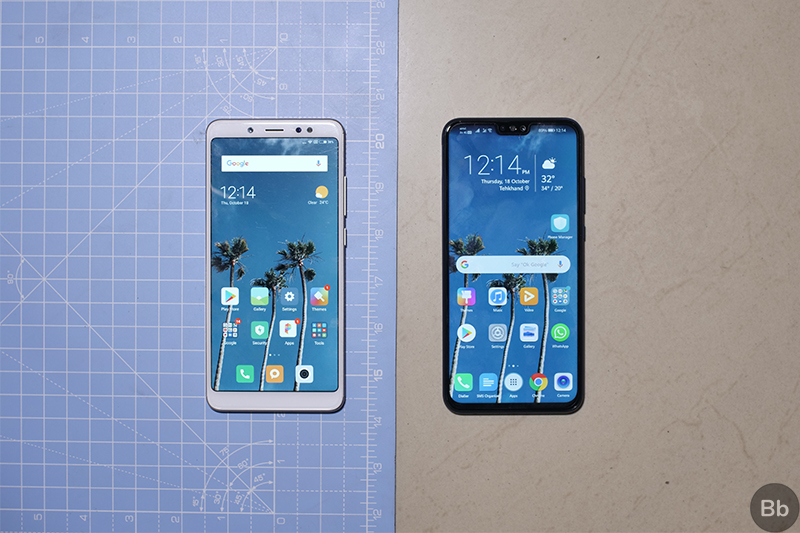 The display on the Honor 8X gets significantly brighter than the one on the Redmi Note 5 Pro, has better color accuracy and just looks quite pretty overall, thanks to the minimal bezels. I really enjoyed using the Honor 8X, predominantly because of its display, because it looks and feels so much more immersive.

Since the Honor 8X is a newer device it comes equipped with a more powerful Kirin 710 chipset from Huawei, while the Redmi Note 5 Pro features a Snapdragon 636 chipset. Both the devices manage to run the most demanding games at medium to low settings, but the Redmi Note 5 Pro tends to drop a couple of frames here and there when things get a little bit too aggressive. 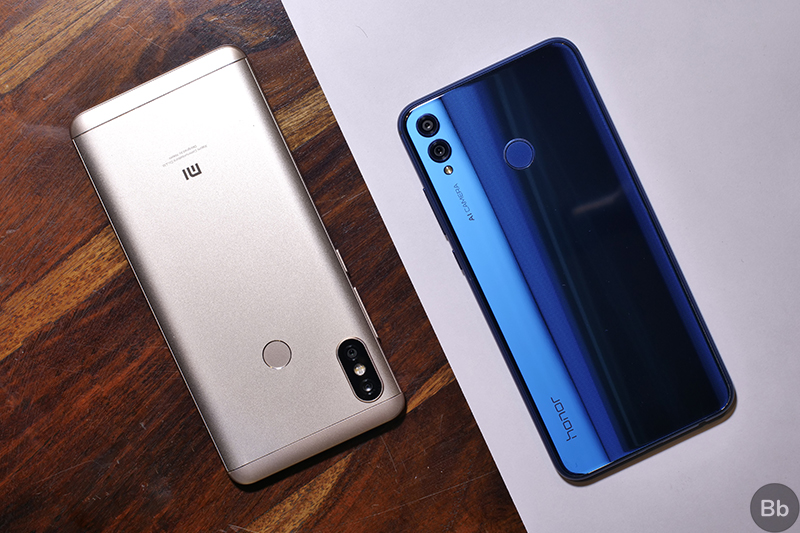 In terms of software, the Honor 8X runs EMUI 8.2 based on Android 8.1 Oreo, while the Redmi Note 5 Pro runs MIUI 10 also based on Android 8.1 Oreo. If you’re a fan of feature packed ROMs then you’ll probably like the software on both the devices. I personally don’t have any favorites, but if you’ve owned a Xiaomi or Honor device before, you might have some preferences. 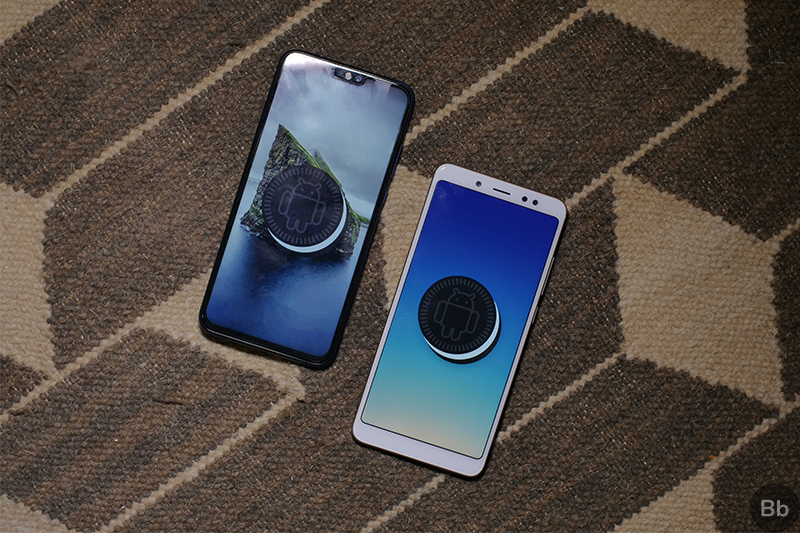 Both the ROMs are chock full to the brim with customization options and features. If you’re coming from stock Android, you might get overwhelmed by the Settings menu alone, thankfully both devices feature a Search option in the Settings menu to save you from any trouble. Both the ROMs also have very intuitive full-screen gestures that work the same.

Winner: Draw between the Honor 8X and the Redmi Note 5 Pro 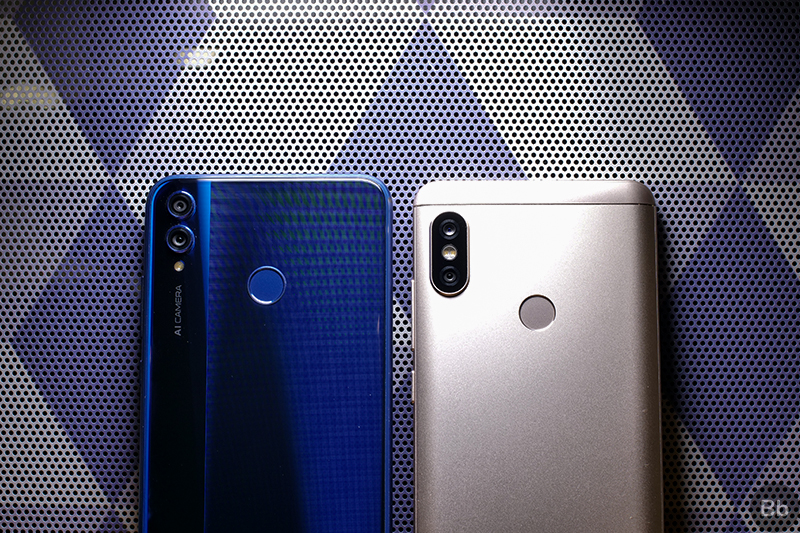 In good lighting conditions, the Redmi Note 5 Pro is able to consistently capture images with a greater amount of detail and better color accuracy. Just take a look at the sample images that we used for comparison:

In low lighting conditions, the Honor 8X performs even worse, struggling to focus on the subject and thereby delivering images that lack details and are full of noise. Here are some of the images we used for comparison:

Both the devices have a pretty capable portrait mode, thanks to the secondary 2MP and 5MP sensors. However, the Redmi Note 5 Pro still manages to click better portrait images than the Honor 8X. The images captured by the Redmi Note 5 Pro have better subject separation and a more natural looking background blur. Take a look at these sample images and see for yourself:

The Redmi Note 5 Pro also manages to click better selfies and portrait selfies, with greater details and better color accuracy. The Honor 8X just isn’t able to match the results. Here are a few images that we used for comparison: 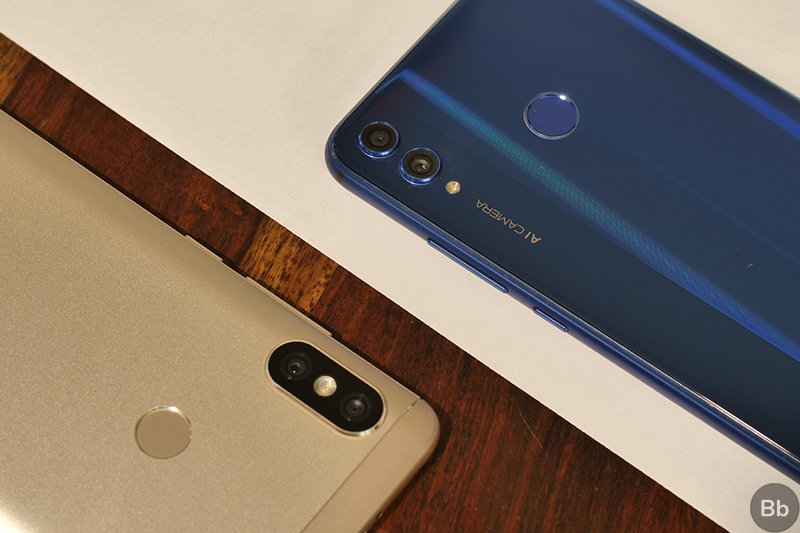 In my testing, the Honor 8X managed to deliver a screen-on-time of 5 hours and 50 minutes with heavy use, while the Redmi Note 5 Pro manages to deliver 5 hours and 20 minutes of screen-on-time with the same kind of usage. The Redmi Note 5 Pro and the Honor 8X go toe to toe when it comes to the charging speeds, with the Xiaomi device requiring just 10 minutes more to charge up to full since it has a larger battery.

It’s quite surprising that the Honor 8X, with its smaller battery, manages to last slightly longer than the Redmi Note 5 Pro.

Honor 8X vs Redmi Note 5 Pro: And The Winner Is?

Well, if you’ve been keeping track of the scores then you’d already know that the Honor 8X wins by quite a margin. The device offers a more premium design and build quality, a stunning display and slightly better performance. It also manages to keep up with the Redmi Note 5 Pro in terms of the software experience, however, the Honor 8X still manages to lose to the older device in the camera department. This brings me to the conclusion that even though the Honor 8X is now the best budget mid-ranger in the market today, it still might not be the go to choice for a number of buyers who prioritize the camera performance over everything else. For buyers who don’t use their smartphone’s camera as much, the Honor 8X is definitely the smartphone to go for in this price range.