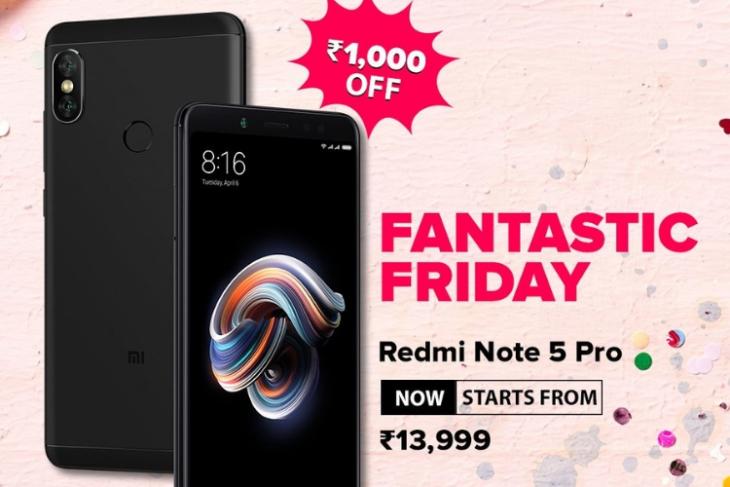 Xiaomi yesterday announced that it will be launching the much-awaited Redmi Note 6 Pro in India next week as part of its “#Super3” announcements. Well, the second big news of this series of announcements is in and you’d be pleasantly surprised to know that Xiaomi has slashed the price of some of its popular smartphones.

In an official tweet from Xiaomi’s Global VP and India head Manu Kumar Jain, the Chinese giant has now announced that it’s slashing the price of the Redmi Y2, Redmi Note 5 Pro, and the Mi A2 by Rs. 1,000. The price drop, Xiaomi says, is being extended to the customers to celebrate the company’s pole position in India’s smartphone market, as per the latest IDC report.

As you can see in the tweet above, the top-end 4GB+64GB variant of the Redmi Y2 will now be sold for Rs. 11,999. The Redmi Note 5 Pro, which will soon become outdated, is also being brought down to its original launch price and now starts at Rs 13,999. Xiaomi had increased its sale price post launch to compensate for the huge demand.

Also, the Mi A1 successor with no headphone jack, is now going to sell for Rs. 15,999 for the 4GB+64GB variant and Rs. 18,999 for the 6GB+128GB variant. This is an awesome deal for prospective customers, who may have skipped on buying a new device during a slew of sale events, of recent.

The best part is that the price cut is permanent!

While this is a great deal and Xiaomi may appear generous with the discounts it’s offering on the aforementioned devices, the company recently also hiked the prices of a few of its products including phones, Mi TVs and its popular Power Bank 2i. It did so to compensate for the increased input costs due to the depreciating rupee to dollar rate.

So, if you’re not into notches and want a mid-range Xiaomi smartphone, look no further and bag these popular phones at discounted prices.