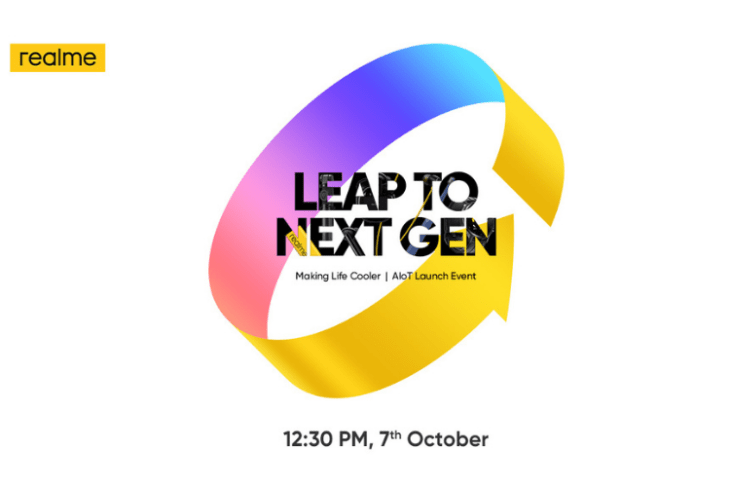 Just as Xiaomi is gearing up to bulk up its IoT portfolio with the launch of a new smart speaker, Mi Band 5, and Mi Watch Revolve in India, its arch-nemesis Realme has gone ahead with its announcement for an AIoT event in the country. The Chinese giant has decided to go head-to-head with Xiaomi by launching new audio, healthcare, and even wearable products in India.

Realme India CEO Madhav Sheth took to Twitter just a few minutes ago to reveal that Realme will hold the ‘Leap to Next Gen’ AIoT launch event on 7th October in India. He does not explicitly talk about any of the upcoming products. But, Flipkart and Realme’s official website have confirmed two of the devices. The image below also includes quite a few hints, so let’s dig in.

We have always been determined to introduce a new tech-lifestyle for the youth with our #TechTrendsetter products.

On 7th October we will take a step further to make your lives cooler and #LeapToNextGen.

Realme started talking up its 55-inch 4K SLED Realme Smart TV earlier last week. The company has now set up a dedicated microsite on Flipkart, confirming that the TV will launch on 7th October. The site details the new SLED display technology and does not reveal any new features of the upcoming smart TV. We do, however, get a first look at the 55-inch Realme Smart TV and you can check it out right here:

Also, the company has confirmed the launch of Realme 7i at this event via their official website. A dedicated landing page for this upcoming device, which was first unveiled in Indonesia a couple weeks ago. Realme 7i includes a 90Hz display, Snapdragon 662 SoC, a 64MP quad-camera array, a 5,000mAh battery, and more.

What more do we expect Realme to unveil at this IoT event? Well, if you take a closer look at the image above, you will see a new pair of TWS earbuds that we expect to be the much-awaited Realme Buds Air Pro (with noise cancellation). You can also see the Buds Wireless Pro and Watch S Pro, first teased at IFA 2020 earlier this month and leaked in multiple listings, a new electric toothbrush, and more.