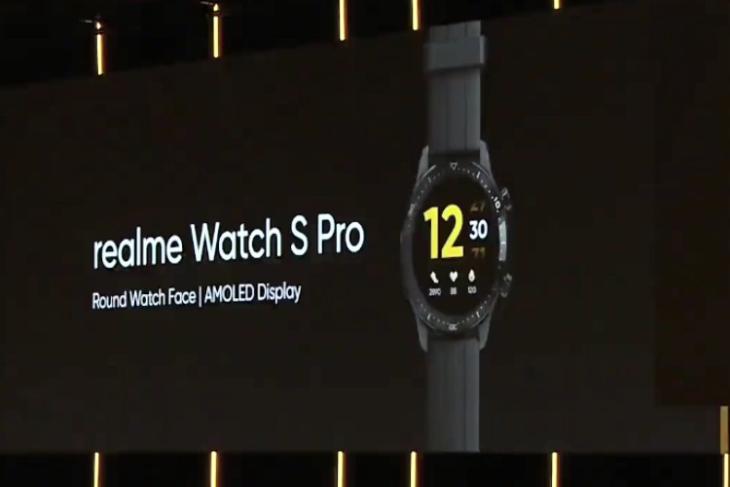 Realme showcased a myriad of upcoming IoT products at its first-ever IFA 2020 event. One of the most eye-grabbing products was the Realme Watch S Pro, with its Samsung Galaxy Watch-like circular design. Though the Chinese giant did not disclose anything about this smartwatch, except for that it will arrive in Q4 2020, we have today learned almost everything there is to know about the Realme Watch S Pro.

First spotted by MySmartPrice, the Realme Watch S Pro has been certified by the FCC today. It shows off live images of the watch, alongside the charging cradle and the user manual. The latter reveals all of the specs and features of this upcoming smartwatch. It also explains how to wear and use the watch properly.

This smartwatch will include a circular AMOLED display (more on this below) up top and a number of sensors and pogo pins for charging at the bottom. There’s a couple of buttons, protruding out from the right edge, of Realme Watch S Pro. They will enable you to control the smartwatch, which might be powered by Google’s Wear OS. You can also see the charging cradle for the watch in the image below (click to zoom in).

As you can see above, the live images not only show off the exterior but also give us an interior view of the Realme Watch S Pro. You can clearly see the PCB board, heart rate sensor, rotation motor, and the tiny battery. The straps can be detached from the body via the same mechanism as the original Realme Watch, which launched in India earlier this year.

Talking about the specs, Realme Watch S Pro will include a 1.39-inch AMOLED panel with a 454 X 454 resolution. It’s a circular touch display that looks pretty good in the render you see attached below. The smartwatch will have a heart rate sensor and an accelerometer to track steps, sleep patterns, calorie count, and heart rate. It will also support built-in GPS, GLONASS for connectivity, and a host of other sensors, such as gyroscope, ambient light sensor, and more.

The smartwatch will also come equipped with a 420mAh battery. It will connect to your smartphone over Bluetooth LE and sync data with the Realme Link app (iOS app under development). The software features appear to be pretty much the same as the existing Realme Watch. You will get app and call alerts, auto-exercise tracking, camera and music controls, and much more in tow.

There is currently no information on the price and availability of the Realme Watch S Pro. The Chinese giant has only confirmed that it will arrive in Q4 2020, which means we can expect a launch very soon. It will surely come to India as the elder sibling to the original Realme Watch, which was also its first attempt at making a smartwatch.