Personal messages require an extra layer of safeguard from the prying eyes. Though you can set up strong passcode or Face ID to prevent anyone (like your jealous sibling) from going into your device, there is always a fear that someone might get into messaging app and unravel your secret conversations. That’s why Facebook has introduced app lock for Facebook Messenger, having already rolled it out for WhatsApp Messenger long ago, to let you tighten up the security of your conversation threads. If an additional layer of defense for messages is on top of your mind, here is how you can lock Facebook Messenger with Face ID or Touch ID on your iPhone or iPad.

As the app lock has just been rolled out in Facebook Messenger, ensure that your device is running the latest version of the app. If you haven’t yet updated it, head over to the App Store -> Profile -> Messenger. Now, hit the Update button to update the messaging app. 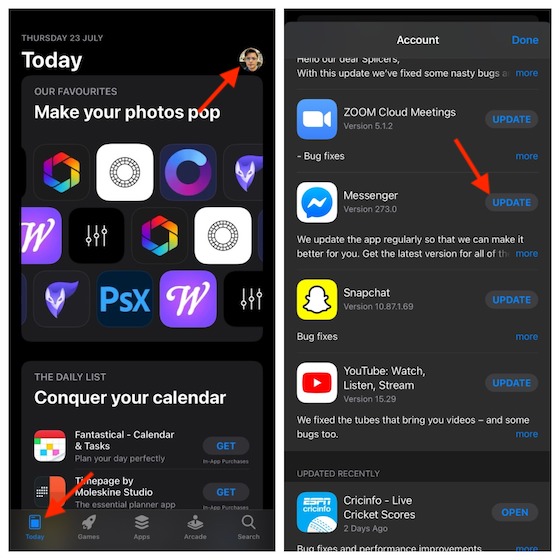 It’s worth noting that even when you have locked Facebook Messenger on your iOS or iPadOS device, you will still be able to reply to messages from notifications and answer calls.

What about the security of your Face ID or Touch ID information? Facebook Messenger states that it will neither transfer nor store your Face/Touch ID data. So, you should trust the Facebook-owned messaging app to keep your device protected. With that said, let’s get started with steps!

2. Now, tap on your profile at the top left corner of the screen.

5. Up next, turn on the switch for “Require Face ID/Touch” toggle.

Now, you may get a popup asking you to confirm the action, tap on OK.

6. Finally, select how soon you want the messaging app to lock after you leave it. There are four options to choose from:

By default, “After I leave Messenger” is selected. If you want to have enhanced protection, keep it selected.

From now onwards, the app will require Face/Touch ID or passcode whenever you open it.

Enable App Lock for Facebook Messenger on iPhone and iPad

So, that’s the quick way to enable app lock for Facebook Messenger on iOS and iPadOS. Facebook-owned messaging has recently added several useful features including the ability to share screen on a video call and dark mode. Besides, the handy features like the option to make payment make it a feature-packed app. What’s your thought about it and what are the improvements you still want to see in it? Make sure to send your points across.