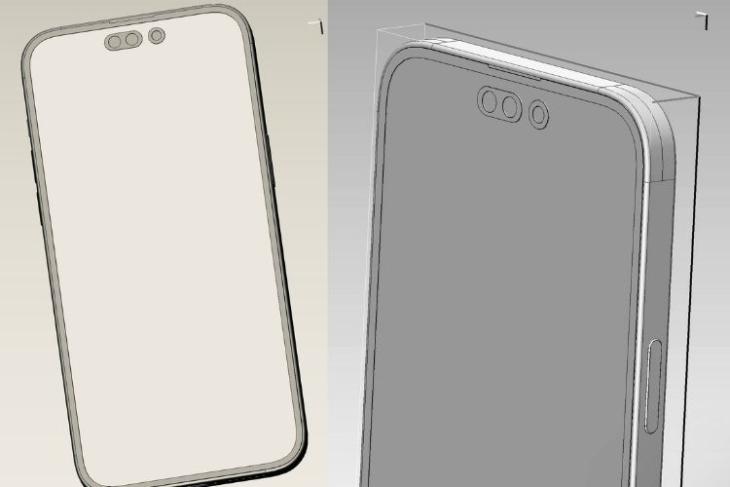 Apple will seemingly launch its next-gen iPhone 14 series later this year, rumors regarding which have been pouring in lately. After the leaked renders of the iPhone 14 Pro last month, we now have some official CAD renders of the Pro Max model, which provide a closer look at the form factor. Furthermore, the camera details of the device have leaked too. So, let’s check them out right now.

The latest iPhone 14 Pro Max CAD renders come from the reputable tipster ShrimpApplePro who recently took to Twitter to share a few images and measurement details of the device. As per the latest schematics of the iPhone 14 Pro Max, it will replace the infamous notch with a “hole + pill” design, which has also been repeatedly tipped previously.

The tipster revealed that the width of the pill-shaped cutout would be 7.15mm and the hole will have a 5.59mm diameter. The device is said to have a higher screen-to-body ratio than the current iPhone 13 Pro Max, thanks to the smaller 1.95mm bezels around the display. For those who don’t know, the iPhone 13 Pro Max has 2.42mm wide bezels.

It is also revealed that the iPhone 14 Pro Max would be thicker than the current flagship iPhone models because of an increased depth of 12.16mm, including the camera bump. This is a result of the thickened camera module, which increased from 3.60mm on the iPhone 13 Pro Max to 4.18mm on the upcoming model.

The thicker camera bump is said to be primarily due to the bigger 48MP camera with a 7P lens that will replace the current 12MP primary rear camera. According to another report on Weibo, the iPhone 14 Pro Max will come with a 1/1.3-inch sensor with 1.22-micron pixels. For reference, the iPhone 13 Pro Max’s 12MP camera comes with a 1/1.65-inch sensor with 1.9-micron pixels. Moreover, Apple will reportedly use pixel-binning technology for better low-light photography.

Other than these, previous rumors suggest that all the iPhone 14 models will come with a 120Hz ProMotion display and upgraded RAM. However, as per a report by noted Apple analyst Ming-Chi Kuo, only the iPhone 14 Pro, and the 14 Pro Max will feature Apple’s upcoming A16 Bionic chipset. The lower-end models, presumably the standard iPhone 14 and the iPhone 14 Max, will come with the current A15 Bionic processor.

iPhone 14 Pro Models Will Be the Only Ones to Include A16 Bionic Chip: Kuo