One of the many reasons why users prefer OnePlus devices is because of its stockish OxygenOS. However, there is a glaring omission from its launcher and that is the Google Feed access from the right swipe. Google Feed integration with the default launcher is a standard feature so users who move from a stock Android device hate to not have this feature– no matter how great the OnePlus Shelf is. Nevertheless, the wait is over as now you can get Google Feed on OnePlus launcher with a Magisk Module. You no longer have to use a third-party launcher to have Google Feed with a right swipe. Now having said that, let’s begin.

Get Google Feed on OnePlus Launcher

Before we begin, make sure your device is rooted with Magisk. In case, you have no idea about rooting, follow our tutorial here and root your OnePlus device. We are going to use a Magisk Module created by XDA Forums member ashishranjan738. The module contains the modded APK and it’s based on the latest OnePlus launcher. The modded APK comes with Google Feed support which can be enabled on the left shelf. However, keep in mind, with the module enabled, ‘double tap to lock’ does not work and causes some UI inconsistencies while in dark mode. Apart from that, the module is quite good and usable. Now that you have gone through the basics, let’s move to the steps.

Note: We have tested this module on the OnePlus 7T and it works quite well. While the developer has not explicitly mentioned that it will work on other OnePlus devices, you can still give it a try since OnePlus launcher is the same for all its devices.

1. First of all, open Play Store and disable updates for the OnePlus Launcher. It will make sure the upcoming updates won’t override the modded launcher.

2. Next, download the modded OnePlus Launcher ZIP file from here. If If you are unable to download the file on the desktop, try downloading it on your smartphone.

3. After that, open the Magisk app and head over to “Modules” by tapping on the hamburger menu.

4. Here, tap on the “+” button at the bottom and then select the downloaded ZIP file. 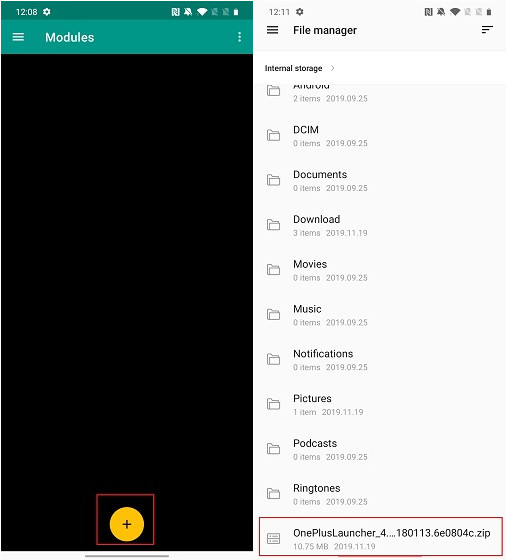 5. And voila, within seconds, the ZIP file will be flashed and will ask you to reboot the device.

6. Following that, open the launcher settings and go to the “Leftmost Screen” section. Here, select “Google app” and you are done.

7. Here is Google Feed in action on the OnePlus launcher.

Swipe Right on the OnePlus Launcher and Enjoy Google Feed

So that was our short guide on how to enable Google Feed on the OnePlus launcher. The steps are quite easy and straightforward so you won’t have much problem enabling it. However, you need root privileges so there is that. Anyway, that is all from us. If you are facing any problem installing the module, do let us know in the comment section below.