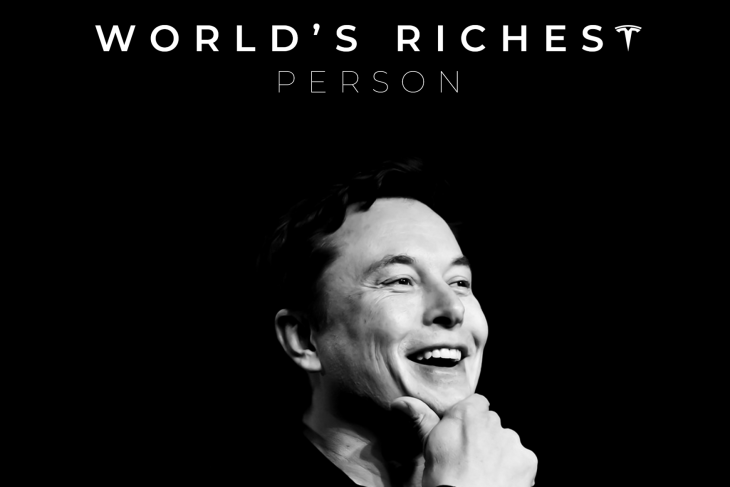 Right after knocking off Bill Gates from the second position, Elon Musk recently took the pole position from Jeff Bezos to become the richest person in the world. The genius yet crazy philanthropist climbed up to the top of the billionaire’s list after a massively profitable year for Tesla.

Just a month ago, Bloomberg reported that Musk claimed Bill Gates’ position in its Billionaire Index of 500 top billionaires to become the second richest in the world. The report stated that Musk’s net worth increased in an unprecedented way at the end of 2020 which placed him one step below the then-richest person in the world, Amazon CEO Jeff Bezos.

Prior to 2020, Musk was sitting way down on the list, somewhere near the mid-30s with a net worth of only $7.2 billion. However, in 2020, Musk added more than $100 billion to his net worth, mainly because of the success of both his companies, Tesla and SpaceX.

Reports show that Tesla alone produced more than 508,000 electric cars in 2020. The company met its EV production goal of 2020. This resulted in an increase in the stock price and Tesla’s inclusion in the S&P500 Index, which lists the stock exchanges of the 500 biggest companies in the US. Moreover, the company is planning further expansion by opening huge manufacturing plants and launching cars in other markets like India. It recently step foot in Nepal.

Musk’s space technology company, SpaceX also had a pretty decent year sending astronauts to the International Space Station and launching satellites for the Starlink Project. The company also started the beta program for its satellite-internet network, Starlink Broadband with speeds reaching up to 170 Mbps.

So now, our very own “Tony Stark” IRL, Elon Musk sits at the top of Bloomberg’s Billionaires Index with a net worth of $209 billion. That is around $23 billion more than the Amazon chief’s generous $186 billion. Although, it is worth mentioning that Bezos lost a chunk of his assets due to his recent divorce.

However, no matter how rich Musk gets, he will always be that CEO who sells boxers, flamethrowers, or hilariously named tequilas, which are also super-expensive!