In an effort to better compete with Reliance Jio, Bharti Airtel has increased the data benefits of its newly-revived postpaid plan worth Rs. 649 (plus taxes). The plans now offers 90GB of data alongside free voice and text benefits for a period of 30 days. When reintroduced last April, Airtel was only offering 50GB of monthly data alongside free unlimited voice and 100 text messages per day even on roaming.

The rest of the benefits remain unaltered, which means users will still get access to free Airtel TV, Wynk Music and Airtel Secure. There’s also one free ‘child’ connection that allows users to add a second number to share the benefits with. For many users, though, the most lucrative benefit seems to be the fact that the plan also comes with free 1-year Amazon Prime subscription that otherwise is an extra Rs. 999. 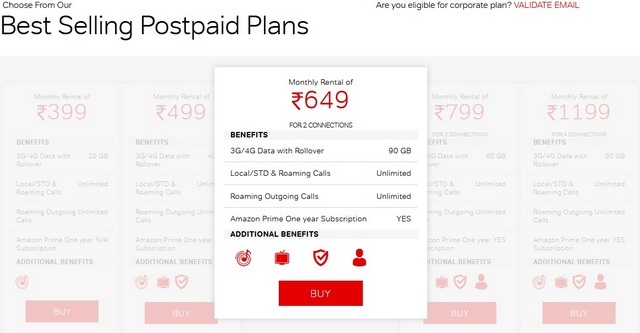 It is worth noting here that even as the RS. 649 plan has been changed to offer better value, the other plans seems to have remained unchanged. When we checked Airtel’s official site, the Rs. 399 and Rs. 499 plans were still advertising only 20GB and 40GB data, while strangely enough, the higher-priced Rs. 799 plan was still advertising just 60GB of data.

It’s interesting to see the effect Reliance Jio has had on the Indian telecom industry since its entry. While the Mukesh Ambani-led carrier has already transformed the prepaid segment beyond recognition, the company’s recent entry into the postpaid market is now forcing the incumbent operators like Airtel, Vodafone and Idea to start offering customers more bang for their buck. Now, Jio is bringing that same fight to the broadband market, and incumbents are already reacting with price drops even before the launch.