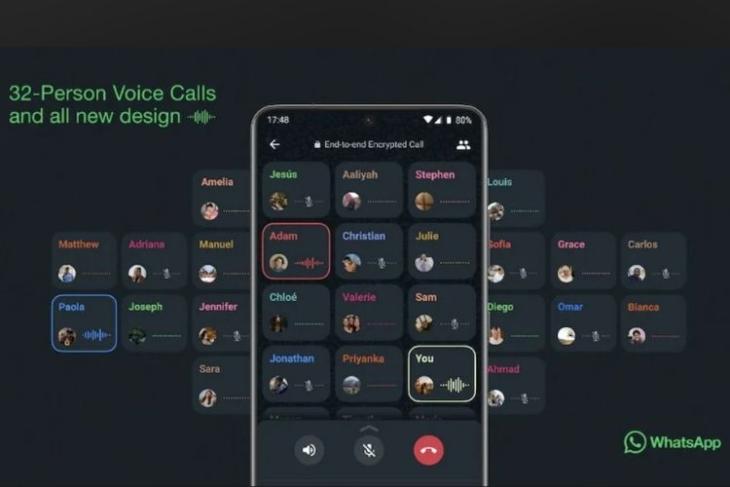 WhatsApp recently increased the group voice call limit along with the announcement of the new Communities feature. It has now officially rolled out the ability to add up to 32 users in a group voice call on Android and iOS. Also, the Meta-owned messaging giant has also added a brand new group call UI with features like speaker-highlight, waveforms, and more. Check out the details below.

WhatsApp has started rolling out the new 32-person group voice call along with the new user interface with the latest update on Android and iOS. On Android, users will require to update to WhatsApp v2.22.9.73, and iOS users will need to get v22.8.80 to access the new features. The App Store changelog also mentions updated designs for voice message bubbles along with other small improvements.

With the update, users will be able to add up to 32 participants in a group call to plan a grand party or conduct an important office meeting. To help users manage the massive group call, WhatsApp has also updated the group call UI with square-shaped blocks for each participant with their name, profile picture, and a waveform animation.

When users speak, their grid gets highlighted along with the waveform animation, similar to Microsoft Teams. For others who are not speaking, their grids remain without a highlight and a flat waveform. Additionally, users who mute their mics appear with a muted-mic icon.

With this feature, WhatsApp aims to push its Communities feature that lets users better organize and manage their group chats. The company is also working on a nifty polling feature for groups to further improve the group chat experience for users, which should also roll out widely soon.

This feature comes as a major upgrade to the previous group voice call limit of 8 people. Back in 2020, the company doubled the limit for users in a group voice call to 8 individuals. Last year, we saw WhatsApp add the ability for users to join in-progress group calls. So, what do you think about these new group call features on WhatsApp? Let us know your thoughts in the comments below, and stay tuned for more updates on upcoming WhatsApp features.