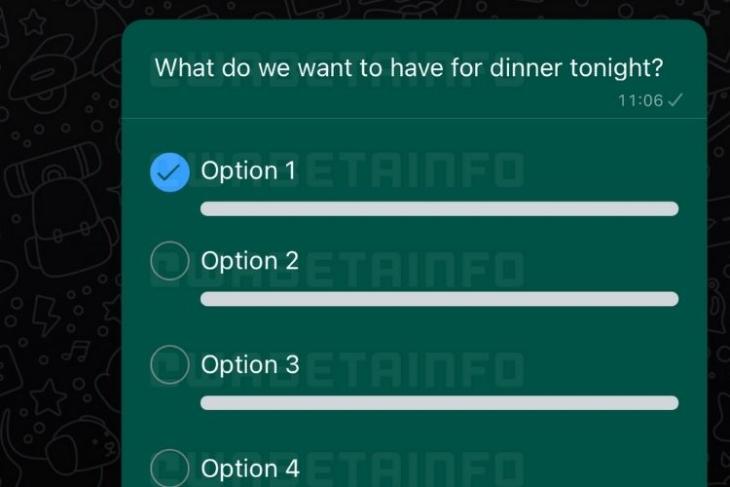 Earlier last month, we saw WhatsApp test the ability to conduct polls as part of the iOS beta version v2.22.6.70. At that time, we showed you a preview of creating a poll in a WhatsApp group. Now, with the latest iOS beta version of WhatsApp, we have a preview of what the group polling feature will look like. Check out the details below.

WhatsApp recently rolled out iOS beta version 22.9.0.70 and reputable WhatsApp beta tracker WABetaInfo has discovered, what looks like, the final user interface of a voting poll in a WhatsApp group. You can check it out in the screenshot right below.

So, as you can see, the group poll appears in a bigger-than-usual chat bubble, with the question at the top and the options below it. Users can select the checkbox beside the option they want to vote for and tap the “Vote” button at the bottom to confirm their choice. Once they confirm the vote, their answer will be added to the poll and sent to the other group members.

The ability to create vote-based questions in WhatsApp groups will help users easily make a decision for the group or acquire the opinion of group members on something. The polls feature on WhatsApp is similar to the voting polls feature on other social platforms like Instagram, Twitter, and Facebook.

Coming to the availability of the new group polls feature, WABetaInfo says that it isn’t available for beta users and WhatsApp needs to further refine the polls feature before rolling it out. As a result, it might take some time for the Meta-owned company to roll it out in the stable channel. However, we can expect more teasers like these ahead of its release. So, stay tuned, and let us know your thoughts on WhatsApp’s new group polls feature in the comments below.