Skip to content
Home How To What is ProRAW and How to Shoot RAW Photos on iPhone?

As expected, Apple has once again bet big on the pro-grade camera to make the high-end iPhones a lucrative choice for mobile photographers and photography enthusiasts. The triple camera system has received some notable improvements along with the addition of ProRAW for shooting DSLR likes shots. In this article, I’m going to talk about what is ProRAW and how you can shoot RAW photos on your iPhone. If you are willing to give a headstart to this all-new feature, now is the right time to get started.

If you are into photography, you may already be familiar with RAW. For those uninitiated, RAW is an image format that consists of minimally processed data. Shooting RAW means you are able to capture as many colors in an image as possible along with information like image pixels and metadata.

What is the Difference Between ProRAW and RAW?

In more ways than one, Apple ProRAW is different from RAW. For starters, ProRAW takes advantage of the multi-frame and computational photography technologies like Smart HDR as well as Deep Fusion and integrate them with the depth and flexibility of a RAW format.

Despite applying the computational photography technologies, ProRAW leaves plenty of room for editing crucial things like exposure, contrast, and color in the same depth that can be achieved with the RAW. And that’s exactly what separates ProRAW from RAW.

As ProRAW offers base processing, it becomes a tad easier to edit images. Thus, it proves to be quite handy in terms of photo editing. Unlike RAW images that require you to edit from the scratch, ProRAW ensures you don’t have to spend time dealing with some basic stuff.

At the October 13, “Hi, Speed” event, Apple stated that the ProRAW will be rolled out later this year. And true to its word, ProRAW has been released as a part of iOS 14.3 beta. It will be soon released to public in iOS 14.3 stable builds in coming weeks. To use it, go to Settings -> Camera -> Format, and enable the toggle for ProRAW.

As far as first impressions go, the ProRAW format does seem to be promising. We will delve into the matter when we have more time to test this new feature.

Whether you want to have more flexibility while shooting RAW images or wish to capture RAW photos even on your older iOS device, third-party camera apps are for you. Among several options, these are my favorite camera apps for taking RAW shots.

If you are on the lookout for a reliable free manual camera app that can let you shoot RAW images on your iPhone and iPad, give serious consideration to RAW+. While it may not be the most powerful camera app with a wide range of features, it has got all the bases covered to be a notable pick. 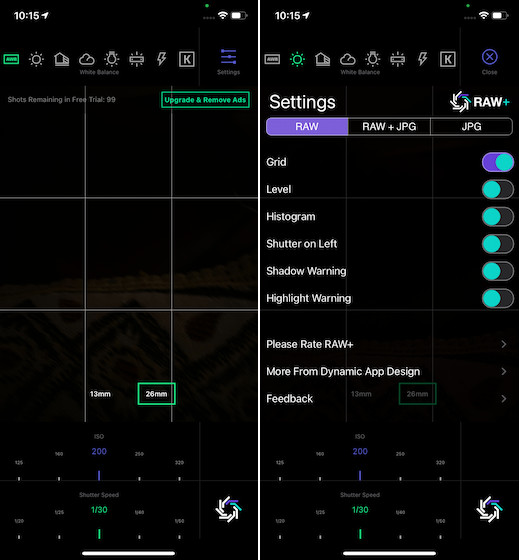 The app comes with 8 white balance presets including auto and custom kelvin which you can use to enhance the quality of your RAW photos. Featuring a simple interface, it allows quick access to shutter and ISO controls via the sliders. What’s more, RAW+ also has the support for RGB histogram and consists of a grid and level overlays as well.

To ensure you are able to snap better shots, RAW+ throws highlight and shadow clipping warnings. Thus, it would be a tad easier for you to snap impressive pics. Do note that the freemium version of this manual camera app can let you take only up to 100 shots for free. And if you want to remove this limitation, you will have to go for the pro version of the app.

Going by the wide-range of features, Halide Mark II is one of the best iPhone camera apps for shooting RAW photos. So, if you don’t mind spending a comparatively high price for a solid roster of pro camera features, it would be worth having at your disposal. 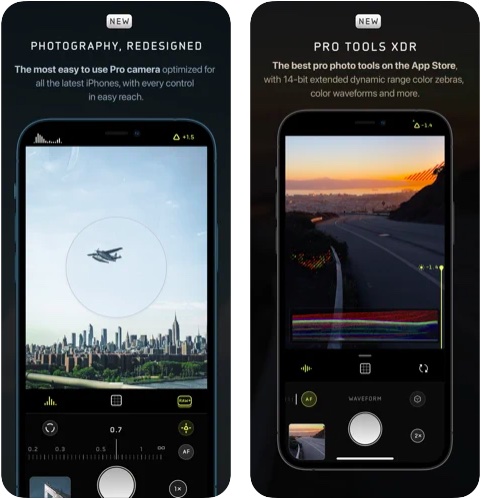 The app has a modern-looking interface packed with features like focus peaking and focus loupe. Moreover, it features Smart RAW that let you capture top-notch RAW shots by optimizing the settings. Thanks to the full manual exposure controls such as shutter speed, ISO, and white balance, it offers you the needed control to take impressive images.

Notably, Halide comes with a unique feature called “Coverage” that lets you take two photos with a small delay to capture both a maximum-Smart HDR processed image with Deep Fusion and Smart HDR along with DNG RAW. Besides, the exposure tools like histograms, XDR 14-bit RGB waveform, and color zebra stripes play a vital role in letting you capture high-quality RAW shots.

Both in terms of versatility and the knack to capture pro-grade shots, ProCam has long been a top bet. So, just in case you don’t want to settle with any below-par manual camera app, I would recommend you to try it out. 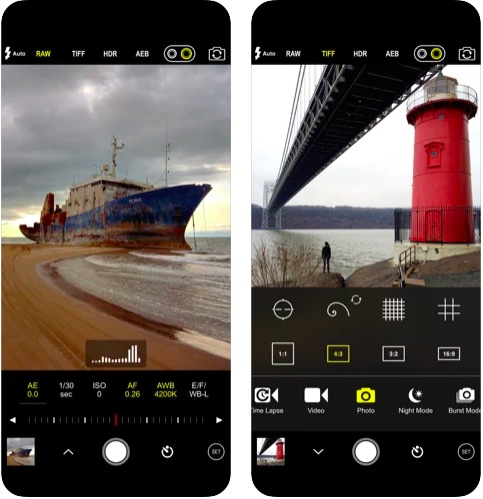 Probably the best part of ProCam 8 is a great set of manual controls. Whether it’s white balance controls, true focus peaking, or taking control of shutter speed, it has got you fully covered. Furthermore, it also provides overexposure warnings to keep you in check.

What has caught my attention in this app is the scroll and steppers system that takes a lot of inspiration from DSLR cameras. Besides, the AEB (auto exposure bracketing) with RAW support and the compatibility with lossless TIFF file format make it a complete camera app for iOS.

How to Capture RAW Photos on iPhone and iPad

In this guide, we are going to use RAW+ to capture RAW photos on the iPhone and iPad. The camera app is available for free and requires iOS 11 or later. So, make sure you have installed the app before getting started.

2. Now, fine-tune the camera settings as per your needs.

3. Once you have adjusted the camera settings, hit the shutter button to snap the RAW photo.

That’s all there is to it! So, that’s the way you can take RAW photos on the iPhone or iPad. Though it would be better if Apple makes ProRAW available even on the older yet capable iPhones like iPhone 11 Pro and Xs Max, third-party camera apps do a more than a decent job to fill up the void.

What do you think of Apple ProRAW and has it got enough to warrant an immediate attention from the professional photographers? It would be great to have your feedback in the comments section below.