Whether you want to test the performance of your phone, confirm the hardware configuration, or simply check if everything is working properly, there are apps on the Play Store that can help you get all the necessary info you need. Even if you are not specifically looking for a problem, it’s always a good practice to run a couple of tests and ensure everything is working as intended. Well, if you are looking for such applications, there are a few that will help you test and explore your phone’s hardware in the most simplified yet definitive manner. Here are the 8 best apps that can help you test hardware on Android.

Apps to Test Hardware on Android in 2020

Phone Doctor Plus by iDea Mobile Tech Inc. is a hardware testing app for Android that will give you an idea of your phone’s overall health. It’s loaded with features and it deserves a place in any list that mentions phone hardware testers. It offers 25 different tests and each works as good as any. The main screen will show you an overview of the tests completed under various heads like Outer Hardware, Sensors, Inner Hardware, and Wireless, and also the battery, storage, CPU and network information. 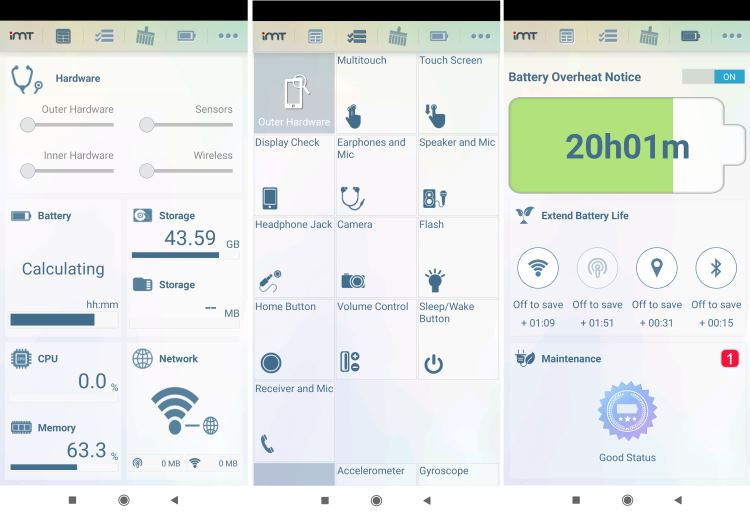 We recommend you use this app if you want an easy-to-use app to do a through test of hardware of your Android device. Also, unlike Phone Tester app, the Phone Docter Plus does not have any ads. So, be sure to check it out.

After Phone Doctor Plus, if I have to pick an app for a thorough hardware test on Android devices, I would choose the Phone Check and Test app without a second thought. Sure, Phone Doctor Plus has a better user interface and is more user-friendly, but Phone Check allows you to test the hardware extensively and monitor the hardware readings in the background. In terms of hardware test, you have a system-wide test where you have to just press the “Test” button and it inspects all the hardware components and functionalities. The series of tests include Cellular signal strength, WiFi, display, touchscreen, GPS, audio, camera, sensors, storage, memory, CPU, battery, NFC and more. 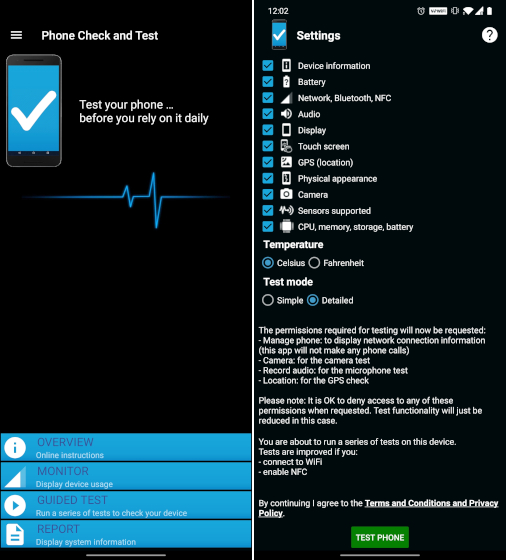 Apart from that, there is a comprehensive guided test where you can choose specific components and sensors for hardware testing. Having said all of that, what I love about this app is how quick it is in performing and reporting the tests. Furthermore, besides testing, this app also offers vast details about the hardware on your Android device. So you don’t have to install other apps like CPU-Z or AIDA64 for device information. Overall, Phone Check and Test is one of the best apps to test hardware on Android devices and if Phone Doctor Plus does not cut for you, this app will definitely stand up to your expectations.

TestM is another excellent app for testing hardware on Android devices, be it a smartphone or a tablet. Similar to other apps, TestM can examine the components and sensors through its series of 20+ complex tests. The app allows you to inspect the screen, sound, connectivity, motion sensors, camera, vibration motor, USB port and a lot more. Simply put, on the hardware front, TestM analyses every component and is compatible with more than 14,000 Android devices. 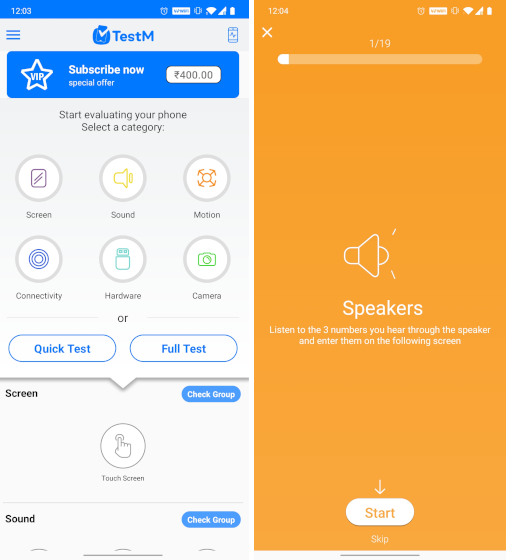 But that is not all, apart from testing, TesM also offers diagnostic services. You can run a range of troubleshooting steps to repair the issues you are having on your smartphone. However, if it’s a hardware-based issue, the app recommends some of the best repair shops near your location. It also gives you a hardware diagnostic report so you can provide the information to repair shops for a better understanding of the issue. All in all, TestM Hardware is a pretty good app and brings multiple features into one app– from hardware testing to diagnostic service– and you can surely rely on this app.

Test your Android app is a unique app in this list because not only you can test Android smartphones and tablets, but you can also test your Android Watch (WearOS). The app is also designed quite well in the material design language and seems quite straightforward. It offers almost 30 tests for various hardware components and sensors. Some of the tests include touch screen sensitivity, fingerprint, microphone, WiFi, GPS, CPU, Battery and more. However, Test your Android goes one step further from testing and brings a diagnostic mode to fix the dead pixels on the screen. While the developer does not guarantee the fix, users have reported that it works quite well. 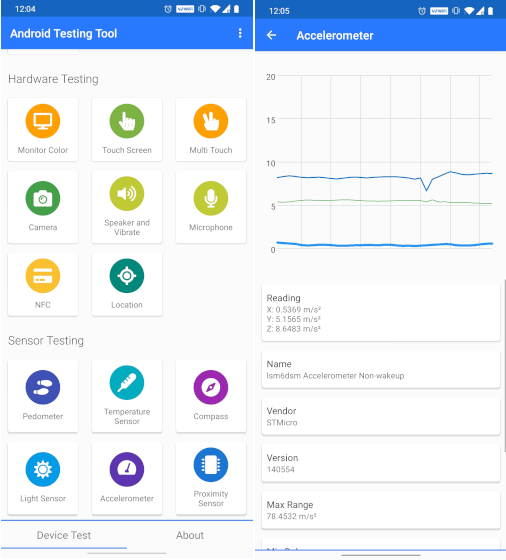 Further, Test Your Android app is specially optimized for select Android devices including devices from Samsung, Google, LG and Nokia among others. Apart from that, you get the usual ‘test, monitor and report’ bundled into this app so that is great. On top of it, there are few utilities too like barcode scanner and sound meter which can help you in some situations. So to put it straight, Test your Android app is among the best apps to test hardware with versatile features and you can definitely give it a shot.

If you want to quickly test the hardware on an Android device then I would recommend Test My Device app. It’s a super-quick app that offers individual tests and gets the result delivered in no time by checking if the hardware component is defective or not. However, some of its hardware tests are paid so keep that in mind. Talking about the range of tests, the app allows you to examine Bluetooth, GPS, Microphone, proximity sensor, battery, touch display sensitivity, and many other hardware elements. 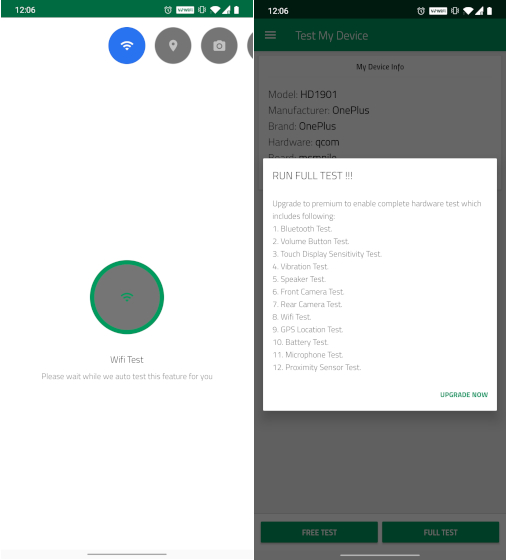 Other than that, the app gives you information like processor count, CPU and RAM usage, temperature and other device-related information. To conclude, Test My Device is a simple and quick app for testing hardware on Android devices and if other apps are unable to find the defective component then you can give Test My Device a try. 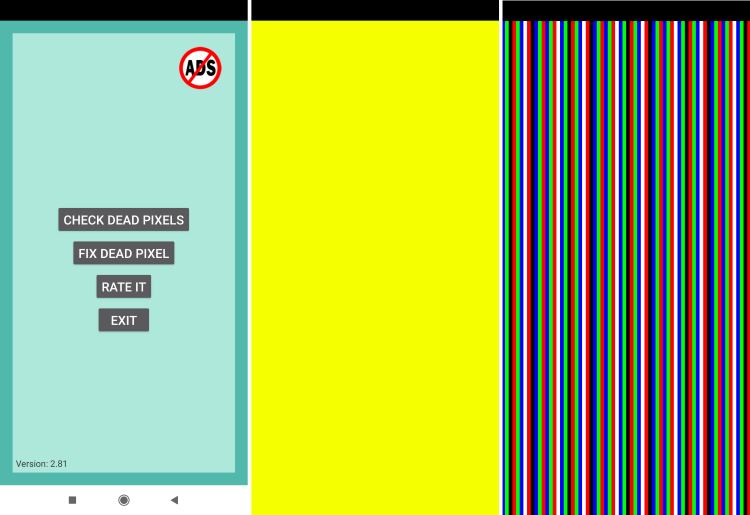 Dead Pixels Test and Fix app run a series of scans on your phone’s display to identify dead pixels. After identifying them, the dead pixels that can be brought back to life by refreshing them enough times through their three options (red, green, and blue). The app attempts to repair partial sub-pixel defects, stuck sub-pixels, dead pixels, dark and bright dot defects, and more.

Yes, the process takes quite a bit to finish, but the results are pretty promising. Some stuck pixels that are caused due to hardware defects, however, can’t be fixed by any apps, and you’ll have to get the display replaced in such cases. If you are looking for an app that can test the display hardware on Android, this is the app to get. 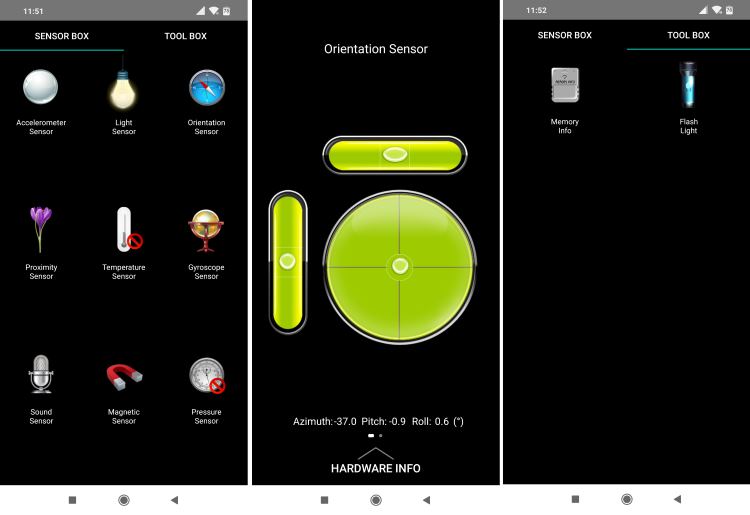 Apart from the sensor tests, however, Sensor Box doesn’t offer much. There’s a separate tab called Tool Box that lets you check your memory info and test the flashlight. Yes, it’s not a lot, but given the fact that it is a dedicated app for sensors, this one deserved a place on our list.

With over 5 million downloads on the Google Play Store, AccuBattery is a simple app that monitors and optimizes battery health and its performance. This is one of the must-have apps if you are using an old smartphone and its battery has started degrading. 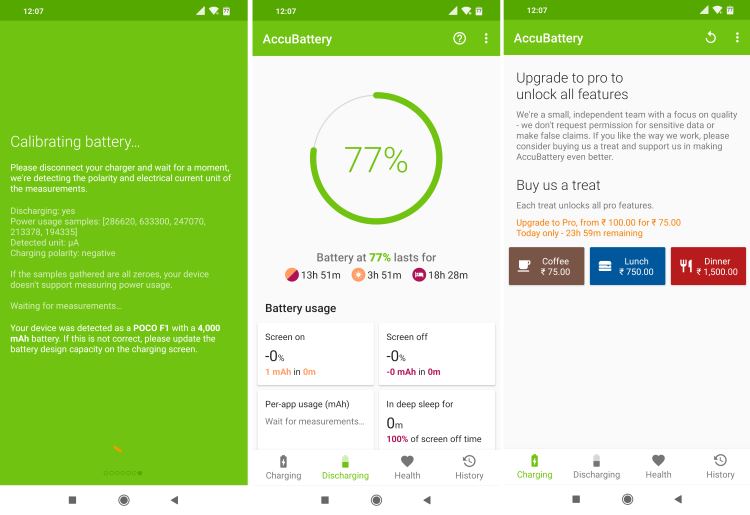 AccuBattery performs a series of battery health checks in an attempt to figure out the health of your battery. It shows some useful information such as the current battery capacity and lets you compare it with the intended capacity thereby allowing you to measure the level of wear. AccuBattery also shows some other useful info like discharge speed, consumption per app, and more.

There’s also a Pro version of AccuBattery, and it adds some useful info such as Dark mode, detailed battery statistics, historical sessions, and more. It also removes ads from the app, so you might want to take a look at the Pro version as well.

Apps To Check out Hardware Info

If you are not interested in running any fancy tests and are just looking for an app to check out the hardware info, then we’ve got some apps for that as well. These apps are not meant to test hardware on Android, rather they are used for extracting your device’s information on system, battery, CPU etc. There are a number of apps that promise to do so. Here are some of our favorites: 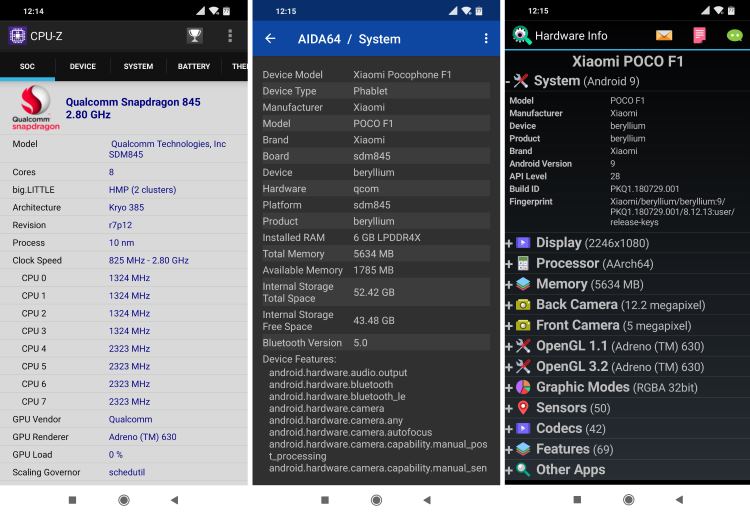 Which Apps Do You Use to Test Hardware on Android?

Well, those were some of the apps that you can use the next time you need to test hardware on Android. You can also use these apps if you feel like your phone is behaving out of the ordinary. Most of the functions in each app should work easily on any android device, but some advanced tests like temperature, gravity, pressure etc. may not work due to inadequate hardware support.

Also if you like this article, don’t forget to check our article on stress-testing CPU, GPU, and RAM of your Windows, Mac, and Linux devices. Do let us know some of your favorite apps for testing the hardware of your device. We’d love to check them out and hopefully add them to the list as well.