Beebom
Home Internet What Song Is This? 10 Mobile And Web Apps to Identify Songs

Have you ever been in a situation where you happen to hear a song you like, but there is absolutely no way to figure out which song it is? I’m sure you have. It happens to us all, and that nagging feeling of “what song is this?” just doesn’t seem to let go, does it? Well, if you’ve been in such a situation, or if you find yourself in this situation too often, we have your back. Here are 10 mobile and web apps to identify songs:

Siri is slowly (but surely) increasing in its capabilities, and it can integrate with a lot of great third party apps. One of the really cool things that you can do with Siri, is use it to recognize music, and identify songs. When you hear a song you want to identify, you can simply launch Siri, and say “What song is playing right now?“, or “Name that song“, or “Which song is this?“. Siri will then listen to the song that is playing, and tell you the name of the song. 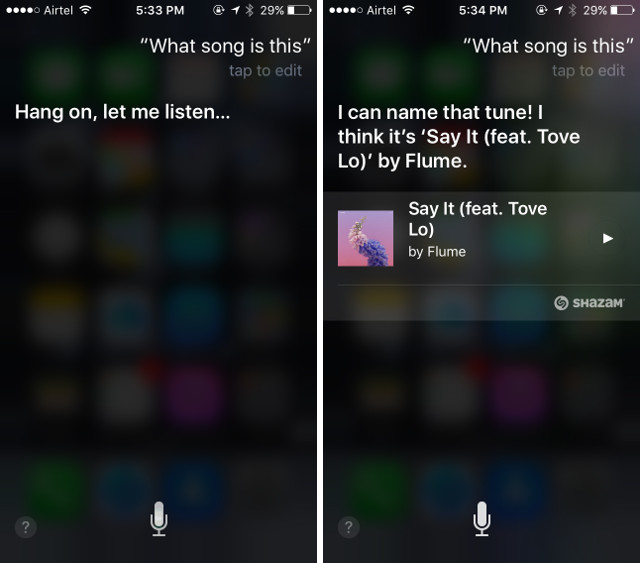 You can even tap on the result to view the song in Apple Music, and play it if you’ve subscribed to the music streaming service. If you’re not an Apple Music subscriber, you will get the option to purchase the song, or listen to a sample.

If you’re an Android user, you can use the built in virtual assistant, Google Now, to recognize songs playing around you. You can simply launch Google Now, and say “What song is this“, “What is this song“, or “Name this song“, and Google Now will listen to it for a while, and present you with the results. 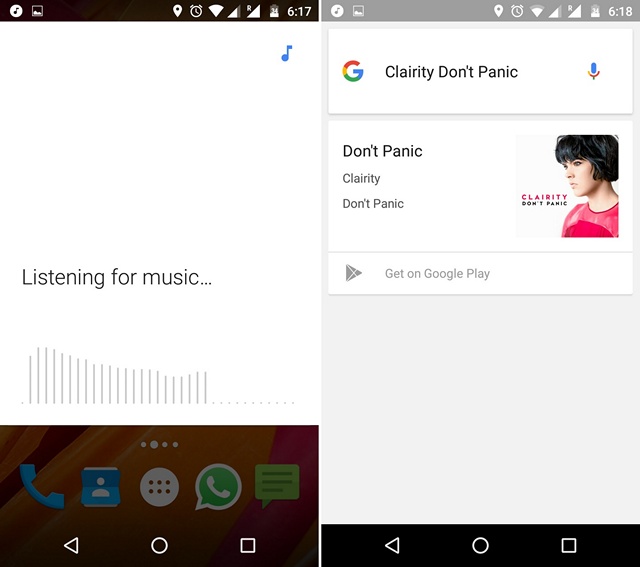 Note: Unfortunately Google Now doesn’t seem to support this feature in India, yet, but we can confirm that it does, in fact, work in countries like the USA.

If you’re a part of the small group of people using Windows phones, you can use Cortana to recognize music as well. Cortana is no slouch when it comes to identifying songs, and you can simply ask it “What song is playing?“, or a similar question, and it will identify the song for you. This feature is also available on Windows PCs, so you don’t need to install song recognition apps on your Windows devices. 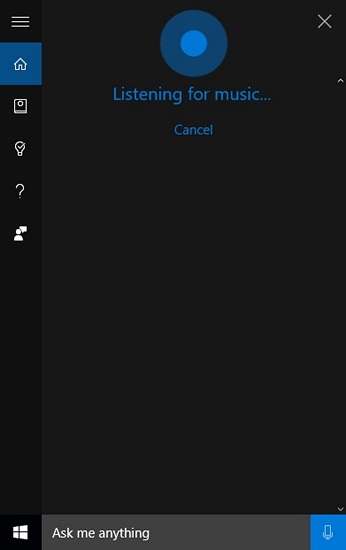 Note: The Cortana app on iOS, and Android does not have this feature.

Shazam is one of the most popular apps when it comes to music recognition. The app is available on Android, iOS, and Windows devices, and it works very well. In fact, even Siri uses the Shazam database to identify songs. With Shazam, you can easily identify music around you, find a song, and even get lyrics so you can sing along. 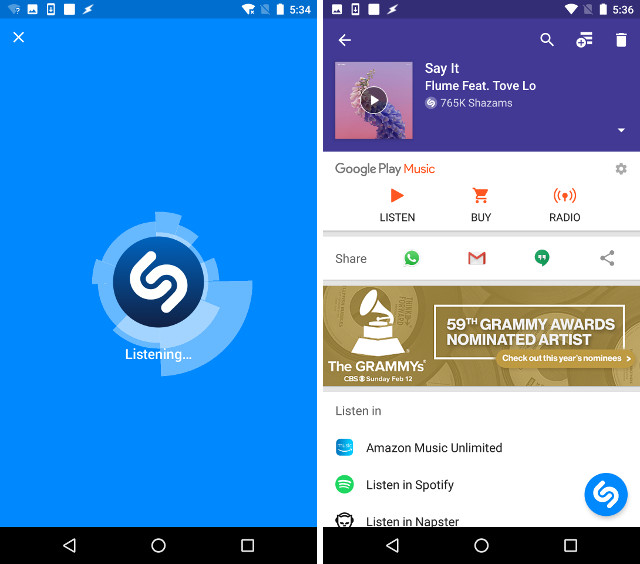 If you don’t want to use Siri, Google Now, or Cortana to find out what song is playing around you, Shazam is probably the best app you can use. What’s more, Shazam even remembers the recognized songs, and it can even work when you’re offline. So no matter whether you have data connection or not, you will never be left wondering “what song is this?”.

SoundHound is another really great app when it comes to music recognition, or identifying songs. One area where SoundHound is much better than Shazam, is that you can even hum tunes to find a song. The app works very well, even if you’re only humming a part of the song you want to recognize. This is extremely helpful, when you don’t remember the lyrics for the song, and it’s just a song you remember the tune to. Simply launch SoundHound, and hum the tune to it. It really works very well, and can identify songs you hum, almost every time, which is pretty great. 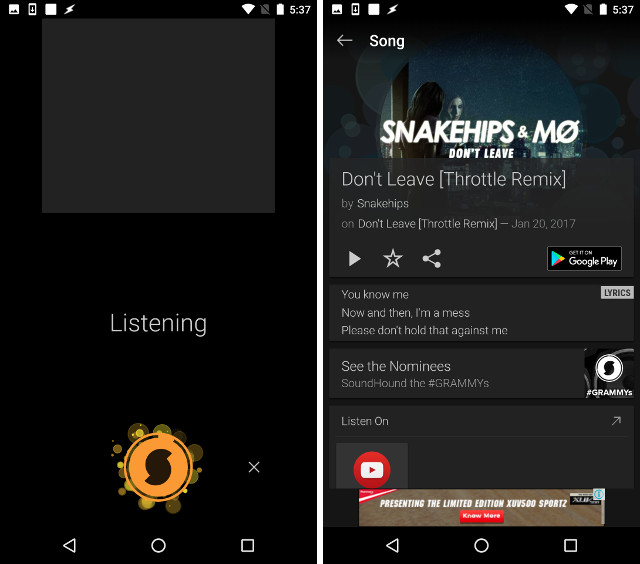 SoundHound is as fast as Shazam is, when it comes to identifying songs, and is an awesome music recognition app. 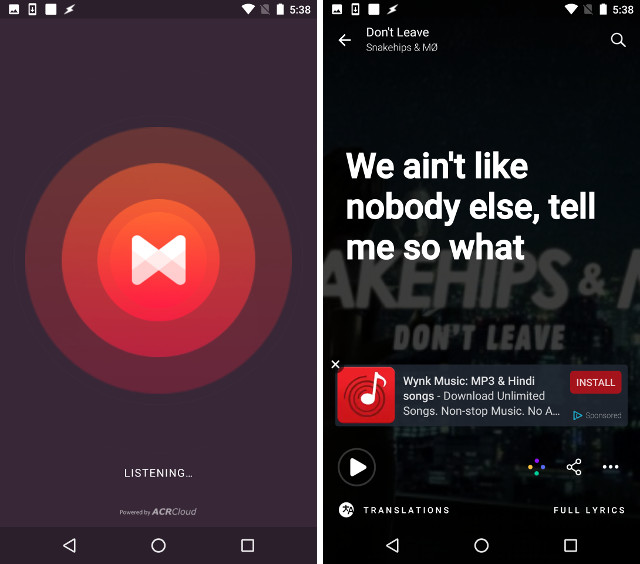 MusicID is yet another song recognition app you can use to figure out what song is playing around you. The app, especially the first time I launched it, didn’t seem to wanna start listening, let alone recognize songs. However, once the “listen at start” option was enabled, the app worked perfectly fine. You can simply launch the app, and it starts trying to recognize songs playing around you. 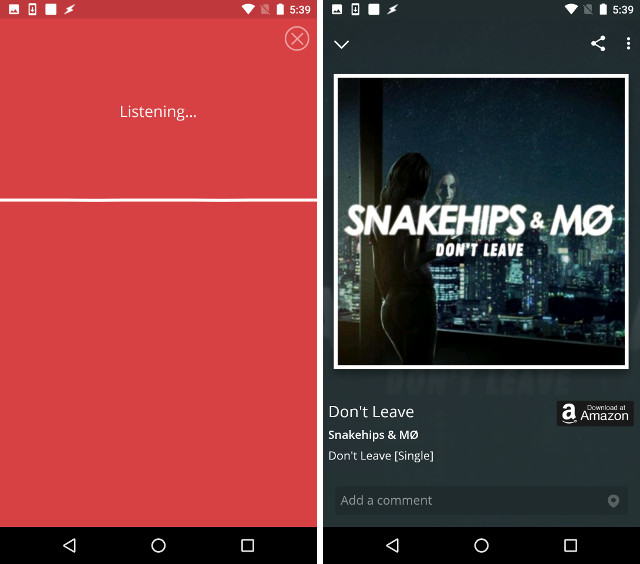 Once the app figures out what song is playing, it shows the result, and even saves the search in the app, so you can go through it later. The recognized songs are saved in the “Profile” section of the app, which is visible on the home page itself. Tapping on the saved songs, brings up a number of other songs that are similar to the one the app recognised, along with a link to buy the song on Amazon.

TrackID is a music identifier, and song recognition app from Sony. The music recognition app is developed by Sony, and powered by Gracenote, and it works very well. It can recognize music playing around you fast enough, and give you the results. The song recognition is usually on point. Everytime TrackID recognize songs, it displays the result, and also saves in the “History” tab in the home page of the app. 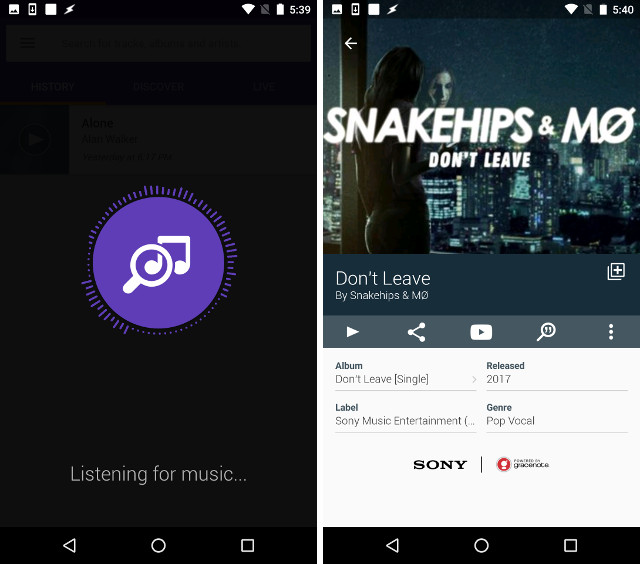 Along with the “History” tab, the app also comes with two other tabs:

Genius is another song finder app you can use to recognize music playing around you. The app opens up at the home screen, where you’ll be shown a list of songs that are the most identified songs on Genius. You can tap on any of these songs, to see their lyrics, and to play them, if you want. The app also gives you the option to download the lyrics, or share the song with someone else. 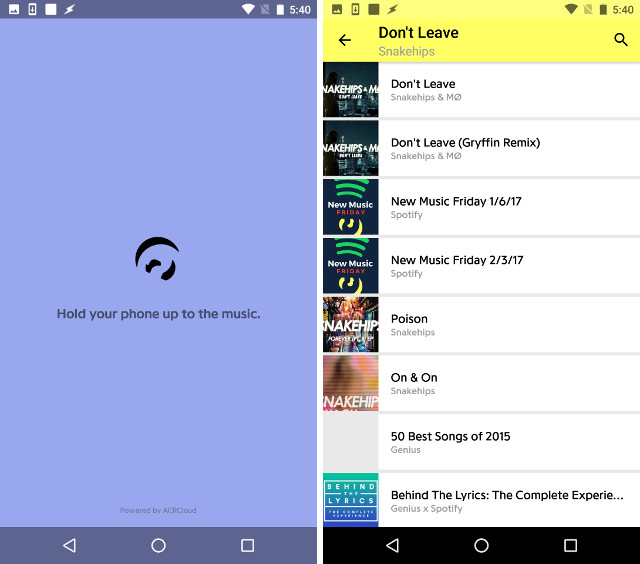 There is also a floating button for identifying music in the bottom right of the app. You can simply tap on it to get the app to recognize songs, or you can tap on the hamburger menu icon, and tap on identify songs to figure out what song is playing. The app works well, but unlike other apps like Shazam, and TrackID, it doesn’t save the songs you’ve identified with the app. So, if that’s a feature you have to have, then Genius is not for you.

Midomi is a song detector website you can use to identify music simply by humming, or whistling the tune into your laptop mic. This can come in especially handy if you have a tune stuck in your head, but you can’t place a name to it. Simply launch the Midomi website, and hum the tune; the website will recognize the music, and name that song.

The website also works if you use it when the song is actually playing around you, so you don’t necessarily have to hum or whistle the tune. Midomi takes its sweet time to recognise music, but it does work.

Use these Methods to Identify Songs

You can use any of the 10 methods mentioned in this article to identify music playing around you. Even if you just have a tune stuck in your head, some of the song recognition apps mentioned are capable of identifying songs even if you just hum the tune. Plus, if you use virtual assistants like Siri, Google Now, or Cortana, you wouldn’t need any music recognition app on your phone, which is definitely a good thing. If you’d rather use online song recognition, websites like Midomi can easily recognize music for you.

As always, we’d like to know your thoughts about music recognition apps and song recognition websites. Also, if you know of any other method to identify music, do let us know about them in the comments section below.

When it comes to customising and personalising your Apple Watch, the watch face you set on the display is of paramount importance. It should...
Akshay Gangwar - Apr 7, 2020

OnePlus 8 and 8 Pro Rumor Roundup: All You Need to Know Ahead of...

Even though the whole world is currently battling the COVID-19 pandemic, OnePlus has started gearing up to launch its upcoming OnePlus 8 flagship series...
Anmol Sachdeva - Apr 4, 2020

As the Coronavirus pandemic spread through the world, nation after nation went into lockdown mode trying to flatten the curve of the virus' infections....
Akshay Gangwar - Mar 31, 2020

After pushing back the launch date thrice due to the ongoing COVID-19 pandemic, as revealed by CEO Pete Lau, OnePlus has decided to move...
Anmol Sachdeva - Mar 30, 2020