If you have built a new PC, stress testing the CPU is the first thing you should do. It helps you find the faulty hardware and allows you to test your machine’s capability before throwing it into a mix of intensive tasks. Many people call it a torture test, and rightly so, given that it really pushes every hardware component to its absolute limit. If you are new to this world, well, I have brought a comprehensive list of tools to stress test CPU. Apart from that, I have also shared some benchmarking tools in case you just want to compare your PC’s performance with other computers. So without further ado, let’s go through the article and learn about the CPU stress test in detail.

In this article, we have included 5 stress test tools and 5 benchmarking programs. If you are well aware of computer hardware then you can stress test your CPU by overclocking and generating heavy loads on the components. However, in case you just want to check your computer’s performance and how it ranks up with other similar devices then go with the benchmarking tools mentioned in the second section. Now having said that, let’s get started.

OCCT is one of the best tools for stress testing CPU and various hardware components. It’s designed especially for professionals, but you can also use it if you have an in-depth understanding of PC components. OCCT allows you to run several heavy tests on your CPU making sure all the cores are being used to their full capacity. Besides that, it also detects hardware glitches if a component is not performing on expected lines. The best part about OCCT is that you also get a monitoring engine that displays the temperature of your CPU, voltages, fan speed, frequencies and more. The data is accompanied by lucid graphs so you can comprehend the nitty-gritty easily. All in all, if you are looking to stress test your CPU for checking hardware errors then OCCT is a one-stop solution for you. More so, if you are using it on your personal computer then the program is completely free. 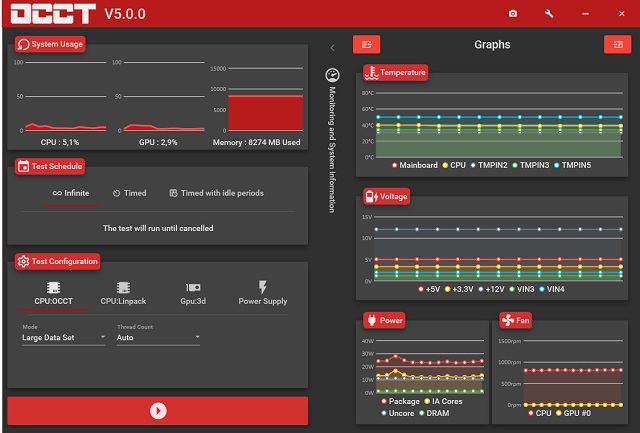 Check Out OCCT (Free for personal use, Starts at $1 per month)

Prime95 is another great software for stress testing CPU under an extreme workload. In fact, many professionals rely on Prime95 because of its holistic approach to testing hardware components. If you are a system builder or one of those people who love to overclock CPU then Prime95 will let you test the stability of your machine flawlessly. To talk about its approach, Prime95 heavily tests the CPU using the processor’s integer and floating-point instructions. It supplies a consistent workload to the CPU and exceeds the limit once the machine gains some stability. Having said that, the best part about Prime95 is that it’s completely free and available on all major platforms including macOS and Linux. So, if you want to test the limit of your CPU to the point it tortures every component of your CPU, well, Prime95 is the tool you should go for. 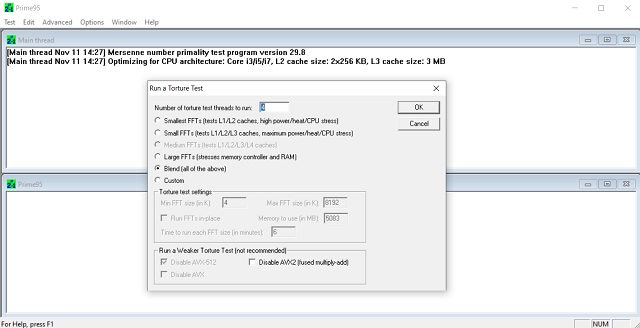 AIDA64 Extreme is more of a hardware information program than a stress test tool. However, it does come with a hardware detection engine that offers plenty of heavy load tests and diagnostic functions. For starters, you can overclock your CPU and run intensive workloads to stress test the components. It deploys a 64-bit multi-threaded testing module to push your computers to its extreme limit. At the same time, you can accurately check voltage, power consumption by different components, fan speed readings, and other parameters. Besides that, it also lets you compare to other CPUs to gauge your PC performance using its online database. As I said, AIDA64 Extreme is more focussed on providing information and that’s why it’s a great stress testing tool for general consumers. You can definitely take a look at AIDA64 Extreme if OCCT and Prime95 are too complex for you. 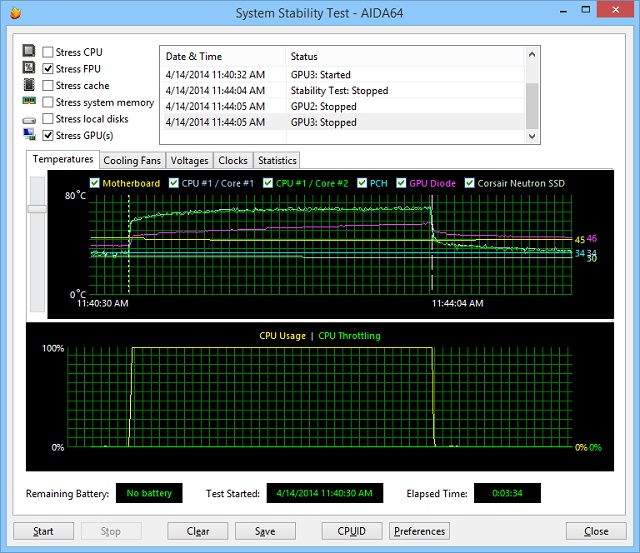 HeavyLoad is one of the most popular tools for stress testing CPU on Windows machines. It’s a light application that is not as technically complex as OCCT and the suchlike, but it surely offers extreme tests with a limited set of features. It uses simulated tasks to put the CPU under heavy stress and test its reliability. You can also choose your own tasks, allocate limited memory, select specific cores to find how your machine reacts under different scenarios. Apart from that, you can also restrict the disk space and write speed to check how your PC behaves when the hard disk reaches its limit. And for ease of understanding the performance metrics, it offers a simple graph of CPU usage on the dashboard. So, if you are looking for a simple software for stress testing CPU then HeavyLoad can be a great pick. 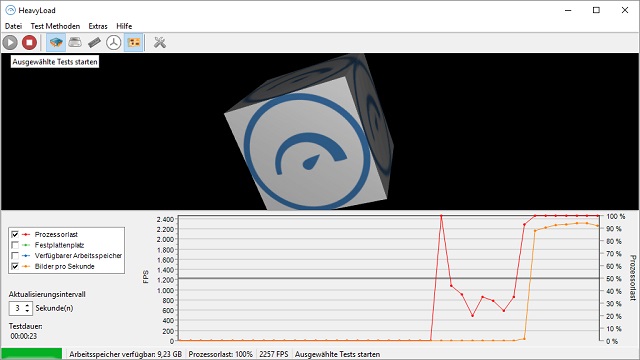 If you are a Linux user and want to stress test your CPU then you don’t have to rely on third-party programs. Most of the Linux-based distributions including Debian and Mint support this tool and can be installed within seconds. Just open the Terminal and hit this command to install the Stress tool: $ sudo apt-get install stress. You can now stress test your CPU and also define various parameters such as timeout time, CPU frequency, cache thrashing and more. If you want to learn more about the arguments and parameters then you can head over to this explainer.

Here, we will list 5 programs that reviewers use for gauging the performance of most computers. However, keep in mind, these are mostly benchmarking programs rather than a true CPU stress testing tool. It allows you to perform extensive tasks and put a massive workload on the CPU to measure your computer’s performance. You can further compare your PC score with other machines to find where your PC build ranks. Now having said that, let’s begin.

PCMark 10 is the most powerful benchmarking tool which offers plenty of workload and simulated tests. It runs a number of performance tests that reflect the use case of professionals and average users combined. The best part about PCMark 10 is that unlike OCCT and other similar programs, here you don’t have to configure anything. All you have to do is install the program and click a button to run a multitude of stress tests on CPU. The tests are designed in such a way that it uses all the cores of the CPU and brings the best performance out of the given hardware. Further, you can find your comprehensive score and compare it with other computers. Simply put, if you don’t have much expertise on CPU and hardware components then PCMark 10 can help you gauge your computer’s performance easily. 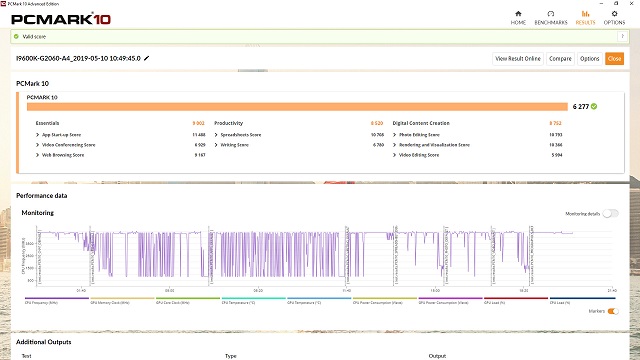 PassMark offers a performance test application for benchmarking PCs with a standard PassMark rating. It uses a series of CPU stress tests including hyper-threading, complex mathematical calculations, 3D simulation, encryption, and physics modeling. These are some intensive tasks that require massive resources and bring the CPU cores to its knees. PassMark claims that it accurately quantifies the PC hardware and you can compare it with other similar devices from its database. Along with that, it also offers some hardware upgrade recommendations which can significantly improve your performance for cheap. So, if you want to check where your PC stands among the legion of computers, PassMark can be a great alternative to PCMark 10. 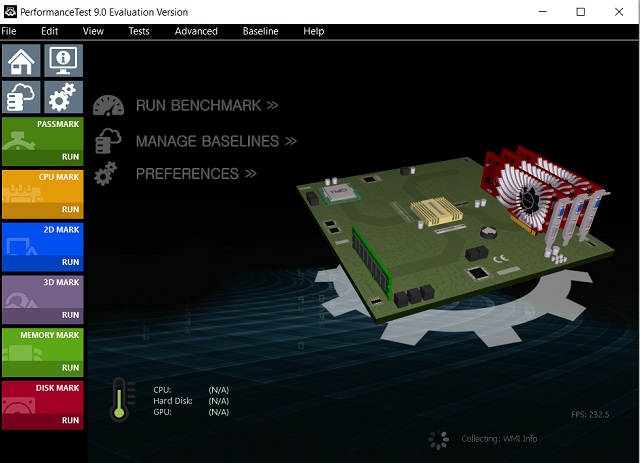 Check Out PassMark (Free Trial for 30-days, One-time purchase of $29)

Geekbench is a popular benchmarking tool that stress tests your CPU and offers single-core and multi-core scores for you to comprehensively judge your computer’s ability. It simulates multiple intensive tasks that we use in our daily life with a dose of Augmented reality applications and Machine Learning operations to find your CPU’s peak performance. AR and ML are the latest additions to Geekbench 5 to test how future-proof your device really is. Other than that, it also tests the CPU by heavy gaming, image processing, and video editing of higher-resolution footage. All these tasks push the CPU to its absolute brink and that’s where the Geekbench score is determined. So, if you want a comprehensive score for your CPU which can be compared to other devices– no matter if it’s running Windows, macOS or Linux then Geekbench is a solid choice bar none. 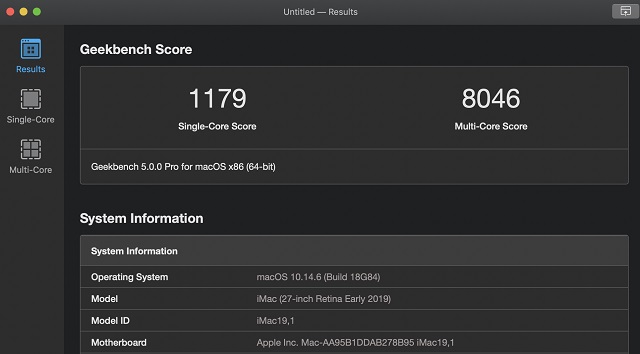 Novabench is a relatively new program for stress testing CPU, but it comes with some great features that can be helpful to the general users. Apart from benchmarking your CPU, it also detects glitches– both hardware and software and allows you to resolve them instantly. Similar to PassMark, it recommends some hardware changes based on their performance in the stress test. As for the simulated tests, Novabench deploys hyper-threading and OpenCL compute test. OpenCL is a standard test among Windows computers and quite reliable to gauge the performance of the PC. So, if you want to try out some new workloads on your CPU, Novabench can be a good alternative. 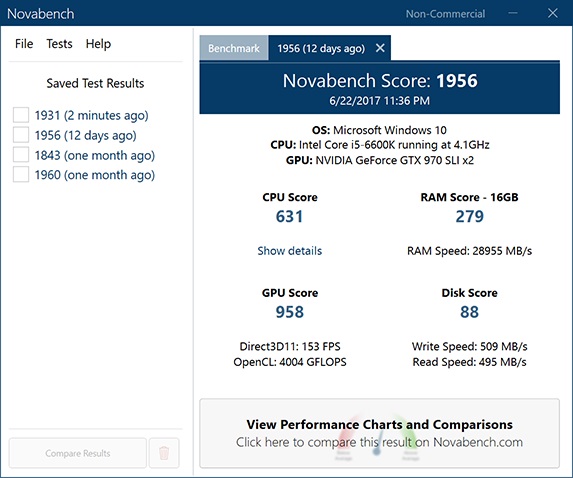 Check Out Novabench (Free for personal use, Starts at $19)

If you are a gamer and want to test your build then UserBenchmark is the perfect tool to measure the peak performance. It calculates a score based on the effective speed by performing intensive desktop tasks like high-resolution video rendering, image processing and more. Further, UserBenchmark uses massive cryptographic operations to push the CPU to use all its cores. It also has a hyper-threaded series of tasks that continuously keep the cores involved to get the highest benchmark score. Simply put, UserBenchmark is a reliable program to stress test your CPU and you should definitely go for it given that it’s completely free. 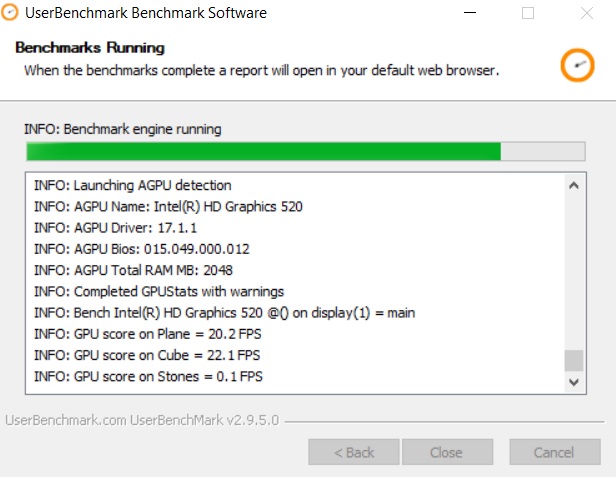 SEE ALSO: 10 Best Thermal Pastes for CPU You Can Buy

Stress Test Your CPU and Find the Peak Performance

So those were our picks for the 10 best software programs to stress test CPU. We have included some professional-grade tools which can torture your PC to no end. And then there are some software programs which allow you to run a series of intensive tasks and offer a benchmark result so you can compare your PC with other computers. Depending on your expertise level, you can choose either method and perform heavy tasks to find the peak performance. Anyway, that is all from us. If you liked our article, do comment down below and let us know your opinion on this subject.

How to Test Smartphone Throttling (CPU and GPU)

How to Check CPU Temperature on Mac