Skip to content
Home Internet What is WiFi 6? Everything You Need to Know

In the world of technology, we are often faced with weird nomenclature which is often hard to understand and explain. Take for example the Intel desktop and mobile chips. If you are not well versed with the topic, there is no way to tell which Intel chip is better than the other. In a similar vein, WiFi standards use one of the most confusing nomenclatures which no normal user can decipher even though we all use WiFi on day to day basis. Well, that all is about to change thanks to the new nomenclature being adopted by the WiFi Alliance. With this new adoption, the WiFi alliance has also introduced the new WiFi standard which brings a host of new improvements. The new WiFi standard is called WiFi 6 and here is everything that you need to know about it:

As mentioned in the introduction, WiFi 6 is the latest standard of WiFi which is bringing a host of speed, security, and connectivity improvements. The current latest WiFi standard which we are using is the 802.11ac which you might have noticed on your router’s or smartphone’s specifications. The new standard which is going to replace 802.11ac in the near future is called the 802.11ax. However, since this nomenclature is very confusing, the WiFi Alliance has released a simple numbering system for WiFi which will make it easier to understand for consumers. Since the latest version of WiFi standard, the 802.11ax, is the sixth instalment, it is dubbed as the WiFi 6. Here are all the WiFi standards released till now in reverse chronological order:

Note: WiFi 1, WiFi 2, and WiFi 3 names are not officially recognised. We are just using it as it makes sense.

As you can see, the older names although technically more revealing were not consumer friendly. However, now by just taking one look at the new names, a consumer will be able to understand if he or she is getting the latest standard of WiFi or not. WiFi Alliance has also introduced new WiFi logos which will make it easier for people to see which WiFi standard they are connected to. The symbols are pretty self-explanatory as they show a number embedded in the WiFi icon, as shown in the picture above.

In conclusion, WiFi 6 is the latest WiFi standard which is slated to be released in 2019. Now, that we know what actually WiFi 6 is, let’s take a look at all the improvements that it’s bringing to the table.

What are the Benefits of WiFi 6 Standard?

The new WiFi 6 standard is bringing a ton of new enhancements. Not only will the standard enable faster connections, but it will also make them more secure and reliable. Here are all the improvements that you are going to get with it:

WiFi 6 is bringing significant speed improvements. While it’s not as big as the one we saw when we moved from WiFi 4 to WiFi 5, it’s still quite a lot. In the perfect WiFi connectivity situations, users can see a theoretical 40% increase in connectivity speeds. The new standard achieves that by improving data encoding resulting in higher throughput. Basically, WiFi 6 devices will be able to pack more data in the same spectrum space. This is made possible by the new chips which are much more powerful and capable than their previous counterparts. 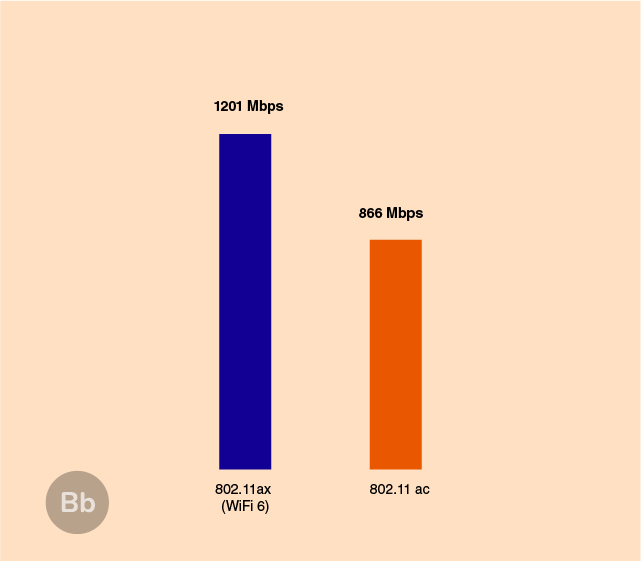 That said, speed is just a small part of improvements which are coming with the new WiFi standard and probably the least important one. The main focus of 802.11ax or WiFi 6 is not to make the connectivity faster, instead, it is to make it more efficient. As you will see in the next sections, WiFi 6 will make our lives so much better and more secure.

The new WiFi 6 standard will operate in both 2.4 GHz and 5 GHz channels. This means that you will have the advantage of not only having long-range connectivity but also higher data throughput. Some tech companies like Apple and Facebook are also lobbying for releasing the 6 GHz bandwidth for WiFi usage. If that happens, it will release never before used channels resulting in lesser congestion and hence better connectivity. 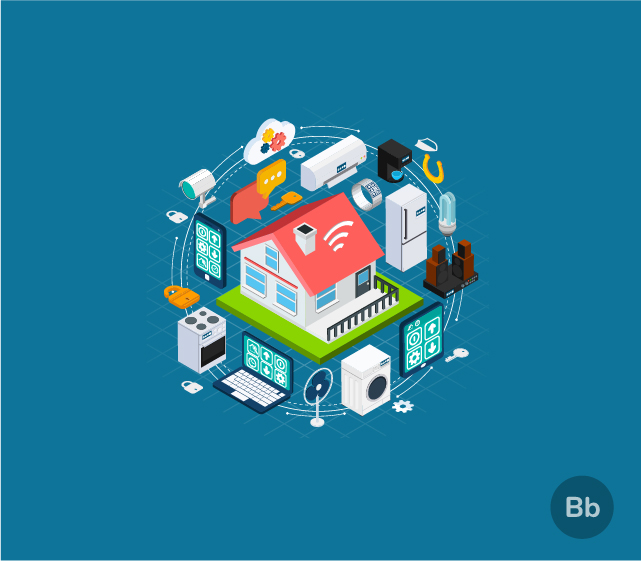 By the way, if you did not understand any of that, don’t worry, we have an article covering everything that you need to know about 2.4 GHz and 5 GHz bandwidths and how they are used. If you want to learn more about it, you can click on the link to read the article. If you don’t want to go through the whole article, just know that the use of both bandwidths will result in a stable connections and longer range and you will see low connection drops and better speeds.

MU-MIMO or “Multi-user Multiple input, Multiple output” is the technology that allows a WiFi access point to connect to multiple devices at once. Before MIMO was a thing, a WiFi access point would connect to one device at a time while other devices have to wait in line for connection. Since the switch actually happens within microseconds, we users don’t notice the switch, that is, till the number of devices is pretty small and there are no other networks causing interference. As soon as you increase the number of client devices for an access point, you will start seeing things like delayed response (Latency) and drop connections. 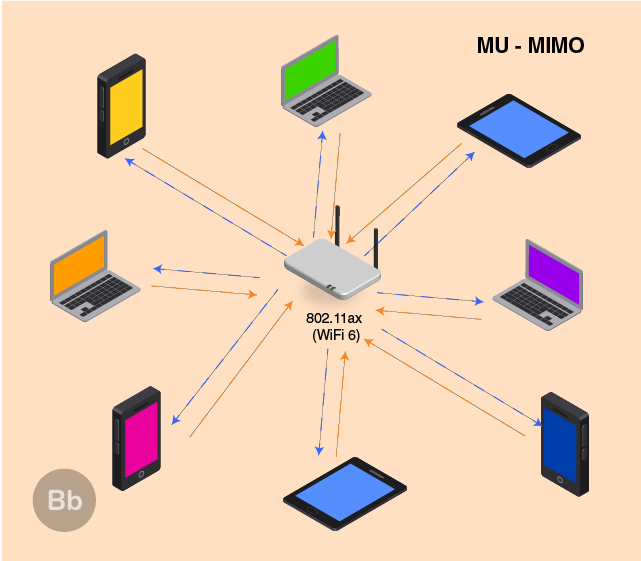 OFDMA or “Orthogonal Frequency Division Multiple Access” is another technology improvement that will improve efficiency, latency, and throughput. This one is a little hard to explain in simple terms but I will try my best, so stick with me a little bit. Till now, the latest WiFi standard which is the 802.11ac or WiFi 5 uses OFDM technology which uses individual channels to carry data designated for specific client devices. The problem with this approach is that it results in wasted capacity. 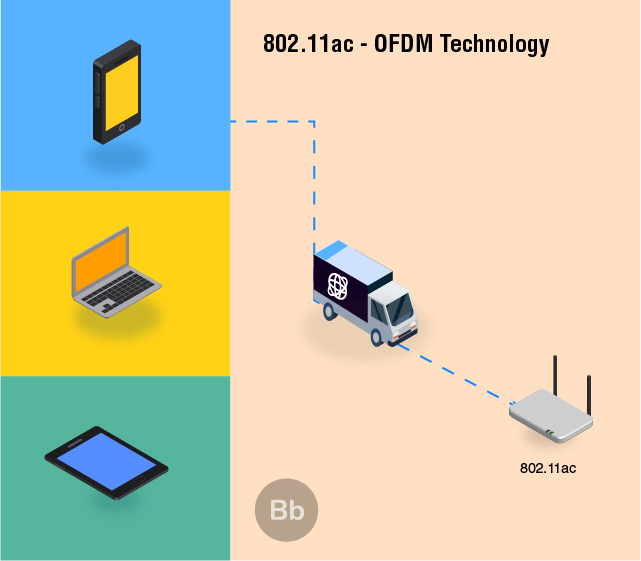 For example, let’s say your smartphone is accessing data from your router. While your router has the capacity to deliver higher data throughput, you might just be browsing Twitter. That means despite you not using your data to optimal capacity, the data transfer is using the entire bandwidth, and that results in loss of capacity. With the new OFDMA technology, the data channel is chopped up so that data from different devices can be bundled together to ensure that no bandwidth is wasted. 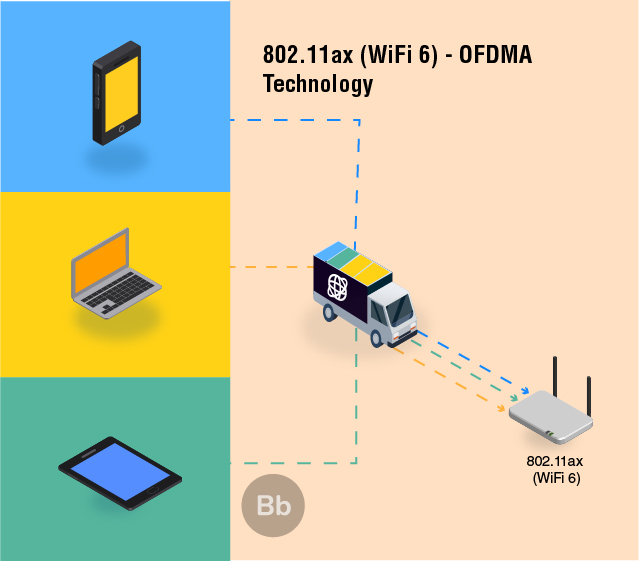 Since multiple devices are able to send data at the same time, it not only improves efficiency but also results in lower latency. This together with MU-MIMO enhancement improves the connectivity even if there are 30 devices connecting to the same access point at the same time.

BSS Coloring is one of the biggest improvements coming with the new WiFi 6 standard. One of the main problems with current WiFi standard is not the throughput rate rather the amount of interference which causes that rate to drop. At any moment, we are surrounded by multiple access points (routers, security cameras, monitors, and more) and client devices transmitting their signals. Since all of them are using more or less the same bandwidth, they interfere with each other leading to a drop in connectivity. 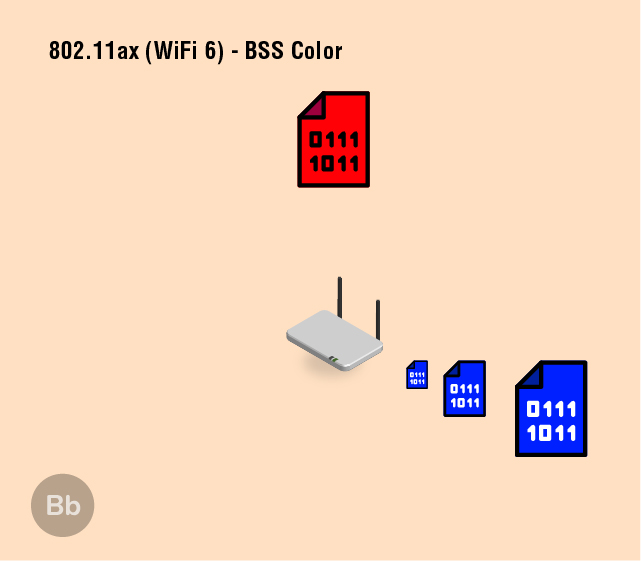 Do note that, for an access point to use BSS coloring effectively, other network signals have to be below a weakness threshold. That means, if you live in an area where other networks’ signal strength is above that threshold, BSS coloring will not work. That said, it’s still a big improvement as it should work in most situations.

Target Wake Time or “TWT” is an awesome new feature which is great for battery life on our mobile devices. Currently, when multiple devices are connected to the same access point and are waiting for their turn to receive data, they all remain awake which drains battery life (as shown in the picture below). With WiFi 6 standard, the access point will basically be able to tell devices in line the exact time that they will receive the connection so that they can sleep while in line. 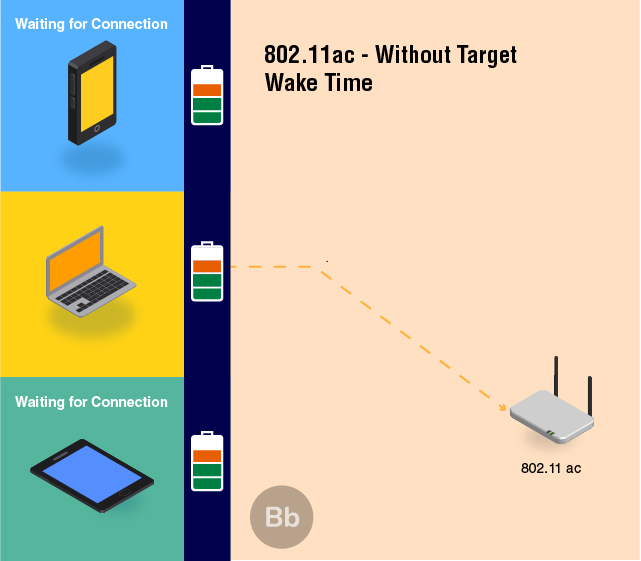 It is kind of like putting appointments on your calendar. Once the appointment is set, your device doesn’t have to anxiously wait for its turn and waste battery life. It can just wake up at the right time and receive data. Theoretically, this should allow a device to use 7x less power on WiFi than they currently do which should result in better battery life. 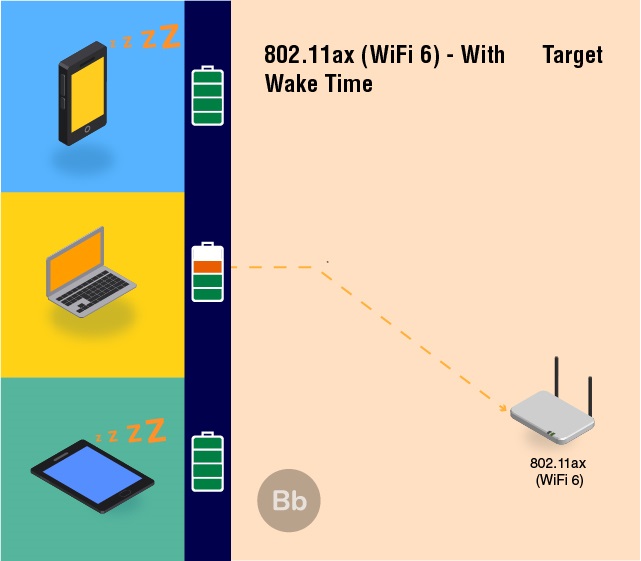 These are all the major changes that are coming with the new WiFi 6 standard. Now, let’s see when we can hope to enjoy these improvements.

When will We See WiFi 6 Certified Devices?

Since WiFi 6 standard is set to be ratified sometime in 2019, we should see WiFi 6 compatible client devices by the end of 2019 and the start of 2020. That said, depending on the user’s upgrade cycle, it might be at least 3-4 years before the industry shifts to the standard. As far as WiFi 6 capable access points (routers) are concerned, some of the early mover companies including Asus (ASUS RT-AX88U – $346) and NetGear (NETGEAR Nighthawk – $399.99) have already launched some products. 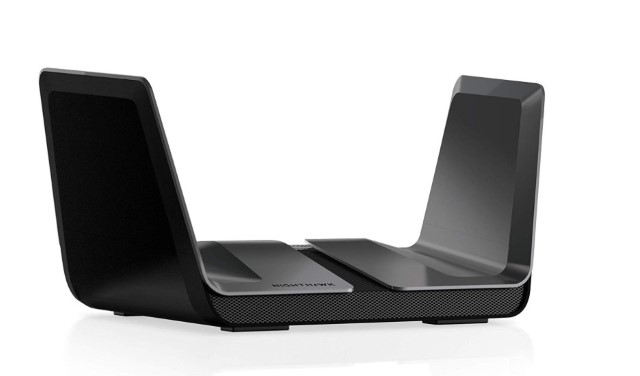 So, if you are ready to upgrade your WiFi router, you can do so right now. But to enjoy the benefits of WiFi 6, you will need to have compatible client devices (smartphones, laptops, etc) and those should start coming out by the end of the year.

SEE ALSO: What is Massive MIMO And How it Paves the Way for 5G Adoption?

As you can see WiFi 6 is bringing a ton of improvements. The biggest beneficiary of these improvements will be crowded areas where either a couple of APs are serving too many client devices or there are just too many APs. Since WiFi 6 both enhances the number of devices an AP can handle at the same time and decreases connectivity drops and latency, it will improve your overall experience whenever you are in a public place like a concert or a mall or an airport.

WiFi 6 is also meant for the new world we are living in. We use tons of smart home devices in our homes. According to professional estimates, a single city home will be having around 50 client devices in the near future. The new WiFi 6 standard will ensure that all those devices are connected, receive data according to their requirement, and don’t get in the way of each other.

So, are you excited for the new WiFi 6 standard? Do let us know in the comments section below.