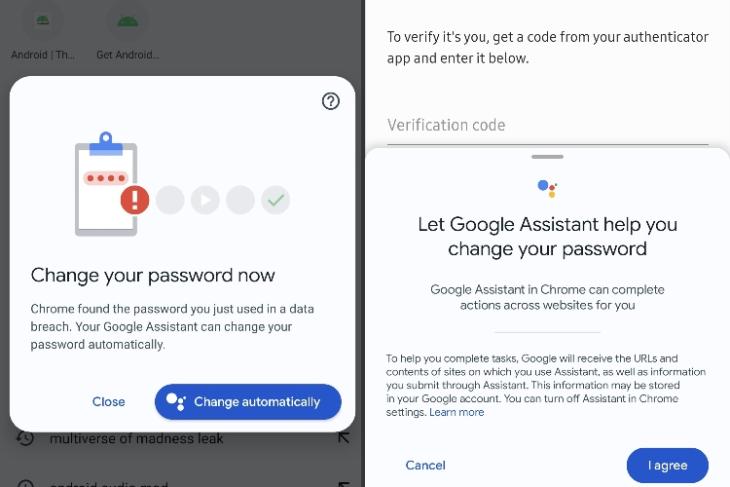 If you use Google Chrome on your Android device, I’m sure you are familiar with a feature that prompts you to change your password on a website if your password is detected to be a part of a data breach. Now, Google has started rolling out a nifty change that triggers the Assistant when a risky password is detected and enables it to change the password automatically on behalf of the user. Check out the details below.

It is now said that the ability to change compromised passwords with Google Assistant’s help is now rolling out to a wider audience. The feature was recently spotted by reputable tipster Max Weinbach, who took to Twitter to share a couple of screenshots of it. You can take a look at his tweet attached right below.

Now, as seen in the screenshots, when Chrome detects that a user’s password on a website has been compromised in an earlier data breach, the app prompts the user to change their password. In a pop-up dialog box, there is a new Google Assistant-branded “Change automatically” button.

Tapping this button will bring up a confirmation box (second screenshot) and following that, users will be taken directly to the affected website to change their passwords and set up a new one. Here, users can either put in their own password or allow the built-in password generator to fill it in and save it.

Now, it is worth noting that the entire process will be handled by Google Assistant. Although users can take over the charge at any point during the process. Furthermore, the feature is currently limited to a handful of websites. However, Google is gradually expanding its list.

To recall, Google announced that it will roll out the said feature during its Google I/O event last year. It is built on the Duplex on the Web technology and lets Google Assistant automatically change users’ passwords on Chrome for Android. It is primarily an extension of the breached-password-detector feature in Chrome and aims to simplify the password-changing process.

The feature is said to be rolling out to select Chrome users on Android. Google is expected to roll it out to more users in the coming weeks. Stay tuned for further updates, and let us know your thoughts on this change in the comments below if you end up using it.