There are a lot of major players in the virtual assistant field. We have Apple, with Siri; Google, with Google Assistant; Microsoft, with Cortana, and more. Even SoundHound (the music recognition company) has its own virtual assistant now. While I absolutely love the fact that there are so many competitors in a field that is growing rapidly, how do we figure out which one is on top? In this article, I’ll put Siri, Google Assistant, and Hound to the test, and see which one fares the best.

One of the most common ways I use virtual assistants on my phone, is to check for the weather. So, let’s first see how these assistants handle weather related queries, for both current, past, and future dates.

Starting off simple, let’s just ask each of our assistants about the current weather in our location. 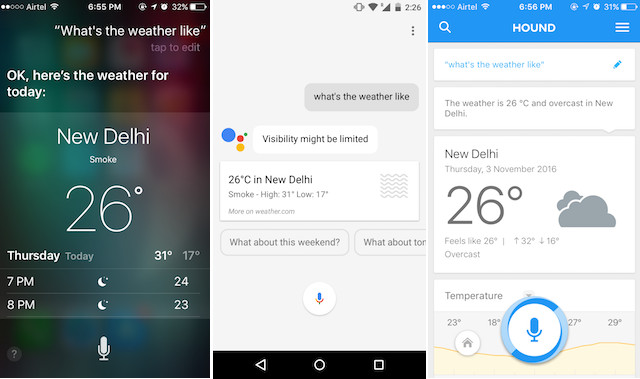 They handled it perfectly, no surprises there.

2. How about tomorrow in New York?

Let’s take things up a notch, and ask about a future weather prediction in another location. 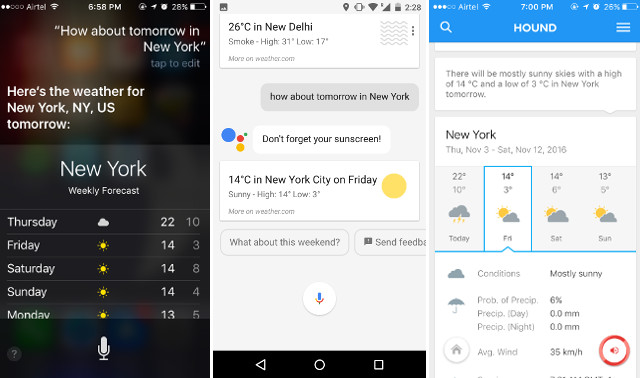 The answers were what I was expecting, and each one of them manages to handle the query.

3. What About Two Months After?

Let’s check if we can get our assistants to tell us about weather predictions further into the future. 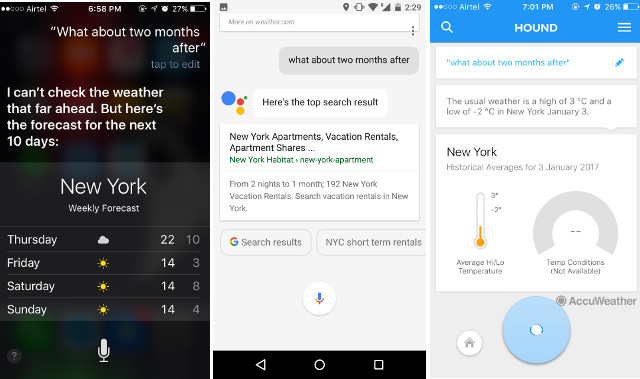 Okay, that was interesting. While Siri can’t access future weather updates, it does make up for it by displaying the weather for the next 10 days. But, Google Assistant gets completely bamboozled and offers me with a web link to New York apartments. What?

4. Did it Rain in New Delhi Three Days Ago?

While we’re at it, let’s ask about weather in the past, as well. 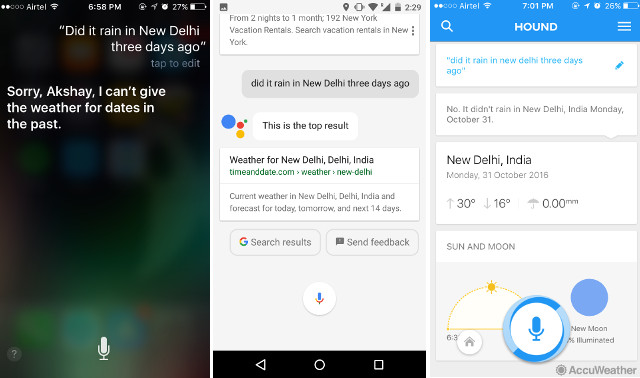 While Siri completely fails to give me weather details, Hound is still able to do it for me. Google Assistant failed as well, but gracefully, by providing me with a web-link where I can find the weather details for New Delhi.

Context based search, and responses are one of the most touted features in most virtual assistants. So, let’s put our three assistants to the test, when it comes to handling context based queries.

1. What position does Gareth Bale play in?

Let’s first ask each of our assistants about the position that Gareth Bale plays in. 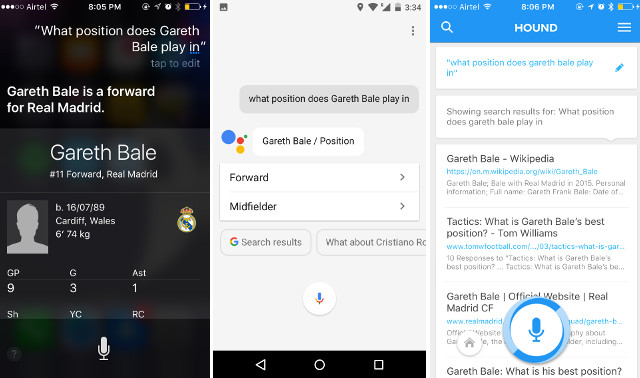 Hound apparently doesn’t want to display information in that neat, formatted way that Siri and Google Assistant do.

2. And What About Cristiano Ronaldo

Let’s move on to checking if we get any context based responses. 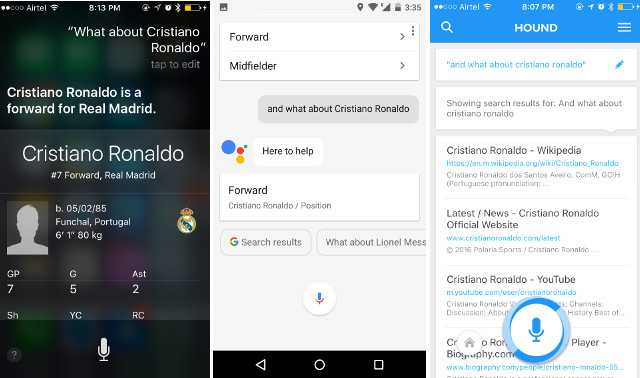 Once again, Siri and Google Assistant gave the answers I was looking for, but Hound simply came up with some links to places I might get the answers at.

3. What Team Does He Play For?

I’m now checking to see if they understand that by “he”, I mean “Cristiano Ronaldo“. 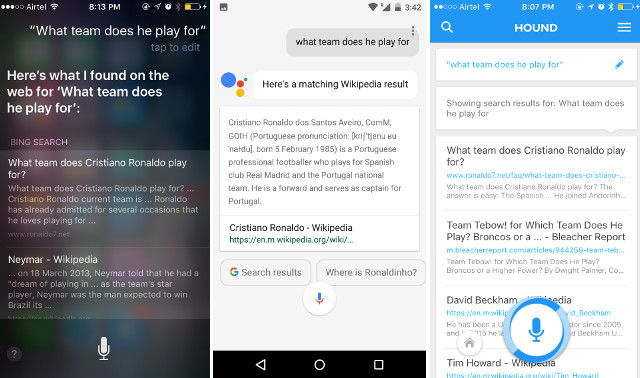 This time around, Siri has stopped giving results in cards, as well. Google Assistant is still presenting great results, and reading them out. I’ve actually lost hope that Hound will catch up, although the links it is giving are actually the right ones. So, points for that, I guess.

4. When is Their Next Match?

I want to make it even more complicated, so I’m checking if they understand that “their” implies “Real Madrid“. 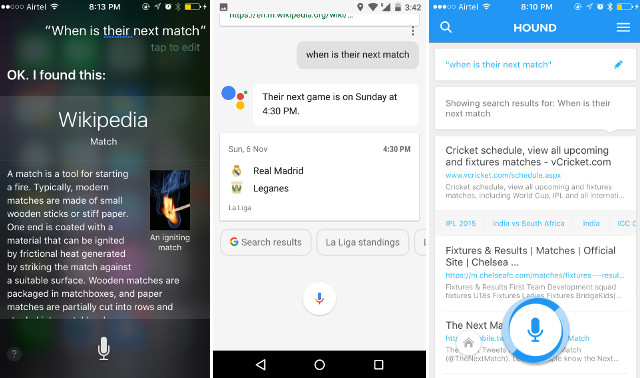 Oh, wow! Siri’s result is absolutely out of context; Hound’s result is at least about sports matches (just saying!). However, Google Assistant is on point! I’m loving this! But Siri… wow! I’m sure it’s not “Siri-us”. Heh.

One of the less “important” parts about the usefulness of a virtual assistant – quirks, and wit – do add a human (and fun) element to what are otherwise only some really well written pieces of code. So, let’s check out some of the fun things these assistants can do (or not do), shall we?

For starters, I asked each of the assistants to tell me a joke. 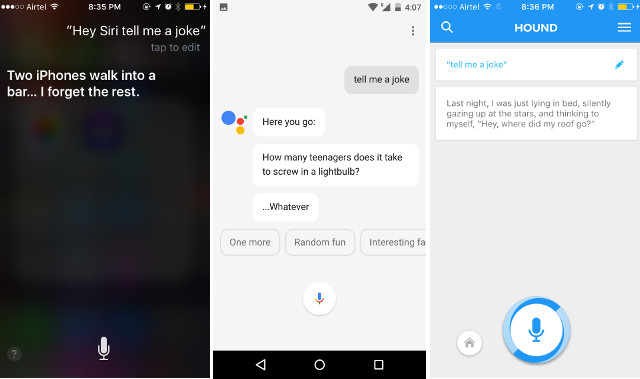 Well, all of the assistants can crack jokes. Not necessarily good ones, but they can!

Let’s see if our assistants can sing, then. 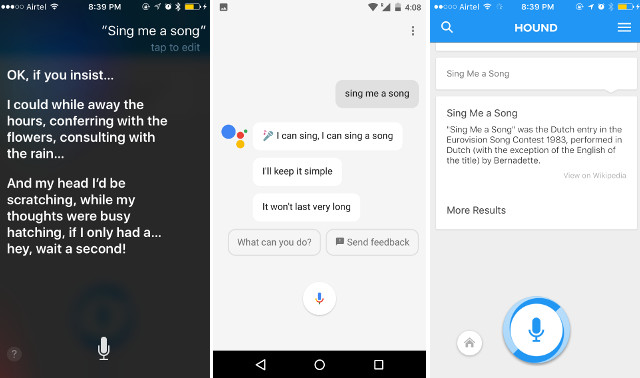 Siri can sing, although not in tune; Google Assistant sings really well, to be honest. And hound… well, it tried to be useful, at the very least. Although, let’s not judge it too harshly, after all, singing was not part of their job description.

Let’s see whether we have any poets in our virtual assistants! 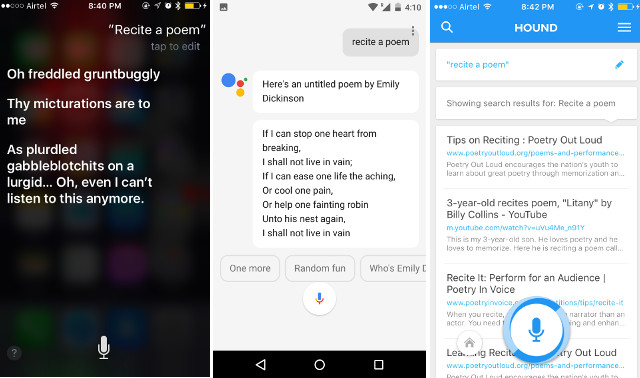 In this case, Google Assistant actually read out a poem by Emily Dickinson. That’s awesome. Siri, made it rather funny, and Hound, once again, tried too hard to be useful.

Ready for a Star Wars easter egg? Let’s see if our assistants are! 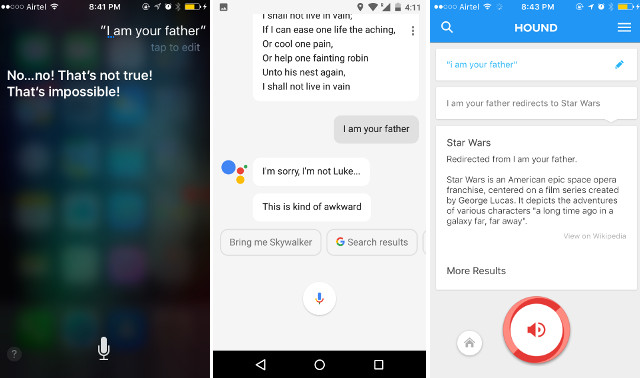 Another useful thing that one might use a virtual assistant for, is keeping up with the latest in the world of sports.

1. When is the Next Clippers Game

First, let’s ask our assistants about the next game that the Clippers will be playing. 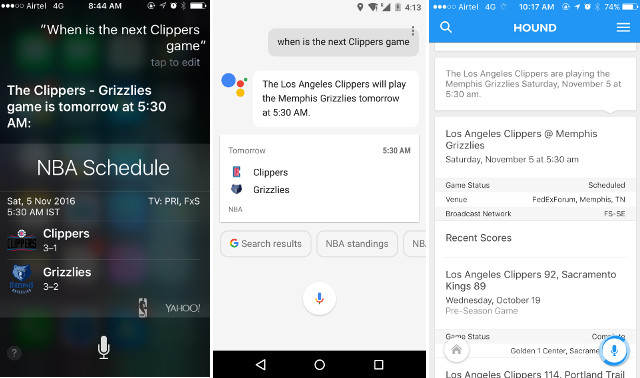 2. What is their Roster?

Let’s see if we can ask our assistants about the roster for the Clippers. 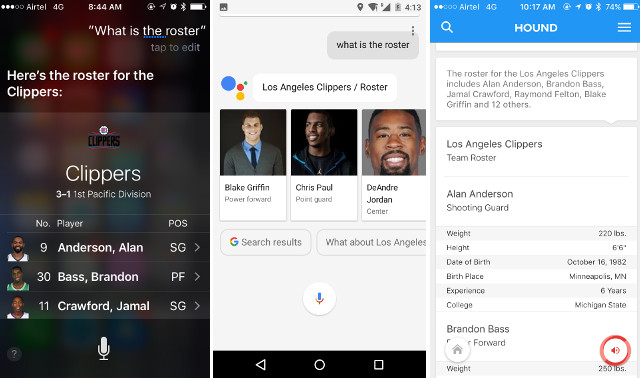 3. What are the La Liga standings?

If you’re interested in football (soccer), then you might want to use your assistant for information about your favorite leagues. Let’s try asking for the latest La Liga standings, and see how they’re looking. 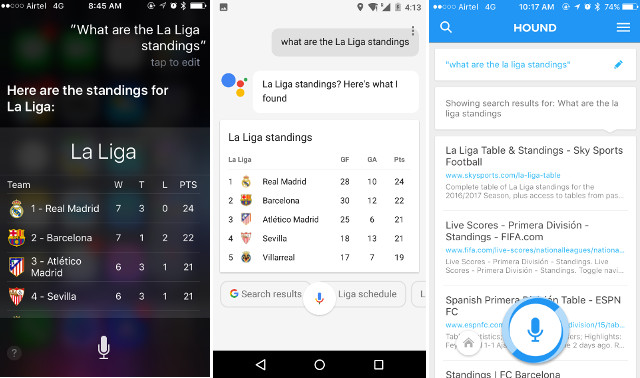 4. When is the next Real Madrid match?

Next, I’ll ask each of our assistants about the date of the next match that Real Madrid will be playing. 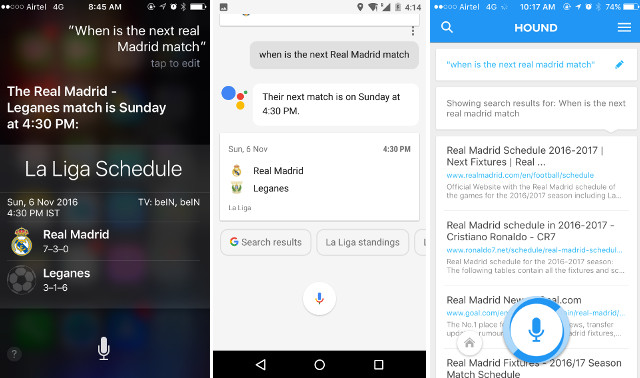 Siri, and Google Assistant, both provide answers in the way most people would expect, however, Hound simply offers results from a web search.

Siri vs Google Assistant vs Hound: Who Wins?

One thing is immediately clear from the tests we did. Google Assistant is quite simply the best out of the three. It excels in context based queries, and recognizes speech perfectly, and extremely quickly. Siri is good at recognizing speech, but tends to lose context quickly. Hound, on the other hand, is good, and it sure tries its best to compete, but it isn’t quite there, yet.