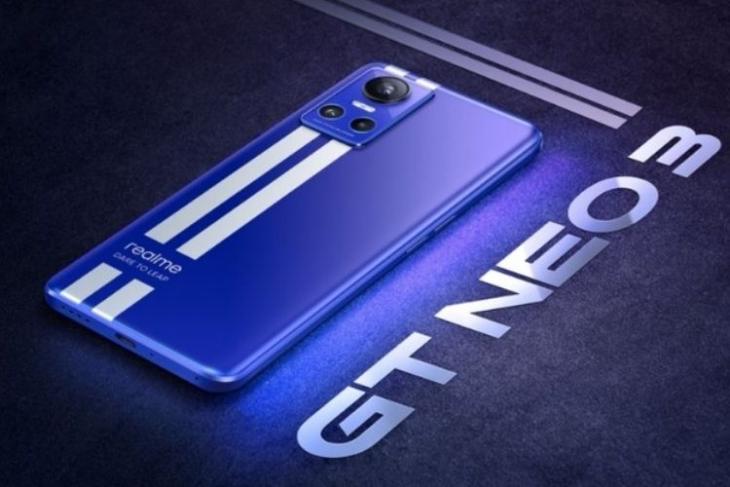 Realme recently revealed that it will launch the Realme GT Neo 3 soon, and now, the company has confirmed to unveil the device on March 22 in China. The company also confirmed the phone’s chipset and fast charging capabilities. Not just that, it has gone ahead to show off the design of the Realme Gt Neo 3, and here’s your first look.

This Is the Realme GT Neo 3!

The company has shared a teaser image of the Realme GT Neo 3’s back panel, which while revealing its launch date – March 22 at 2:00 PM China time (or 11:30 AM IST). The phone is seen with a rectangular rear camera hump, which features three cameras arranged in a triangle, similar to the design of the Vivo X60.

The difference is in the inclusion of two white stripes running down along the camera setup, including a “Realme | Dare to Leap” slogan. This appears like a race track, which is symbolic of the phone’s high-speed performance. All this is packaged in an attractive blue chassis. We expect more color options to be unveiled at the time of the launch!

The image also reveals that the GT Neo 3 will feature a volume rocker on its right edge, the power button on its left edge, and a USB Type-C port (along with the speaker grille) at the bottom edge. It won’t have room for a 3.5mm audio jack.

As revealed earlier, Realme GT Neo 3 will be powered by the latest MediaTek Dimensity 8100 chipset and feature its recently announced 150W fast charging tech. This technology is claimed to charge 50% of the battery in just 5 minutes, which is pretty impressive.

Other details aren’t known as of now. However, a previous leak suggested that the phone will sport a 6.7-inch OLED display with support for a 120Hz refresh rate. It is expected to come equipped with up to 12GB of RAM and 256GB of storage.

As for the cameras, we can expect a 50MP main shooter with a Sony IMX766 sensor and OIS support, an 8MP ultra-wide lens, and a 2MP tele-macro camera. A 16MP front camera is also expected to be onboard. A 4,500mAh battery, Realme UI 3 based on Android 12, 5G support, a mid-range price tag, and more will also be in tow.

Nonetheless, to get a more conclusive idea about the Realme GT Neo 3, it’s best to wait until the March 22 event. We will keep you updated, so stay tuned. Also, do let us know how you like the GT Neo 3 design in the comments below!