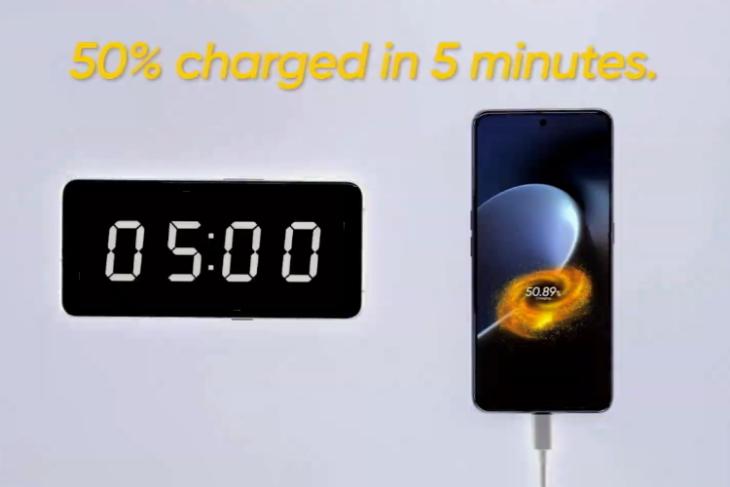 Following several reports, Realme has given us a sneak preview of its upcoming “UltraDart Fast Charging” technology today. The company announced the 150W UltraDart Charing tech at its MWC 2022 event and shared a few details about the upcoming fast charging technology. So, let’s take a closer look at what we know about the tech so far.

Realme’s 150W UltraDart Charging technology has been in development for the past 4 years, as per the company. It is similar to Xiaomi’s 200W charging tech that the company unveiled last year, and is designed specifically to support charging powers between 100W – 200W.

As per Realme, the upcoming UltraDart Charging architecture will rely on three key technological advancements developed by the Chinese giant. It will leverage multiple charging pumps to increase the charging current delivered to a device. That means the charging system would be able to charge a device much faster than current fast-charging technologies. Realme says that it can charge future Realme devices supporting the 150W charging tech from 0% to 50% in just 5 minutes.

To tackle the thermal and throttling issues of smartphones, Realme has integrated an “Ultra Heat Management” algorithm that keeps the rising temperature in check. Realme says that it would keep the temperatures below 43-degree Celcius. Lastly, the UltraDart Charging system will use industry-leading lithium-based batteries that can handle higher maximum charging current in smartphones.

Coming to the devices that will support the UltraDart Charing architecture, the Realme GT Neo 3 will be the first one to support the 150W fast charging tech. Hence, the Realme GT Neo 3 will come with the world’s fastest charging speed. Although the company did not reveal the launch date of the GT Neo 3, it promised to share more information in the coming days. So yeah, stay tuned for further updates, and let us know your thoughts about Realme’s upcoming fast-charging tech in the comments below.